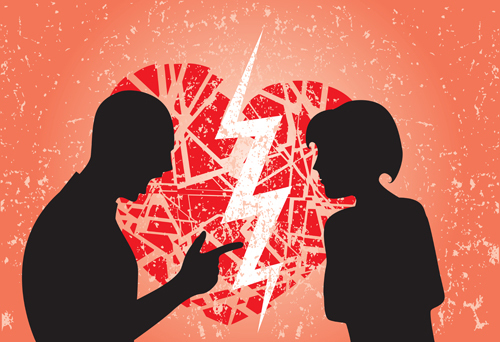 From a very young age my goals in life were to marry my high school sweetheart, settle down, pop out babies and be a hot mom while living a peaceful middle-class life full of granite counter tops, shabby-chic décor, and trips to Target.

Problem was, as it turns out, I'm not a shabby-chic-straight-and-narrow-path kind of girl.

Another thing I don't feel I am, in my heart of hearts, is a cheater. But while I was well on my way to achieving these goals that weren't really my goals, I had an affair.

And it saved me.

I had just married my high school sweetheart, and the most amazing man any woman (any woman other than me, apparently) could ask for. All he wanted were all the things I'd thought my entire life I'd wanted too. I expected that this marriage would ease the depression and anxiety I had been suffering with for years. The world I had dreamed of for as long as I could remember was there in front of me, but it didn't make me feel any better. In fact, it made things worse. I felt trapped.

After we had been married for all of four months I was presented with the opportunity to have an affair. I made the choice to take it with full knowledge of the possible consequences. I really weighed all of my options and thought way past the "expected" benefits an affair would have offered: affection, attention, and a few screaming orgasms. I knew I would gain so much more if I chose to move forward, and I did.

In the end I realized I needed to end my marriage instead of fight to make it work. I learned that I would probably never be fulfilled while in a relationship with this wonderful man, and it seemed best to get out (embarrassingly) early than wait for years until I couldn't take it anymore and things were inevitably more complicated.

Up until this point I had always been the pleaser. I had always judged my own worth by the way I was viewed by other people. Choosing to let someone down was an extremely painful step to take, even before I got caught. And of course when it all blew up in my face, as it was bound to, the pain was like nothing I'd ever felt before.

I got caught before I had the balls to break the news to my husband, and understandably, shit hit the fan. My bank accounts were closed, my credit cards were cancelled, and the locks to my front door were changed. I literally had to start over. I had no job at the time, and was given half of what was in our bank account, which was $200. I had never been so miserable.

I had also never been so relieved.

For the first time in my life I couldn't care what everyone else thought. My bad behavior was already on display for all to judge, and it didn't make me look good. I knew I couldn't take it back, and honestly, I didn't want to. I just had to embrace my decisions and move forward. I knew I'd find my way, and as long as I wasn't murdering kittens or robbing banks I couldn't let anyone around me down any more than I already had. I felt petrified and liberated all at once.

From there I began to cultivate and live by my own standards. I challenged just about every rule I could think of, just to see if I wanted to break it. Some of them I did, and some I did not. In short, I began to learn who I was and live as Myself.

It hurts like hell to hurt people you love, especially when you actively choose to hurt them. And yes that's people, plural. When you hurt your spouse you also hurt the people who love him, and those who trusted you. But what would have hurt even more were the years upon years I would have spent living a life that was not for me, simply because I was trying to keep others from feeling any pain at all.

Many people have lectured me, saying I could have achieved the same results without doing something so unforgivable. But they are wrong. I never would have led myself down a path less traveled. I had to have someone else show me that it existed. After that I was able to find the route that worked for me.

Looking way back, I wish there had been a guide to show me who I really was before I put myself and the people I loved in this situation. But there wasn't. If this were the only way (and I'm telling you I truly believe it was) to learn how to live my truth, then the lesser of two evils, for both me and my ex-husband, is without a doubt the affair.

I am currently in a committed, loving, healthy, (yet slightly unconventional) relationship with a wonderful man and I am fulfilled in a way I never knew possible. This is not only a testament to him, but to me for learning what I need, giving it to myself and finding a partner who is able to fill in the gaps.

My affair didn't just change my life. It taught me how to live my life. And in that way, it saved me.

Celebrities Talk Cheating
More:
divorceaffairpersonal growth
Newsletter Sign Up
A weekly guide to improving all of the relationships in your life
Subscribe to HuffPost’s relationships email
Successfully Subscribed!
Realness delivered to your inbox