Last week, Hillary Clinton won the West Virginia primary, and nobody noticed or cared, because the week before, Barack Obama won the Democratic nomination outright. Or more accurately, he won the Democratic nomination back in February, but the results in North Carolina and Indiana put an end to the charade that there was still a contest going on. What finally exorcised the ghost of the Clinton campaign? You could be forgiven for not noticing, given the obsessive focus of election coverage in recent weeks on hard-working white working-class white hard-working white American voters in the big states Democrats need to win the election, excluding Iowa, Colorado, Connecticut, Delaware, Illinois, Minnesota, Missouri, Washington, Maryland, Virginia, Wisconsin, and North Carolina. But in fact, a decisive factor in the demise of the Clinton dynasty was the near-total
collapse of Hillary Clinton's support among African-Americans.

I'm not talking about the familiar collapse of Clinton's black support after Barack Obama proved himself to be a viable mainstream presidential candidate by winning the lily-white Iowa caucuses. A second mass exodus of black voters away from Hillary Clinton made Indiana a statistical push, fattened Obama's margins enough to completely
wipe-out Clinton's pyrrhic, pointless victory in Pennsylvania, and broke down the wall of bullshit sustaining the idea that the Democratic primary didn't end in Wisconsin.

After Obama's win in Iowa, her surrogates' public musings about Obama's possible history of crack dealing, and Bill Clinton's now infamous trashing
of the Palmetto State as a consolation prize for the you-know-whats,
Hillary Clinton still managed to pull in about one fifth of the black
vote in South Carolina. Yet from one Carolina primary to the other,
roughly two thirds of Clinton's remaining black support dissolved, only slightly less steep a drop, proportionally, than her fall from this October poll
in which she actually led Obama in black support, to the South Carolina
exit poll. If she had maintained her South Carolina performance among
blacks on Super Tuesday, Potomac Tuesday, Super Tuesday II, and North Carolina/Indiana Tuesday, the net shift would have been more than 500,000 popular
votes --- enough to shrink Obama's popular vote lead to near parity,
and perhaps take the lead on not terribly extravagant assumptions about
non-black liberals who were turned off by the Clinton tactics. 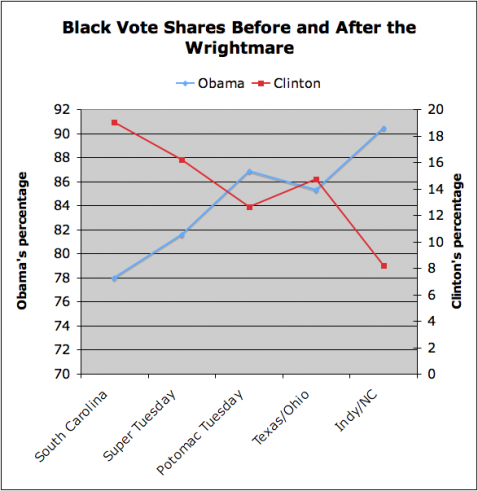 The handy chart to above tells the story graphically. (I've explained
my methodology below.) Clinton's share of the black vote declined by
about one sixth between South Carolina and Super Tuesday --- a period
when national polling showed Obama's support rising across all
demographics, and Clinton's falling --- and declined a bit more than
another fifth between Super Tuesday and the Potomac primaries at the
peak of Obamamania, when (again) all his numbers were improving and
hers were going in the other direction. When either economic and
demographic factors or Plagiarismgate, Goolsbeegate, and various other
pseudo-scandals broke Obama's winning streak in Ohio and Texas,
Clinton's black support rose slightly (by about one sixth) --- just
like her white and brown support.

Then the Wrightmare struck, a thousand innumerate pundits were
launched on a quest to prove that Obama's candidacy was undone before
the slightest credible evidence emerged to support their case (they
were stunningly wrong,
as we now know), and Clinton was only too happy to embrace a wild
long-shot electoral strategy of trying to stoke white resentment
against a strange, dark, foreign, religiously suspect crypto-Communist
who hangs out with sundry terrorists when not spewing elitist contempt
for good, decent, ordinary folk. And what happened to Clinton's black
support? It plummeted by a catastrophic 44.6 percent between the
bookends of the Wrightmare (and nearly a full fifth just between
Pennsylvania and Indy/NC), to the point where Hillary Clinton can
barely attract half the level of black support of George Allen in his 2006 senate campaign (8.2 percent versus 15). Repeat: barely half the black support of George "Let's welcome 'Macaca' here to the real world of Virginia" Allen. All the while Obama's black support rose.

It's sort of incredible that this needs to be said, but future aspiring
presidents, observe the ruins of the House of Clinton and take note: If
you want to be the Democratic party's nominee, you will need some black votes, and 0 percent is worse than 5, which is worse than 10, which is worse than 20. So avoid basing your campaign on the argument that your party's most loyal constituents are worthless. They will (eventually) notice.

How I crunched the numbers: South Carolina is taken as a
theoretical starting point, representing the performance among black
voters Clinton could have managed even after the emergence of an
electable black presidential candidate and her campaign's tactical
decision to royally piss off a lot of black people. I track Clinton and
Obama's subsequent performance on the four
multiple-primary nights since South Carolina --- Super Tuesday, the
Potomac Primary, Texas and Ohio, and Indiana and North Carolina --- by
calculating the total number of votes cast by African-Americans on each
election day and the share of the aggregate African-American vote each
candidate received (that way, e.g., Obama's 86 percent in Delaware, 66
percent in Massachusetts, and 61 percent in New York, are weighted to
reflected the tiny, medium, and huge populations of each state; for
similar reasons as well as the distorting effects of political machines
in individual states, I treat single-state primary days as statistical
noise and ignore them). Figures are generated from the Real Clear
Politics state voting totals and CNN's exit poll estimates
of black turnout and vote shares. No caucuses were included since
primary and caucus voting pools are incommensurate and too few caucuses
had data on black voting to allow for a separate graph of black voting
trends in caucus states. Likewise, the New Mexico, Oklahoma, Rhode
Island, Vermont, and Washington, D.C. primaries had no available data
on black voters.

You can download the spreadsheet here
and double-check me, or if you're curious and industrious, plug in new
values in the C, D, and E columns and track the voting trends of any
demographic group.