It's 5:55 a.m. I've been awake an hour. I'm still jetlagged. And I will not complain. There is nothing to complain about. I've been reading Humans of New York, and while I feel such a swell of empathy for this woman in the picture, I am elated that finally, there is a face to the hidden condition and effects that epilepsy can have. For years, many of us have been petitioning Google to bring awareness to epilepsy for dedicating a day to epilepsy by changing its doodle to purple for seizure awareness -- to no avail.

"I've probably had more than a thousand seizures in my life. I've fallen down everywhere. On the street, the sidewalk, the subway tracks, and down the stairs. I wanted to be a nurse, but I had to drop out of school because the epilepsy took my memory. Anything that I studied at night, I would forget by the next morning. I've got medicine now that keeps the seizures down to once a month, but that stuff messes you up too." -- Humans of New York 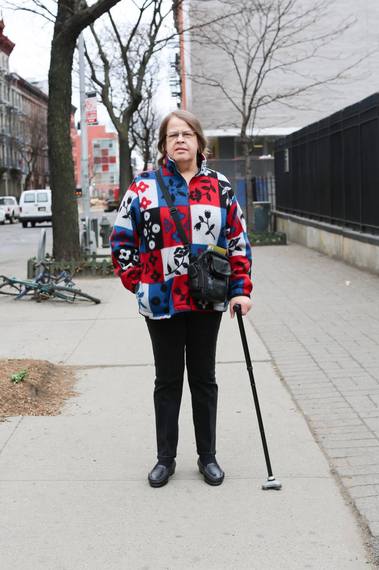 It's one of the "hidden conditions" I suppose -- sometimes, many times, you can't tell someone you're speaking with has epilepsy. Often, they, I mean, we don't have any physical markers. Often, we can go about our daily lives, at play, in school, at work, with friends -- until for that brief moment when things freeze. When things just go blank. Depending on what kind of epilepsy someone suffers from, the experience can go from blanking out in the middle of a conversation as if you have left they physical world for a moment in time only to come back again, to losing the ability to process words, fighting to string a sentence together, because your brain is firing signals wrong and you feel as if you are spouting gibberish. And you are.

It can also be something as random as a Christmas Eve, when you are at check out counter of a Toys R Us, you are paying the bill, and suddenly, you swoon, your head hits cement -- you faint. You wake, confused, awash in a growing pool of warm liquid (you quickly realize it's your own urine) and there are a dozen people around you -- concerned shoppers jockeying to give you CPR, another is the store manager calling 911 and not wanting you to leave because you might sue him, then your family just worried. You close your eyes, feeling that you have failed again, you are not normal -- others have seen it. You just want to go home -- get clean -- you tell the kind person from EMT this -- he says you need to sign a waiver. It is Christmas Eve, the last place you want to be is in an ER in a foreign country. You sign the waiver shakily and slowly get up on your feet and accept ride quietly back to your hotel room and drift back into a dreamless sleep fatigued. The next day you tell everyone you are okay -- you want to be okay. You look at yourself in the mirror and you look rested. You play with your niece and your head spins -- you can not shake the sensation that the world is shaking. You say gravely, bring me to hospital. Two hours later, you are told you have a concussion. It was from the fall. It is Christmas. And because you are surrounded by family, you are grateful.

Or, you could be at play, when suddenly, your body freezes, you fall, your eyes roll back, your little body starts convulsing. You are unaware this is happening because you are somewhere else. This could go on for seconds, or minutes. Those around you will never forget the sight are terrified and panic. They will remember this vision of a 3-year-old shaking forever.

Epilepsy to many is a literally a condition without a face. You can't tell who has it -- only that when it happens to someone you love, it marks you as well, because you are hit with the realization of how seemingly random and almost uncontrollable it is. All of the above were seizure activities I personally experienced. Of all, I can say the two most difficult to manage are publicly falling and the loss of control of speech.

But it is important to note that for as many times as I have fallen -- as the woman in Humans of New York has -- I have gotten up. That is what I am happiest about. This is what I am celebrating this early morning. I count myself very blessed to have had the opportunity to have had great medical care -- to have a doctor who cares about me like a mother -- who is tireless in finding me the right cocktail of medicines that suit me the best. She knows that I want an active life. For years other doctors had given me a list of Do Nots: do not do sports, do not swim by yourself, do not travel alone, etc. My doctor met me and understood this was not going to be how I would live my life. She helped me find medicine to help me live a life that would enable me to complete my Must Dos: complete a half marathon, swim freely in the ocean, travel without constraint. Today when I have seizures, they are much milder. I've fallen down on my bed, lost consciousness, woken up, and then completed a 10K hike with a friend. I don't take this for granted.

My doctor tells me it is a miracle I have no memory loss -- because with each seizure, brain cells die. My heart bleeds when the woman from HONY says epilepsy took away her memory. I am not sure what makes me different. I know I am blessed. I know however how painful it is to lose even a second of time, when you can't remember what happened and you have to rely on the memory of others to stitch things together. "What happened? What did my face look like? How did I fall? How long was I out?" I also know the pain of what it is like to lose control of my ability to speak -- when I was in the middle of a conversation with my father -- I couldn't connect words together -- I don't think I have ever been more panicked, more scared in my life. Thankfully it didn't last long -- yet to know that it was a possibility was frightening.

Most of all, I am not impervious to the effect my epilepsy has had on the people around me. And this is where the real blessing is -- I know I could have grown up surrounded by fear, doubt and constraint -- just waiting for the "next one." My family and friends -- just allowed me to be me -- that is to their credit. I have memories of swimming in the ocean at such a young age -- that my love for the ocean is so heavily imprinted that my parents would never tell me to follow my doctors's advice. They encouraged me to push my limits. I finished a half marathon because my i had friends pacing me -- experienced runners who gave up the idea of their personal best to allow me to get over a personal hurdle. And yes, I had a boss who fired me because he said that having epilepsy put his company at risk -- this was a Fortune 500 firm. I also had several bosses who looked at me and said -- big deal. Just let me know when you need to rest.

Most of all, I am grateful to the protection I have always enjoyed from Light. Yes I have had too many episodes to count -- I've had them happen while driving but I've also been able to stop them by connecting to mind over matter. I remember asking for help to stop that episode on the highway and let me get out the highway so I wouldn't endanger anyone. I got home safely - and drove to church. Then, kneeling in prayer, I had a seizure, of course, I had a family friend who saw me and took me home. My seizures are a result of stress -- but in recent years, especially since becoming a student of Kabbalah and thus deepening my spiritual study -- my seizures have become less frequent, less intense. On the rare occasion they have occurred, instead of laying in bed for days on end to recover, I've been able to gather myself and an hour later give a speech. I know this is not typical. But with epilepsy, what is typical?

And thank you to HONY, I am glad that there is a face to epilepsy -- that now people know that it is no longer a hidden condition. But there are other ways to live through it. We all have our own stories to tell -- each of them is worth hearing. I am grateful that mine turned out differently.I am appreciative of the many people who have shaped my story to have these wonderful twists and turns.