At 5 weeks and 5 days pregnant, with my best friend in tow for moral support, I lay on the table, butterflies in my stomach, waiting for the doctor to point out the baby's heartbeat. But there was nothing but silence -- a silence that stretched longer and longer and louder and louder -- until finally, I asked him what was wrong. He told me there was no heartbeat, this was almost certainly a miscarriage, and I should come back in a week to confirm.

A few months earlier, in May 2009, I'd had my first visit with a fertility doctor to discuss my options for getting pregnant. I had recently broken up with a boyfriend, and that breakup was amicable, mutual and entirely stress free -- other than that it left me single, very much wanting a child and worrying at age 37 that time was running out. I thought about throwing myself back into the New York dating game, but that didn't have much appeal. Imagining my life without a child was unthinkable and in the end, I wasn't willing to risk it. I decided to go it alone.

After three months of inseminations using donor sperm, I was ecstatic to see a faint line on a home pregnancy test. I waited for the early blood tests to confirm that everything was looking good, and then made an appointment for two weeks' time for the doctor to check the heartbeat to ensure all was well.

So when the doctor gave me the bad news, I felt as though I had been slammed into a wall. Everything blurred around me while my friend ruffled my hair and held my hand helplessly, clearly not knowing the right thing to say. I returned a week later, and the diagnosis was confirmed.

I had no reason to doubt my doctor, who was absolutely definitive in his diagnosis. So at 6 weeks and 6 days, I went ahead and had a D&C. There was no clear reason for the miscarriage. The loss of that baby girl was, according to my doctor, "just one of those things." It made it harder to accept.

I had several more inseminations before moving to IVF, first one, then another and another. It would be two years and five IVFs until I heard the words "you're pregnant."

When I finally got the news I was hoping for, I kept it to myself. I was scheduled to go on a family reunion in Israel during Rosh Hashanah, the Jewish New Year, and my plan was to show my parents the ultrasound picture I would surely have in my hands by then. I wanted to let them know in person that their first grandchild was on the way.

Three days before my flight, at 6 weeks and 3 days pregnant, I went to the clinic for a checkup -- alone this time. A different clinic, a different room, a different doctor -- but the same long silence as he looked in vain for a heartbeat and pronounced the verdict: "miscarriage."

It was hard for me to believe it could happen again. "Are you sure?" I asked. "Isn't it too early to be really sure?? There are websites full of stories of women who see heartbeats appearing at seven, eight weeks... are you telling me they are all making it up, or stupid?"

He said he didn't think those women were any of those things, but perhaps they had their dates wrong. Because I had undergone IVF, there was no doubting the exact gestational age of the embryo. I still couldn't quite accept it. Why did I feel nauseated? Why had my blood test shown that my pregnancy hormones were increasing? Surely, these were both good signs? He explained to me that my body simply hadn't realized that the embryo wasn't viable, and that once it did, I would miscarry. He sat with me as I cried, my head in my hands, my eyes squeezed tightly shut against this now-familiar reality. Then he told me to return the day before my flight to be absolutely certain. But even I could see that this was his way of cushioning the blow.

I didn't cry when he confirmed the diagnosis two days later and gently suggested I schedule a D&C when I returned from Israel.

I flew to Israel the next day. My parents tried to hide their own sadness so as not to compound mine; they told me they loved me, that they knew I was strong enough to get through this, and they encouraged me to keep trying. At 7 weeks and 1 day "pregnant" (those jokes that you can't be just a little bit pregnant suddenly didn't seem so funny), I decided to see an Israeli fertility expert -- just in case. I closed my eyes and prayed that he would find a heartbeat. His diagnosis was the same, though. "Look here," he said, pointing to the screen, "the sides of the sac are breaking down. Whatever is in there is already on its way out." It was almost verbatim what my doctor in New York had said. This new doctor preferred a more natural approach to getting the embryo out of my body, handing me a prescription for a medication that would induce the miscarriage. I sent my sister across the square to fill it at the local pharmacy but it had closed early due to the holiday. So I focused on trying to enjoy the week, doing my best to ignore my nausea -- and despair.

Back home, now 8 weeks 2 days pregnant, I was once again on a table, hooked up to an IV, ready to end this. It was the eve of Yom Kippur, the holiest day of the Jewish Year, the day that, according to the Old Testament, God decides whose names will be written in the Book of Life. As the doctor did a final internal check, I took a deep breath, or perhaps it was a long sigh; I'm not sure. I remember thinking that if my life were a movie, this would be the moment he'd exclaim, "There's a heartbeat!"

Which is exactly what he did.

He tried to hide his shock as he spoke. "You are measuring very small, only six weeks when it should be eight. There is almost certainly something wrong with the embryo, you will almost certainly miscarry, but for now there is a heartbeat so we won't be doing any D&Cs today." One of the nurses started to cry, one of them clapped in amazement. I was numb, then angry that he was giving me hope and, at the same time, trying to take it away.

I waited an interminable 3 weeks for the results of chromosomal testing. Days were spent holding back tears while trying to function in the corporate world in which I worked. I spent my nights in a frenzy of research, trying to find any statistic, any website -- anything at all that would give me hope. Not for the first time, I thought back to my miscarriage and felt doubt; what if that baby had been OK? Should I have had a D&C? What if my baby was still alive?

The nausea was debilitating. But when I thought about what might have happened to my first baby -- and what nearly happened to this one -- the anxiety was worse.

Three weeks later, I got the results: normal. My tears became tears of relief.

The baby was measuring so small that until I was 13 weeks pregnant, no doctor would say anything positive about the pregnancy. Even once I was given the all clear, I didn't dare hope too much. At 25 weeks, I was finally told that the baby was measuring what it should. I let out the metaphorical breath I had been holding since that day on the operating table and finally let myself love my unborn baby with no restraint, a love that has grown stronger with each passing day.

I think of the string of coincidence (or are they miracles?) every day: of the first and only time our family decided to celebrate Rosh Hashanah in Israel, thus delaying my scheduled D&C long enough for a heartbeat to be detected. Of the closed pharmacy where my sister was unable to fill that dreadful prescription. Of my own doctor in New York who did not call in a prescription, but instead talked me back into the clinic. I think of all this, and wonder if some higher power was smiling down on my son, keeping him safe that Yom Kippur Eve.

At the point that I was misdiagnosed, one in two hundred miscarriages diagnosed through ultrasound were, in fact, not miscarriages at all but perfectly viable, healthy pregnancies. Midway through my pregnancy, I read that a medical journal in the UK had conducted research that suggested new guidelines be used in diagnosing miscarriages so that healthy, wanted pregnancies would not be terminated unnecessarily. I don't know if the guidelines have also been revised in the United States.

I try not to dwell on what might have happened had I waited an extra week before having a D&C following my first miscarriage. Because if I do, I find myself consumed by a cold fury toward a profession that is indeed fallible, but that also made it possible for me to have my son. It is an uncomfortable irony. If my story had unfolded in any other way though, my son would not be with me now and that, I cannot imagine. I am thankful every single day that what was once a cluster of cells so tiny no doctor could detect him is now a 6-month-old baby boy in the 92nd height percentile. Oliver is big, sturdy, chubby. You could even call him fat, and if you did, I'd smile rather than be offended. He is beautiful in every way -- my own modern miracle of life and of love. 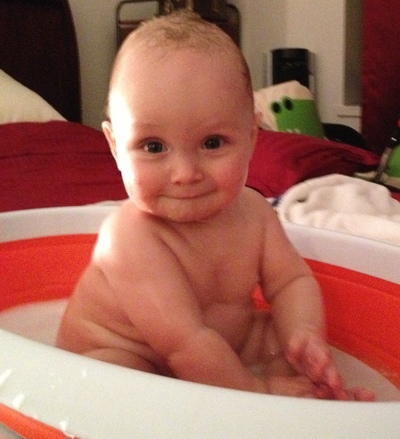 More:
ivfmisdiagnosissingle motherParentsfertility
Newsletter Sign Up
Raise the kind of person you'd like to know
Subscribe to our parenting newsletter.
Successfully Subscribed!
Realness delivered to your inbox