What's it like to figure out you're gay and then begin the process of coming out? Well, for most of my life, I felt doomed. I could imagine no path that would allow me to realize my authentic self. I felt the need to lie, even to myself, insisting: I am straight. When uncomfortable longings for the same sex came up, I drank them down, using alcohol to suppress my gay leanings. Sixteen years ago I finally got sober and gave up the substances that enabled me to numb and escape. That's when I had to face myself. I surrendered to the truth, admitting to myself, then to my therapist, and finally to my family and friends: I am a lesbian. It was only after coming out that I realized how emotionally constrained my life had been. Someone once told me that being in the closet is like living in a vertical casket. Perfect description.

A lot of people think sexual orientation is all about sex. But, at its core, sexual orientation is about identity. After coming out as gay, I soon felt a lot more comfortable in my life, moment to moment. I was finally able to answer the question: who am I? Of course, everything changed. I soon realized I hated wearing dresses and started wearing pants. My style of clothing became more authentically me. A different set of friends came into my life, and I felt at home with them in a way I'd never experienced before. And, there was a new experience of love that was more profound than anything I could have ever imagined. One day, circumstances allowed me to come out on the airwaves. I wrote about that moment in my autobiography, iWant: My Journey from Addiction and Overconsumption to a Simpler, Honest Life. Read an excerpt below:

When you're in the closet, you feel like the sky will fall down if anyone finds out. A lot of the fear is self-generated. While it's certainly good for a day or two of gossip, given all the other cataclysmic events around us, an admission of gayness is usually old news in a week.

I was doing a lot of freelance work during this time, including some radio. One night, in the late summer of 2007, I was on KABC-AM talk radio with a delightful late-night host by the name of Al Rantel. Al is one of those Log Cabin Republicans, which is to say a gay conservative. We were talking about the latest scandal to hit Washington.

Senator Larry Craig had been caught in a men's room stall in the Minneapolis-St. Paul International Airport making what an undercover cop called a foot-tapping signal used by persons wishing to engage in lewd homosexual conduct. While Senator Craig pleaded guilty to disorderly conduct, the Idaho Republican later insisted, "I am not gay."

We were talking -- on air -- about the hypocrisy of people like Craig who had a long record of antagonism to gay rights, having voted against gay marriage and having supported banning gays from serving in the Boy Scouts.

Here I was, on the radio, chatting -- at length -- with an openly gay talk-show host about Senator Larry Craig's hypocrisy, and I hadn't said a word about being gay myself. Meanwhile, Al was regaling his listeners with the story of how he came out. As the conversation wore on, minute after minute, I became increasingly uncomfortable attacking the Senator for dishonesty while I, myself, was lying by omission. I felt like I was trapped in a pressure cooker, and the force applying the pressure was my own conscience. I was torn and had no idea what to do.

Then, during the commercial break, I suddenly remembered Suze Orman. I turned to Al, with whom I felt very comfortable.

"Al, listen, I'm in a relationship with a woman, and I think I want to mention that coming out of the break."

My mind was racing. I only had a couple of seconds to decide. "I think I should call my partner first," I added, quickly dialing Sandra on my cell phone. "Hey, Sandra, turn on the radio. I'm going to come out."

The commercial ended, and we were back, live, on the air.

"Al, considering the subject we're talking about tonight, I want to be honest. I think I should mention that I live with a woman and..."

Frankly, I don't remember what the heck I said after that. But I do remember Al joking, "Okay, is there anyone in this place who is not gay?" 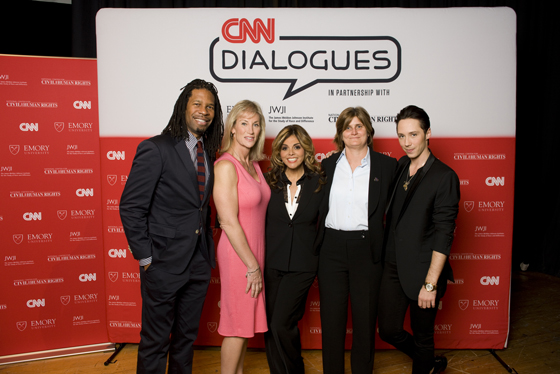 Jane Velez-Mitchell is the host of HLN's Issues with Jane Velez-Mitchell (airing Monday through Friday from 7 to 8 p.m. ET) and author of Addict Nation: An Intervention for America and iWant: My Journey from Addiction and Overconsumption to a Simpler, Honest Life.