"What's this?' I asked a roided-out Gold's gym employee. I was holding a fistful of my own soft, round flesh, which seemed to have suddenly appeared beneath my belly button two Mondays ago.

I was 28 years old, 5' 6" and 120 pounds. I'd always had a flat tummy with the faint outline of a two, or even four-pack. I could eat anything I wanted and wouldn't gain an ounce. I didn't even own a scale.

"That," said the ripped behemoth "is fat."

"Fat?" I repeated, as if he'd spoken in an ancient, dead language (Sumerian perhaps?).

"Yes, that's a little fat donut you've got going on there," the muscle head continued.

"That's not a donut," I said. On further inspection, "It's more of a muffin top."

"That's a cruller if ever I've seen one," he decreed, loud enough for all the grunting and heaving masses to hear.

Apparently, according to the Mr.-Know-It-All, after a certain age, fat deposits in the belly. Basically, it's the only kind of deposit you really don't want.

Ever since that fateful day in the Venice Beach Gold's, I've grappled with that little round hillock of flesh loitering under my belly button, always tempting my breasts to play a game of craps (she's an inveterate gambler). But she's winning. 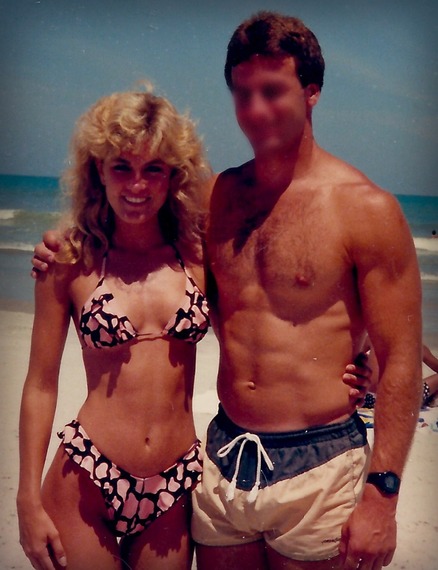 That was then (with ex-beau) 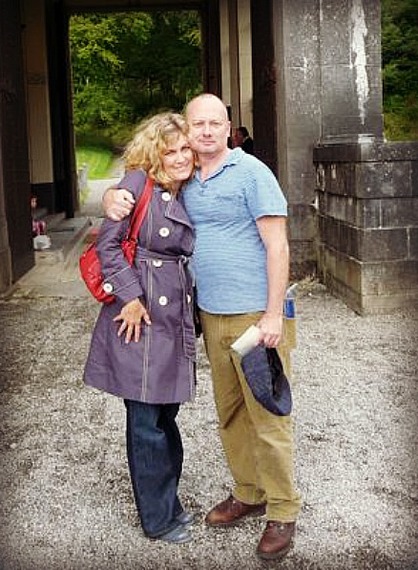 This is now (with hubs, our tummies grappling for turf).

With each passing year, my tummy has grown incrementally. She even seems to have a personality; stubborn, intractable and fractious when she isn't fed. She's particularly fond of Nutella and any type of white flour she can sink her teeth into.

I've gotten into the habit of referring to her as Gertrude. She'd prefer something more glamorous, like Celeste or Guinevere. (She fancies herself a libertine.)

Gertrude demands that I wear dresses and shirts with an empire waist so she can roam at will. She does NOT like to be hemmed in.

And every time I try to put her in a burlap sack and leave her in the desert, she manages to flag down a dairy truck and hitchhike her way back to that gently expanding piece of real estate just beneath my belly button.

After years of cursing her cruel infamy, I gave up. I realized I just didn't have the self-control to regain my two-pack and that I'd have to flip the Kate Moss maxim, "Nothing tastes as good as Skinny feels," on its head.

My mantra became, "Nothing feels as good as Voluptuous tastes."

But I didn't really mean it. Until one fateful autumn evening when my friend Lucille had to leave her 2-year old son, Ellis, in my care for half an hour as she took her older child to piano lessons.

Ellis and I didn't really know each other all that well, so when his mama walked out the door, sobbing commenced.

I pulled out my arsenal of bribery. I offered Sesame Street, I offered dolce de leche ice cream, I offered a puppet show wherein I performed several different roles, I even offered money in unmarked bills.

Ellis was one ticked off, sad little boy, right up until he walked over to where I was sitting, lifted my shirt up just high enough to unveil Gertrude and placed his head on top of her.

Then he assumed the position. Right thumb in mouth, left cheek nestled into a particularly voluminous bit of tummy terrain, free hand patting Gertrude with a great deal of reverence and affection.

So this is what you're for, I exclaimed to Gertrude, and felt such an unexpected rush of affection for her. She was a soft, warm, safe place for a baby to rest his head and she was really good at it.

I decided to accept her as she was and to try, on most days, to treat her right.

That meant no more low-rise jeans. Shirts and dresses with empire waists. And no belts under any circumstances.

Now, when Gertrude lies next to me in bed like a small puppy, I try to remember how Ellis curled up on her, his eyelids fluttering as he found contentment, then slumber.

When his triathlete mom came back to get him she was a bit jealous to see how comfortable and happy her son was in my arms. I suggested she trade her washboard abs in for a soft tummy, then proceeded to offer her a tin of larded duck confit (the French really know how to live!).

If you'd like to see my #LoveYourBodyNow Project: Healing Body Image Issues Through Fine Art Nudes, go here. Or like me on Facebook. And enjoy your Nutella crepes!