When my autistic son, Dominic, was 4 years old he ate nearly every piece of a foam puzzle while I was in the shower. He seemed fine enough when I came out, looked at me with his round, cornflower eyes blinking. He wasn't the least bit distressed.

But I was pretty flipping upset.

"Why did you do that?" I asked him, with the fear in my voice palpable.

He looked unconcerned, but turned his little head up to me.

"What do you think you are, a goat?" I asked him, with the frustration in my voice palpable.

He looked at me still, no expression.

Here's what he was probably thinking: Her face is much prettier from far away.

Here's what he said: Nothing.

Then again, he did have autism and couldn't speak.

I shook my head at him, firmly. "NO!" I said, pointing to the pieces of chewed up foam that remained. "NO EAT!"

He shook his head in imitation. Then again and again.

He was still shaking his head when I wrapped him and his brother in their snowsuits and drove to the children's emergency room.

The doctors there determined the foam wasn't going to cause him much harm, but they admitted him to the hospital for a day of observation. Maybe they just felt sorry for me and thought I could use a break. Pregnant mom shows up with two toddlers in her arms, one with severe autism who has a penchant for eating plastic. You throw her a freaking bone, right? I didn't have the heart to mention I had a 6-year-old daughter waiting to be picked up from school or was perhaps wandering the streets of our neighborhood by that time. Sometimes people can only take so much.

While Dominic was in the hospital, I asked nicely for a psychiatric consultation. Well, I kicked my feet and pounded my fists on the ground and threw a major temper tantrum, but then, after people began to stare, I decided to use my words. The resident said that the child psychiatrist probably wouldn't be willing to come.

Luckily, the resident was wrong.

Since Dominic was diagnosed at age 2, we had seen therapists at school and community mental health. We had seen psychologists and social workers and speech professionals. I was desperate and afraid I wasn't doing enough, giving enough. I spent some days huddled up in the corner of the kitchen, so paralyzed by the daunting task of "fixing" Dominic's behaviors that I, too, was flapping and jumping and rocking. Other days I was developing complicated systems of therapy, aimed at resolving the finger waving, the moaning, the rituals that slowed him down and kept him from my vision of "living." But we had never seen a child psychiatrist and with the chances of another Gregory the Goat-like episode looming, I had so many questions.

The doctor was brisk without being bristly, matter of fact in the most consolatory ways. He said lots of things that day that left Dominic's father and I with a mixture of understanding and fear. It was the first time someone spoke harshly, honestly to us about our son's condition, a condition that was just starting to infiltrate every corridor of the media and overwhelm our functioning.

"Your son has classic autism," the child psychiatrist said. "There's no cure. Anyone who tells you they 'cured' their child of autism didn't have a child with autism. It's that plain."

And instead of sadness, I felt relief.

It seemed okay to me suddenly, to stop fighting the demon then. I couldn't see the demon after all, how could I tell how big and sharp his teeth were? I was sick of my invisible enemy. It was running my life.

It was going to be a battle that would only defeat us all in the end if I didn't find a way out, I had known this but didn't want to admit it.

And something worse had been nagging me for months, something I didn't like saying then and I know makes people uncomfortable to hear me say now. But the truth is, Dominic didn't seem to really mind being autistic. In fact, he kind of seemed sort of... really... happy.

So from that day forward, I stopped trying to cure my son of who he was.

It just meant that I began to expect from him only as much as it was possible for him to give me. Frankly, I just tried to -- still try to -- help Dominic be the best Dominic he could be.

What it really meant most of all is that I stopped trying to banish the autism from Dominic's life (or my life) and just started letting my son live with it.

It was a part of him, just like his blue eyes and love of eating all things foam.

And that's the story of how, instead of shadowboxing the unseen enemy, I invited autism in for tea, but only if he agreed to be on his best behavior.

And it feels nicer this way, for me. I understand it can't work for everyone. Maybe letting go of fighting the diagnosis, for some parents, would leave them with a powerlessness. Maybe some people would see this as giving up, as being weak.

I just see it as getting on with things.

And I don't mind if other parents don't think this is something they can do. I just don't want to have an argument over the whole thing. The autistic community is fractured over so much already.

We are, collectively, the moms of the flappers, the jumpers, the wanderers, the pickers, the groaners, the moaners, the kids that make people stare and laugh and feel sorry for us.

Divisiveness over vaccines and diets and acceptance -- those are just ways to get sidetracked, red herrings meant to divide us. Let's just agree to disagree sometimes.

And let's not get distracted from the real issue, the one that we all seem to universally agree on -- the one that unites even the fiercest enemies in our divided autistic community.

Let's all agree to focus our energy, together, in a much more useful direction, one that every mother of an autistic child seems to embrace wholeheartedly... 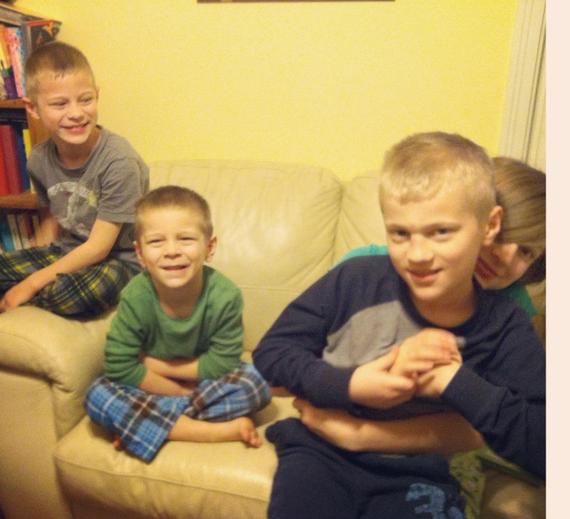 More:
asdautism spectrum disorderacceptanceParentsautism spectrum
Newsletter Sign Up
Raise the kind of person you'd like to know
Subscribe to our parenting newsletter.
Successfully Subscribed!
Realness delivered to your inbox