The bile that I vomited into the kitchen sink was acid. It flooded me like an intimate tsunami and seared my insides. It broke me into thousands of glassy pieces. Shards of glass that should have been around at our feet in such a different way that night. Shards of glass that I otherwise would proudly have stomped upon, while yelling out Mazel Tov, Praise God, or Hell Yeah!

I made it to the sink.

My wife listened from her place on the sofa.

I heaved and lost a part of me I didn't know was there. I must tell my son.

Really, it wasn't the loss so much as the win. It was the win that brought me to my knees. We had done loss before. We could do it again. Right, my sister? You fought the fight of so many good women. The loss was devastating, though not out of anyone's ordinary, really. What were we thinking anyway? The loss I could have done and had done a million times before.

But really, it was the win that brought me to my knees. I must tell my son. And then there I was saying this to myself over and over again. "How will we tell him?" I asked my wife. She didn't know.

We had taken to turning off the news cycles in the days and weeks before that night. This wasn't our norm. We typically watched the news together as a family. Don't get me wrong, there were always plenty of questions.

"Where is Syria, Mommy?"

"Why do people fight sometimes and what is war, Mama?"

"Mommy and Mama, why do some children not have homes?"

"What is a refugee?"

But these recent months, when the words from the television screen became too much, we turned it off. No, I could not and would not explain to my son what that man meant by the words he used to describe women. That was a line we drew in the parched desert sand of 2016, the same year as my son's sixth birthday.

And so we drew a line. And kept him safe. And thought we had it down. This safety thing. We thought we knew how to do it. Just turn off the TV. It will be over soon. Just turn off the TV and then it won't really be there, right? Like a baby who can't find a toy when it is covered with a blanket, for me in this election cycle, object permanence was a slow dawning.

"No honey, but it will be over soon."

"He doesn't like families with two moms, right Mama?'

"Right honey, but it will be over soon."

That night, after Florida or North Carolina or my home state of Pennsylvania or some place that should have been different, when I made it to the sink, I heaved. My stomach pulled in and my breath forced its way out. The bile flooded past my mouth and made its way to the drain. It seared my throat and I broke into pieces. My wife listened.

We must tell our son.

In the morning we did. He climbed into bed with us and closed his eyes. And we told him. Not about the loss so much as the win. And what was lost.

He cried like he had when he was a baby. A deep cry from his belly. "Why would people elect such a meanie?" He said this in between sobs.

Later, I came to understand that there was relief in the telling. There is always some relief in the telling. And, from here we began to climb, again. This happens when something is spoken aloud, doesn't it? The speaking gives us a place to stomp our feet and dig in our heels. Even (and maybe especially) with a child.

We stroked our son's cheek and said to him, "Sometimes things aren't the way we want them to be. Sometimes that means that we have to work harder to get them to be different. It is okay to be sad and mad, and then we get back to work."

"We have to work harder, Mommy?"

"To make sure that people are nice to brown people?"

"And, to make sure that people are nice to families with two moms?"

"Yes, honey. We have to keep working harder." I looked my son and knew that he would work hard and would do it better. Given time and hard work, he will do it better. 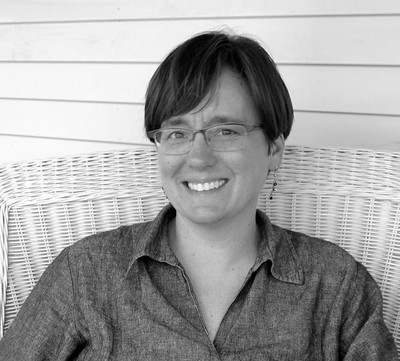 Alice Barber is a mother, wife and psychotherapist for young children. She often writes about parenting, particularly in response to national events. She is the author of Blue Butterfly Open: Moments from a Child Psychotherapy Practice (Gallery of Readers Press 2015). She lives in Western Massachusetts with her wife, son and dog.

More:
Parents2016 electionParenting
Newsletter Sign Up
Raise the kind of person you'd like to know
Subscribe to our parenting newsletter.
Successfully Subscribed!
Realness delivered to your inbox