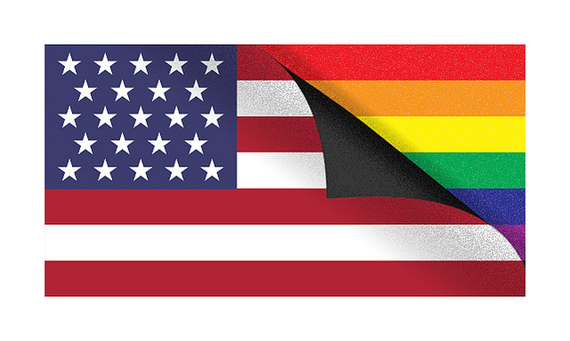 Being a Third Culture Kid -- someone who spent her developmental years outside her parents' home countries -- I never got the cultural coding that provides for a sense of nationalism or patriotism. Seeing the phenomenon in other people has invoked in me a sense of general bafflement, sometimes horror at the things done "for God and Country," and occasional jealousy at not feeling so connected to a place I would tattoo its flag on my body or cry when my team lost a sports game.

Add to the mix being biracial: I have functioned under an assumption of otherness for as long as my memory serves. No matter where I go, even in my passport country of the US or the other half of my ethnic identity Sri Lanka, I am asked "Where are you from?"

To bring my fundamental otherness home: On our yearly visits to Milwaukee to see my (white) maternal grandparents my grandmother would tell me how unfortunate it was my mother married the man she did because I would never really be American. On the flip side, my Sri Lankan father would constantly remind me that I was "too American" to ever be considered Sri Lankan. I internalized racism from a young age and was forced to cultivate a racial isolation that followed me to today: I became a cultural chameleon without a fixed identity.

And in spite of carrying a coveted American passport I never felt any connection to this country, especially with its appalling history of genocide of indigenous populations, slavery, Japanese internment, the modern-day war on women, along with illegal military incursions, rendition, torture, ad nauseum.

Because of that constant otherness I never felt the need to claim a country. It doesn't really matter when you're an eternal foreigner, right?

I met my husband in 2006, he proposed after 10 days and we were married 3 months later. That was 9.5 years ago, and for me marriage was one of the first in the line of game-changing moments that changed me for the better as a woman, a writer, an artist, a human being. I was no longer alone. I was bound to a man who did not judge me, belittle my confused identity or tell me I'd never belong anywhere because I belonged with him. It took several years of his (and my) patience, but I finally got comfortable in the fact that he wasn't going anywhere without me. I let myself become more than just the lonely, rootless, outsider girl who was othered so often she eventually believed that was the only way to live. My husband became -- and continues to be -- my sense of home.

Marrying the man I love was the most profound, beautiful, transcendent thing I ever did in my life. And getting married was one of the best decisions I ever made, and one that has shaped me for the better, and taught me the value of unconditional love. I would not be even remotely the person I am today without my marriage.

On June 26, 2015 I learned that the Supreme Court of the United States had declared marriage equality in all fifty states.

Is this real life?! Was I still dreaming?!

I took to Facebook and Twitter and saw the incredible outpouring of love as people were finally able to share "I do's" with the loves of their lives. Tears streamed down my face at the wedding pictures of total strangers who can finally and openly share an official marriage with their partner.

Marriage is now a universal right in the USA.

My heart began to swell with a new feeling. A strange feeling. One I had never felt before in my empath's life of feeling all the kinds of feelings: I felt proud to be an American.

"What's this?! What's this?!" I was Jack Skellington discovering Christmastown. What The Grinch felt when his heart grew to full size.

That upsurge of emotion added a new layer of tears streaming down my face.

I'm not gay, but I've always had gay pride. And suddenly I had a new kind: National pride.

I've been on this planet for 36 years and never realized what I was missing in not having a sense of attachment with my ancestry. I had an emptiness I chalked up to my nomadic sense of self. Now that the hole is gone I realize it wasn't a hole at all, but rather anger, and disassociation and jealousy's ugly older sister envy that everyone else got to have something I thought I couldn't or wouldn't have. I imagine that's how many of the same-sex couples who are finally getting married felt about being denied their right to wed for all these years.

Later on 6/26, I watched the USA kick China's butt in world cup football -- a sports event that literally the day before I was scoffing at for being a public display of nationalistic nonsense -- and I felt proud to be American. I cheered for my badass team when they won.

I now feel like I'm part of something more than just a stamp on my birth certificate saying "Citizen of the United States of America."

This institution of marriage that saved me from so much sadness is now a right all can afford in this country.

I am so proud of you, America. I am so proud to be one of yours. I'm sorry it took me so long, but here you have me. A proud citizen. A patriot. National pride, baby.

And congratulations to all the new happy couples out there! I wish I could have thrown glitter at every single one of your weddings.

But let's not stop with marriage equality and maintaining an affordable healthcare system. We need still need to deal with pervasive racism in this country. And we need sweeping gun control reforms. And a living wage. And more. We're just getting started, really.

We can do this, America.

As the voice says in Field of Dreams: Go the distance.