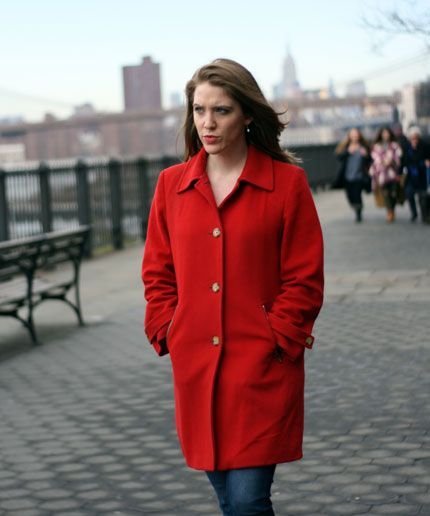 I am 30 years old. My closets are overflowing with wool coats, shiny at the elbows from use, and belts whose leather curves approximate the shape of a woman's waist. But the clothes don't bear marks from my own body; they belonged to my mother, who died when I was 23.

"When we really delve into the reasons for why we can't let something go, there are only two: an attachment to the past or a fear for the future," Marie Kondo writes in her best-selling The Life-Changing Magic of Tidying Up. Kondo's book has inspired people around the globe to go through their belongings and cut back on the clutter in their lives. She urges readers to touch each possession and let go of the ones that don't "spark joy," making room for new items and memories to come into their lives. Part therapy, part organizational guide, the book has inspired viral videos, some based just on the Marie Kondo method of folding T-shirts.

In her book, Kondo describes working with middle-aged women with adult daughters who end up holding on to bags and bags of their daughters' hand-me-downs, concluding, "I think we should avoid creating situations...where a mother's affection for her daughter becomes a burden." The line rankled. What would Kondo say about daughters who are gatekeepers of their departed mother's things?

I had never thought of Mom's belongings as a burden -- mostly they were a comfort, a connection to her -- but after reading Kondo's book, I could no longer close the closet door and ignore the weight of what was behind it.

"It is only when we face the things we own one by one and experience the emotions they evoke that we can truly appreciate our relationship with them," Kondo writes. So on a recent Saturday, I picked up black trash bags, a box of tissues, and a camera and set about going through Mom's things. 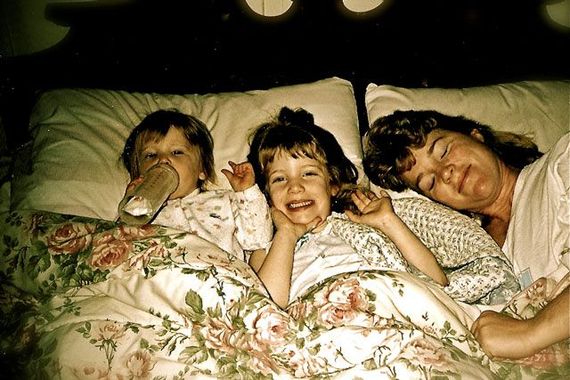 Step one of the KonMari method is to dump every item of clothing you own onto the floor. When I am done, foot-deep piles block my exit like snowdrifts.

The physical weight of the items feels immense, as if the folds are pressing against my lungs instead of the floorboards -- a sensation that seems to justify Kondo's antisentimental attitude toward inherited objects. I reach for the first item that catches my eye, take a deep breath, and get started. 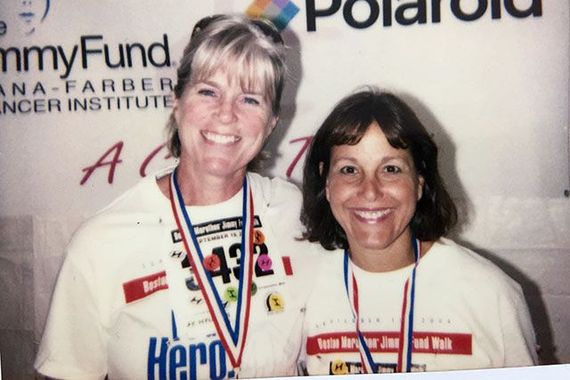 Every October for 12 years, Mom walked 26 miles to raise money for the Jimmy Fund at Dana Farber Cancer Institute. She'd train by walking for miles around our hometown with her best friend, Barbara, the two of them talking about their lives as night fell, their Jack Russells running before them on country roads.

When Mom was diagnosed with breast cancer in 2006 and began treatment at Dana Farber, her best friend walked those 26 miles alone to support her. Mom's favorite sports bra was left behind in a drawer.

Nine years after Mom's death, I put the bra on my own body. The fabric no longer does what it was built to do: support a woman as she goes through the world. I decide to toss it, but when I go for my daily walks now, I envision her setting out just before me to meet her best friend, and I thank her for instilling in me that love of walking. 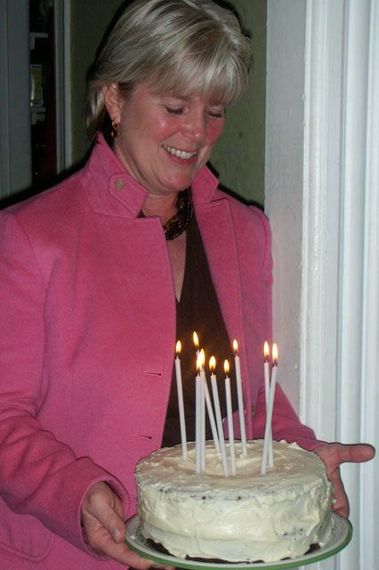 Mom wore her blush pink blazer to visit me when I was studying abroad in Paris at age 20, the bright pink matching her cheeks after a glass of French wine. She wore it to my 21st-birthday dinner in Providence, her matching lipstick staining the cloth dinner napkin. She wore it again on a double date with me and my then-boyfriend shortly after her diagnosis, her cheeks flushed from chemo instead of cabernet.

When I put the jacket on my own shoulders now, it is too big and boxy, a reminder of all the ways she will always seem larger than life to me. I put it in the donation pile.

My mother's hands are the feature of hers that I remember most distinctly. Her watch was a part of her wrist as far back as I can remember, an anniversary gift to her from my father. The dial would get caught in my hair as she braided it into a tight French braid for school; the face would glint as she clutched the steering wheel of her silver Saab.

The wristband is crackled now, perfectly molded to the size of her wrist -- and mine. When I clasp it to my own skin, I look down and feel as if I'm looking down at her. I decide to keep it as a reminder that love can outlast time. 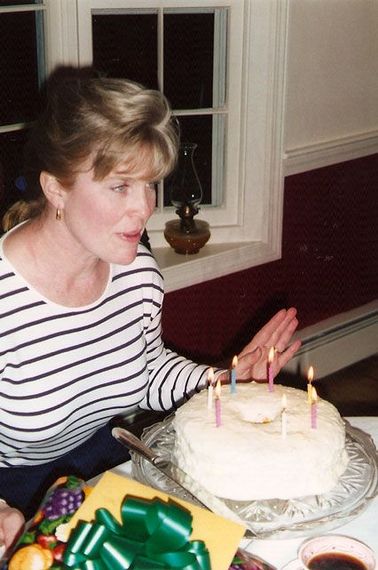 Half of Mom's wardrobe was comprised of striped shirts. She wore them with everything, pairing them with jeans to paint the house or with a skirt and one of her signature blazers to go out with friends. They were as timeless as she seemed to be.

I inherited her love of stripes and have amassed my own collection, slowly replacing her tops with shirts of my own as hers were stained and became worn from use.

As I hold the last of her striped tees in my arms, I realize the two of us have gotten years of wear from it. I have no reason to hold on any longer; my style as a whole is so shaped by hers that it cannot be defined by one "last" shirt. I let it go.

Mom wore this robe on weekends while making omelets, the silk catching the light when she'd reach for the frying pan from the hanging rack by the open window. It reminded me of Saturdays with her when she was well, of the lights and smells of my childhood home.

The same robe clung to her shoulders and the changing shape of her body, post-mastectomy. Touching it now causes me physical pain; it reminds me of the way her disease robbed her of even the small pleasures of her former life.

I decide to let it go. 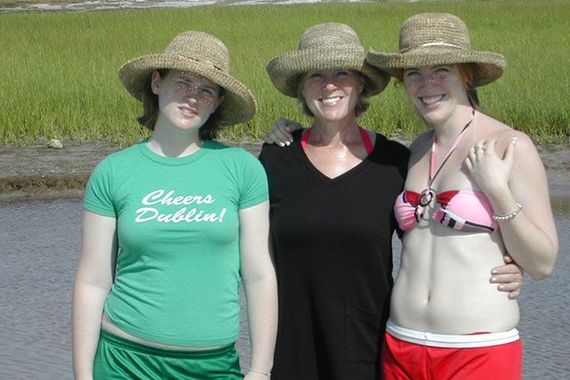 Mom went through many straw hats over the summers of her life. My sister and I inherited Mom's sensitive skin, and we spent most of our childhood covered in sunscreen and mini versions of the woven hats that graced the crown of Mom's head. The hat she wore during the last summer she was well has been hanging on my closet door since I moved into my studio apartment in August.

I pull the hat down on my own head and the smell of straw is as strong as ever. It reminds me of her elegance and practicality and the family vacations I hope to someday share with a family of my own. I decide to keep the hat as a memento of the three musketeers -- and so a part of her can still go to the beach with her girls. 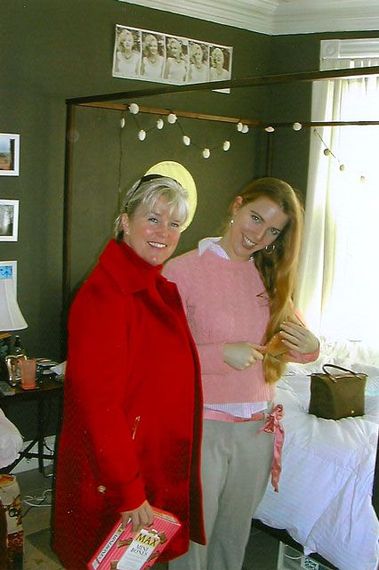 Mom showed up in her new cardinal red coat during my senior year at Brown. Heads turned as she walked down Thayer Street, the brightest thing on College Hill.

I've worn Mom's red coat every winter in the years since her death. The edges are beginning to softly fray; the lining has been ripped and mended more times than I can count.

In the nine years since losing her, I've adopted red as my color, acquiring shoes and sweaters and shirts that make me feel that same vivid sense of her presence...and of my own. I decide to wear it until it falls apart.

Going through Mom's things brought back many memories -- some joyful, some difficult. I'd be naive to think that processing what clothes of hers to keep could ever replace the real work of processing grief or heartache, a false promise threaded throughout The Life-Changing Magic of Tidying Up. An antiseptic home does not equal a mind free of pain.

That said, there is a noticeable lightness to my apartment now and extra space in my closet. But it's not the absences I notice most; it's the sense of fullness imbued in each object I've chosen to keep, objects I hadn't fully appreciated until I undertook Kondo's project to face each individually.

To acknowledge and keep a select few of my mother's things in my home is to acknowledge the ways in which I'll always keep her with me -- and the ways I've grown into an independent, separate woman since. There is magic in that.