When I was 18 and about to head off to college, I felt the need to attend a seminar or workshop before I left; something that would provide a major boost to my self-esteem.

I had felt on my own since my parent's divorce several years earlier -- but this time, I really would be. And, I was about to put myself through college with every student loan I could muster; yet I had no idea what I wanted to do or how I would pay it all back. I was scared and needed something to sustain me.

After a great deal of research, I chose a program near my home in San Diego. It proved to be a weekend of awakening.

One of the rules of the workshop was that we had to be 100% honest in all that we said and did. For example: there was an activity where, in total silence, we had to stand in front of the person we were most attracted to in the room. I was so close to picking my second choice. At the last minute I thought, what the hell. After all, I was in a contained and safe environment and was constantly encouraged to allow vulnerability in.

So, I turned left instead of right and stood in front of my number one. It just so happened that he was attracted to me too. Pretty intense. I could have easily been rejected, which is so often the case in life. But this time, well, it sure pumped me up. I looked around and saw that there were at least 20 people standing around me and even more around him. It was a heady moment that I will never forget. I felt special -- and loved.

Another assignment was to go into nature and bring back something that said, this is me. I loved being in nature. Marshmallow clouds, the powerful force of the ocean, birds of all types squawking overhead, a salamander bobbing its head. . . nature is all of God's creations wrapped in a chaotic, beautiful bow.

My ego wanted me to pick a sea shell to represent how I would ride the waves to distant, exciting shores; or to choose something like a feather to show that I had the strength to let go and trust the wind to guide me. It all sounded poetic, but I knew what I was.

I grew everywhere and nowhere and once in a while, in between. On that particular weekend, I happened to be everywhere. I plucked the first one of me that I came across. It was a big one with sticky green, hairy stalks shooting in all directions. 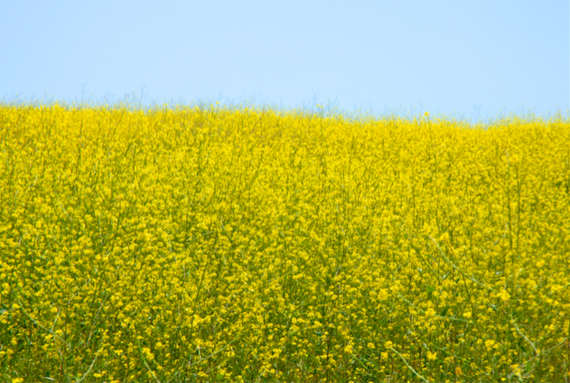 Aside from its permeation, what I have always loved most about the mustard weed are the little clumps of brilliant yellow at the end of each random arm. In the Spring, if you look into the hills throughout California, it's as though the sun itself has swathed a path of brightness along the green --creating a road to somewhere you want to go.

I hid my mustard weed under my shirt and when it was my turn to speak before the group of 100 or so, as nervous as I was, I held my weed up high and said:

Decades later I attended a workshop at a mountain yoga studio. I read the guest speaker's bio on the brochure. It talked about shifts in life, Hindu deities and embracing happiness. I knew I was at the right place.

When Manoj got up in front of the eager audience, he asked each of us our name.

Jody B. Miller is the CEO of C2C Executive Search & Strategic Management. She also writes books about work/life balance, articles about topics we think about (yet don't always talk about), and novels about love and friendship.