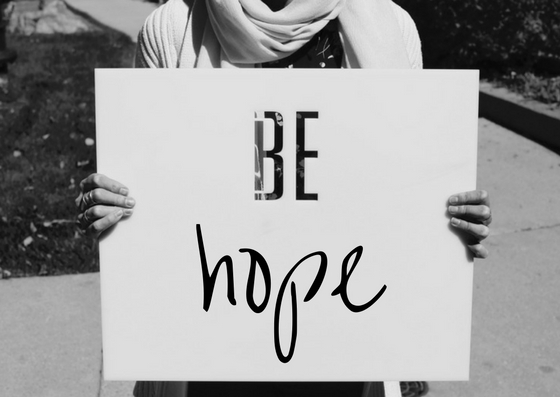 Hope is a necessary concept...what else do you have if you don't have hope? What do you give your kids if you can't give them hope? - First Lady Michelle Obama

Hope. I fear that I may have lost my trust in it. I don't think it is gone, but it is definitely in a bit of a dark place.

I find that every time I open or turn on anything that might deliver some type of news, I lose a little bit more. And Mrs. Obama is right - hope is one of those things that you don't necessarily think about until you are not feeling it. And that, my friends, is what we call privilege.

Hopelessness is a terrible feeling, and unfortunately it is one that many experience not just when our country and world are in a state of change and flux, but every day of their life. People who have faced so many difficulties that they can no longer find any glimmer of hope around them. If you choose to really look, you can see it in the faces of the people in Aleppo or perhaps in a homeless person's eyes or maybe in someone who has faced acts of discrimination time and time again.

And now the holiday season is upon us, and the expectation is that we are cheerful, merry and bright. Yet, when you are struggling to find the hope in things, it can be difficult to feel the holiday spirit in a genuine and real way.

If I'm honest, I have not been excited about the holidays. I've wanted them to come and go - just get them behind me. Yet, when I was a child, I adored this time of year. The anticipation was palpable and it all led up to wondering if Santa Claus would pay us a visit.

That feeling of awe, wonder and blind belief is something that I lost when I stopped believing in Santa. Not immediately, but the holidays did take on a whole different feeling. It was still a celebration, but with a different flavor. Eventually it started to feel excessive and, culturally, a bit out of hand.

And then at some point I stopped hearing The Polar Express bell. It fell silent, and with it went some of my hope. It is hard to know which went first - did I stop believing so I lost hope, or did I lose hope so I stopped being able to hear and see the magic?

In an effort to try and better understand why I've lost the feeling of the season, I tried to invoke the feelings I had as an 8 year old. To imagine the same way I felt on Christmas Eve...waiting and wondering - all with a sense of pure hope.

And that is when I remembered that Santa Claus is not a person - Santa is a feeling. And hope is a state of being. Perhaps if I could evoke the feeling of that belief I had as a child, I could remember what it feels like to be truly hopeful?

I understand the reasons for not being a fan of Santa - that his figure can represent materialism or that his creation is actually a series of lies that you tell innocent children. But if we chose to see Santa as a feeling, than he is something that lives in all of us - if we allow it.

And that is when I realized - It is not about waiting to see if Santa comes, but about being Santa - about being the hope. It is about giving more than getting. It is about showing those people who look hopeless, that you will be their glimmer of hope. If you want to feel hopeful, you have to BE hope.

So, I donated to the charities that I believe in, and I bought a stranger their coffee as they stood behind me in line and I took time to have a conversation with the person sitting next to me on the train. And, you know what, I felt a little more hopeful. It felt a little more like the season I remembered thirty years ago.

2017 is going to bring us even more change and flux, and we are going to need to be the hope more so then ever. So, I am trying to use the holiday season as a way to jumpstart my hope, so that I can carry it past January 1st and into this new year that is ahead of us.

In order to do this, we have to be willing to listen to our inner Santa Claus and as Michelle Obama said, "...find a place in our hearts to love each other. It's really simple, you know? Just opening up our hearts to others. Making room."

Photo Credit: Kïrsten Blake
Adapted from a post on Chapter Be.

More:
be kindhope20172016holiday season
Newsletter Sign Up
An essential daily guide to achieving the good life
Subscribe to our lifestyle email.
Successfully Subscribed!
Realness delivered to your inbox