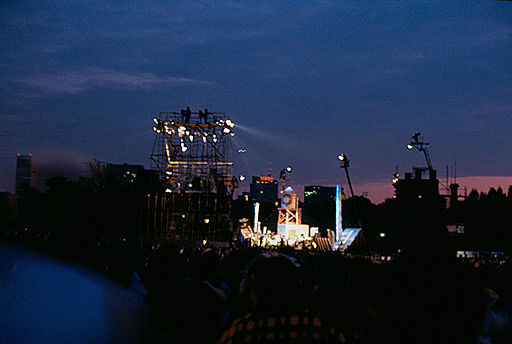 One night while clicking through hundreds of channels of crap, I unclenched the remote to stare at faded footage from a 34-year-old concert in New York City, as the song, "Me and Julio Down by the Schoolyard" lulled me back to a Saturday in September when Simon & Garfunkel performed a free concert on the great lawn in Central Park.

A friend and I had jostled through a 500,000-deep crowd to find a patch of grass from where we would watch the iconic duo sing their songs. I don't remember many details about the concert or after the last note faded into a thunderclap of applause. I don't remember how many blurred faces I passed to get to the street and my eventual destination -- the 68th Street Subway Station.

All the moments that happened before my friend and I stood waiting for the subway scattered into bits of unformed memory until a familiar face appeared in the crowd, and I remembered another reunion that took place that day between me and a guy from high school who I kept running into over the years.

The subway wasn't the first time I had bumped into Jim. I had run into him the year before in a strip mall at a local hangout in Scarsdale. Jim had squeezed in beside me at the bar and said, "You're Sue W's friend."

We talked until the bartender yelled, "Last call," then Jim asked me back to his parent's house. I hesitated and said, "No." He really wasn't my type. I liked tall guys. He was only a few inches taller than me.

Jim and I parted amicably amid promises of "We'll have to get together one of these days," a mundane courtesy that became prognostic reality a year later.

Two weeks before the Simon & Garfunkel concert in Central Park, I spotted Jim on the platform at the Mamaroneck Train Station 40 minutes from New York City. I walked up to him and said, "Aren't you Jeff Salkin?"

"No," he said. "I'm Jim Salkin," and smiled. He had crisp blue eyes that shined when he talked.

We laughed about me fudging his name as we boarded the Metro North Train. Jim was easy to talk to like the night we had met at the bar one year earlier. And talk we did throughout the ride back to the city. When we reached Grand Central Station, Jim gave me his number and told me to call him. I never did. I was 25, living in Manhattan. One day passed, another took its place. After a few days, Jim slipped into the space in my mind reserved for bemused recollections -- until that night after the concert in Central Park.

I still can't believe I found Jim in the crowded subway. An invisible nudge prompted me to turn the moment he bounded down the steps to the platform. I waved and screamed his name -- this time getting it right. Somehow he heard me above the clamor of voices, and shouted "Lauren," and then waved back.

As he walked up to me, I told my friend a condensed version of how I knew this guy called Jim.

"What are you doing here?" I asked him.

"I was at the Simon & Garfunkel Concert."

Our laughter was muted in the rumble of an oncoming train as it rolled to a squeaky stop. The three of us pushed through the closing doors and grabbed onto a pole. Jim looked taller this time, and when he asked me out, I immediately said yes. I didn't want to wait for another chance encounter.

Thirty-four years later, through the up and down years and even ones, too, our union is still strong, outlasting Simon & Garfunkel's short-lived reunion as well as four New York City Mayors.

Our son just turned 26. About the same age Jim and I were when we attended the concert in Central Park. Now we're just anachronisms, like the faded concert footage on TV.

As the credits rolled at the end, I tried to find myself in the crowd. Of course I couldn't but thought -- somewhere in that throng of people there is a young girl who would be leaving the park and walking to the subway station to meet the guy who took the long way to her heart.