Martti Ahtisaari is the former President of Finland and an internationally recognized mediator and peacebuilder. In 2008 he was awarded the Nobel Peace Prize for his lead role in bringing independence to Namibia, Serbia's withdrawal from Kosovo, the decommissioning of weapons in Northern Ireland and autonomy for Aceh in Indonesia.

Upon leaving office of the President in 2000, he founded Crisis Management Initiative, an international NGO specialising in conflict resolution and development issues. He has received numerous awards and decorations including, UNESCO Peace Prize, an Honorary Officer in the Order of Australia and Order of the Companions of Oliver Tambo (Supreme Companion) by South Africa. Ahtisaari is a graduate from the University of Oulu, Finland and holds 19 honorary doctorates from universities all over the world. Lan Anh Vu sat down with Ahtisaari to learn more about his thoughts and experiences on resolving conflict and building peace gained over five decades.

My Early Years I was born in Vyborg, a city on the isthmus of Karelia, which was then still a part of Finland. We lost Vyborg when the Soviet Union attacked my country. Along with 400, 000 Karelians, I also became an eternally displaced person in the rest of Finland. With my mother, I moved from one household to another before we settled in Kuopio. This challenging and tumultuous childhood experience strengthened and significantly contributed to my commitment of working towards conflict resolution and led me to work in the United Nations. Here, over a period of 30 years, I served under five Secretary-Generals of the United Nations.

Early on, I started my career as a teacher and traveled to Pakistan, living in Karachi from 1960 to 1963. In 1965, I joined Finland's foreign ministry, and eight years later I became Finland's Ambassador to Tanzania, with additional accreditation to Somalia, Zambia, and Mozambique. In 1977, I was appointed the United Nations Commissioner for Namibia and the following year I became the Special Representative of the Secretary General for Namibia and I oversaw the country's transition to independence in 1990. After the UNTAG mission for Namibia's independence, I continued as the UN Under-Secretary General before returning to the Ministry of Foreign Affairs in Helsinki.

I then consciously decided to get responsibly involved in politics. At that time, people in Finland were fed up with the traditional political system. I ran successfully for President and was in the office from 1994 - 2000. Upon leaving the office of President, I founded the Crisis Management Initiative (CMI), a non-governmental organization committed to helping the international community practice through effective preventive diplomacy, peacemaking, and post-conflict state building. Since leaving the office of President, I have continued to focus on conflict resolution and chair the CMI.

Challenges My career in peace meditation began in Namibia where significantly I contributed toward the country gaining independence. This experience has had an important influence on my conflict resolution work. My United Nation's Namibia involvement was from 1977 to 1990. The peacemaking process was simple, but it took 13 years of negotiations between the South West Africa People's Organization, a Namibian guerrilla movement, and South Africa, which at the time had an all-white apartheid government that annexed Namibia after World War II. It took very long time to negotiate, but my mediation team and I were determined to not give up before Namibia would win independence. Eventually, South Africa accepted Namibian independence in 1990. What impressed me most during my years in Africa was the enormous capability of Africans to forgive. I believe that despite the inevitability of conflicts, all conflicts can be resolved and majorly they are caused by human beings.

Lessons Learned Peace can never be achieved by one single person. You are highly mistaken if you think that you can do all the negotiation process on your own. This is a misconception and you cannot get it all done yourself, therefore you always need best possible mediation teams. For ideal mediation teams which can address and amicably resolve any nature of the conflict, you need to choose competent people, those you can trust to make an effective and peaceful result oriented team. In addition, you also need to support and empower your colleagues. For instance, I give an amazing amount of autonomy to my team on how to perform duties. When you try to dictate and define exactly what the team should do step by step, then you risk missing out on lots of opportunities. 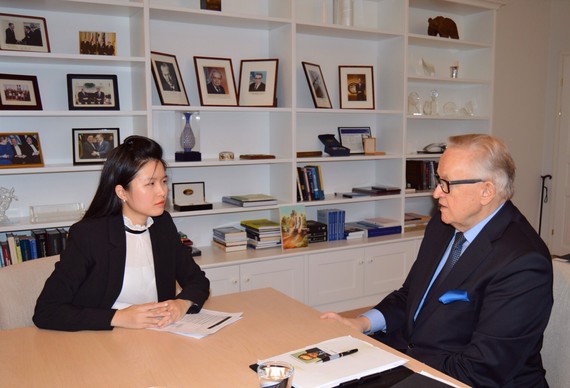 The Art of Negotiation I believe that an effective mediator can come from any walk of life. A mediator with a diverse background can be culturally different, but if he/she has a result oriented technique, and systematically thinks through the conflict resolution process then he/she can make a good mediator.

I don't think anyone can claim to be neutral, therefore I prefer to be an honest broker. People who approach me for mediation needs, therefore know that I am a man with integrity. For me, it is important that all the negotiating parties know who I am, what I stand for, and where I draw the red line. Moreover, I also think that it's important to have no dependencies in my life so that I can honestly and openly work with each party towards finding a solution to the conflict. As a mediator, you must know how and where to lead the conflict resolution or negotiation process. Sometimes you have to be very harsh on both parties, as you have to convince both the parties to adopt a solution if we want the process to go forward. You have to act like a good advisor for both parties, which is never easy. Moreover, in the negotiation process, you are invariably disliked by one, then the other and eventually by both the parties. This is because as a mediator you have to insist on the issues, not particularly liked by both the parties. However, it has been observed that with time both the parties realize that the mediator is right in insisting because otherwise, it won't be possible to reach a mutually acceptable solution for conflict resolution.

In 2005, when I was asked to lead the process that would clarify the status of Kosovo. I proposed immediately to constitute a Contact Group for following the events unfurling in Kosovo, in depth. The Contact Group consisted of representatives from the US, UK, France, Russia, Italy, and Germany. I proposed to have a meeting with them, during their London Visit in 2006. And all the representatives agreed well before that they would constitute the Contact Group members, and to ensure a fast and efficient resolution I personally corresponded through private messages to highlight main issues so that Serbia and Kosovo would know what I was planning to do. Subsequently, in the London meeting, I went through the key themes with the Contact Group members. After the meeting in London, the Russian foreign minister Sergei Lavrov traveled to Washington to meet with the Secretary of State Condoleezza Rice. However the situation had changed, Russia didn't want my plan to go through Security Council. Subsequently, after years of negotiations, Kosovo and Serbia declared independence in February 2008.

Success of the Negotiation Process When it comes to the success of the negotiation process, the main issues of a peace agreement must be specifically and properly addressed. It is also imperative that the signed agreement is implemented and therefore, the implementation process requires to be carried out by competent people. The parameters of truth and reconciliation are very important to achieve real peace and should be central to any negotiation process. Moreover, scaling up a process to reach national level takes time, and therefore in the interim reconciliation at the local level should be encouraged and thoroughly pursued.

Advice for Young People They should utilize all the possibilities that are given to them, and be open to opportunity. I also recommend learning as many languages as possible, because multiple language knowledge is an invaluable asset. For those interested in peace meditation, I would tell them to look up the case studies available online as they can be utilized to develop a better understanding of the process.