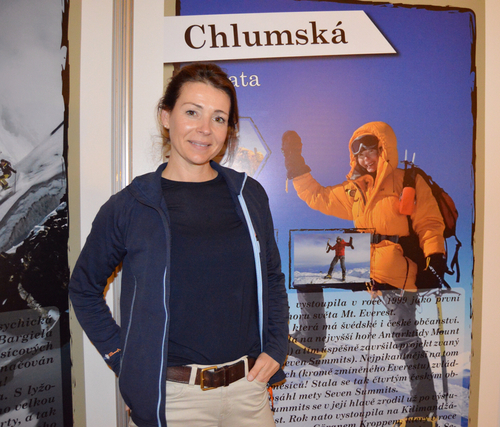 Renata Chlumska is a Swedish and Czech mountaineer, adventurer and motivational speaker. In 1999, Chlumska became the first Swedish and Czech woman to reach the summit of Mount Everest. In 2005, she performed a challenge called ''Around America Adventure''. She paddled a kayak from Seattle to San Diego, cycled with the kayak on a carriage from San Diego to Texas, continued kayaking around Florida to Maine, and then biked and kayaked back to Seattle. She became the first person to circumnavigate 32 states by bicycle and kayak in 439 days. The day on which she completed her journey, 15 September, has since been designated as "Renata Chlumska Day" in Seattle.

Chlumska successfully completed the Seven Summits in 2014. The sequence of her climbs was: Mount Everest (1999), Mount Kilimanjaro (2000), Mount McKinley/Mount Denali (2014), Carstensz Pyramid (2014), Mount Elbrus (2014), the Aconcagua (2014), Mount Vinson (2014). Chlumska rarely says no to new challenges. She is now preparing for her next adventure to the space. Lan Anh Vu sat down with Chlumska to hear more about her journey, the challenges she overcame and how she handles fear.

Why I Pursued a Career in Outdoor Adventure
As a young girl, I always enjoyed being outdoors. When I started school, the subject I was best in and the one I enjoyed the most was athletics. I figured I would do something connected with the outdoors for the rest of my life, so from very early in my life I've always pursued what I love.

When did I realize that this was my career? In 1995, I had the opportunity to travel with the Swedish expedition to Everest base camp. At the time, I had just started to climb, and I was a base camp manager. During a journey to Nepal and the Himalayas, I began to dream about climbing Mount Everest. After four years of preparation, I accomplished my goal and became the first Swedish and Czech woman to reach the summit.

Challenges
The mountain is symbolic in so many ways of having dreams, reaching difficult goals, struggling uphill, and facing conditions you have no control over. Most of the most difficult challenges I faced were personal challenges. With any expedition, I have chosen it myself: it's voluntary; nobody forces me to climb or to paddle. But in life, sometimes we face challenges that we don't get to choose: it can be losing your job, or losing someone that you love, as I lost my climbing partner. I had to face a life-shattering personal challenge, and it was impossible for me to be prepared for this tragedy. Suddenly you stand in front of an uphill climb and you fall into bits; you haven't trained for it and you aren't prepared for it. However, you have to find ways to overcome challenges.

What I Have Learned
I have learned the lesson that people are so much stronger and can come so much further than we sometimes believe. If we believe in ourselves, and if we use our heart and brain in a magic combination of brainware and hardware, then we can climb the steepest hills and the longest distance that we can imagine. We have it in us. We need to train ourselves and maximize our strength, and when we do that, there is nothing that can stop us.

When I have ideas or dreams, I step on the gas and go for them. I have learned that sometimes the obstacles that happen along the way can be frustrating, take time, and cost energy. There is a learning curve. Be realistic: new things will take longer time than you expect, and things usually don't follow you plan. Surround yourself with people who believe in you, help you, and give you that energy. 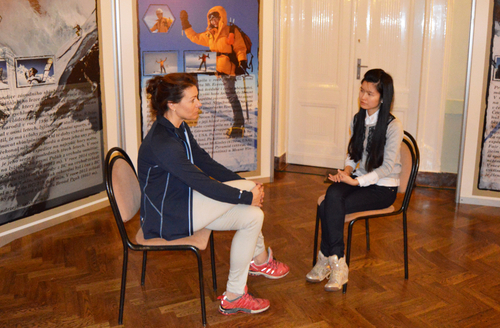 How I Deal with Fear
I have a special relationship with fear: I am not afraid of being afraid. I believe that fear is important. It's a defense; you need to get afraid of something, because if you want to survive, feeling fear is necessary. It's a warning signal that something is not good, or something is dangerous. If I wasn't scared, then, that would be a reason for me to get scared, because then I might do things that are out of my control and that I am not prepared or trained for.

I train a lot to minimize risks. Instead of trying to befriend fear, I learn how it feels, why I am scared, how can I overcome it, and what can I do in situations where I feel scared. So I believe in facing your fears instead of running away from them, but you should face them in a planned way, not just by the seat of your pants. Plan it, and if you do, you can go farther; if you run from your fears, then I believe you limit yourself. If you face them, then your boundaries will really make you dare to do more things. Not only physical fears should be faced; by facing mental fears, you can learn to accept things and think in new ways.

One of my biggest fears was public speaking. I decided at a certain point that I had two choices: I could either run or I could fight. If I ran, then I would run for the rest of my life, because there would always be a situation where I would have to present myself. If I faced the problem and took a certain amount of energy, I could fight the fear. You must never give in to fear, but acknowledge and overcome it.

My Preparation Process
The preparation process is a vital part of each new challenge. For me, it really starts with an idea. It might be a book that I read or somebody who I meet that gets me thinking, so it has to come from the heart. It has to come from within. Then I start looking at how long it would take, how much would it cost, what I need to learn, and who I need to call. Then I get the right equipment and teams together. Breaking the tasks down into smaller parts, building blocks.

For instance, in 2000, the idea was born that my climbing partner and I wanted to circumnavigate the coast of the US in 460 days. We decided to travel to Seattle to prepare for the expedition, but unfortunately, my partner was killed in a climbing accident. It then took me six years to plan and prepare for this expedition. I encountered planning difficulties such as visa problems and dealing with people. It was hard for people in immigration services to see that there are adventure athletes today who ski to the North Pole one year, climb Everest the next, and do something else the third year. That's your profession, not specializing in one thing. I was glad to finally set off and successfully accomplished the "Around America Adventure" expedition in 439 days.

My Definition of Success
I want to sit in a rocking chair when I am eighty five years old with all my grandchildren around me, telling them stories about this little girl named Renata who decided she wanted to travel the world and climbing, bicycle, and kayaking. She was able to meet many interesting people, discover different cultures, and learn new things. I've done and dared to do things and I won't feel bitter or old, but rather I will feel no regret that I've tried all of these things. If I manage to grow old with my kids and grandchildren and tell them about all the things I've done in my life, I will feel like a success.

My Advice for Aspiring Athletes
Look at what you would like to do and find if there is a community for it, then start training and practicing with people in the community. You will need sponsors to finance your project. Be realistic when it comes to how much funding you'll get. How did I get sponsors? It's about daring to make it happens and believing in what you do; if you believe, then you can persuade others. Otherwise, it will be difficult. What's more, you need to be able to invest in yourself. For instance, I didn't have a sponsor for a ticket to the space, so I took a bank loan to pay for the ticket. Once I had the ticket, then I could present the project to sponsors. And when they saw that I dared to invest in the project, that made them more willing to invest in it too. So I think you have to be prepared to invest your time, your energy, and everything else in your dream. I realized that there is no limit when it comes to dreams: if you aim for the moon, that's when you make to the stars.

This post is part of "How I Got There" series, which features people around the world speaking on their journey. What is the path to success? What challenges did people face and how did they overcome them? Lan Anh and her guests answer all these questions and much more. To view the entire series, visit here.