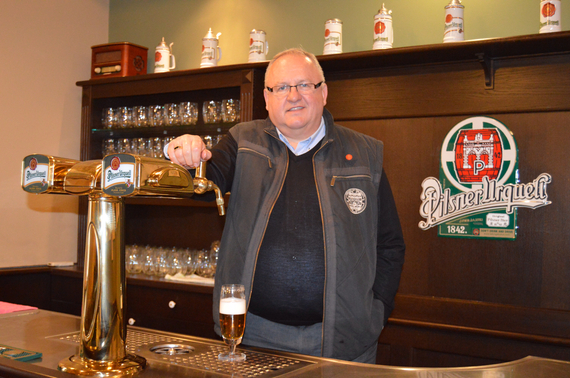 Vaclav Berka is the senior trade brewmaster and chairman of the supervisory board of Pilsner Urquell. One of the most famous beers in the world, Pilsner Urquell, is brewed in Pilsen in the Czech Republic. It is the world's first golden lager and has been brewed since 1842. Berka has spent more than 45 years working at Pilsner Urquell and oversees a parallel brewing process that ensures faithfulness to the way the original beer is preserved. Lan Anh Vu caught up with Berka to learn more about his journey as the current senior trade brewmaster, the challenges he faced, and how he maintains the quality and originality of Pilsner Urquell.

My Career as a Brewmaster
I visited this brewery from the time I was a little boy. During my studies of fermentation in high school and university, I spent all holidays here. My father worked for the company in 1945 in the fermentation department, and the third generation of Vaclav Berka was working in the malting plant. I was connected to the area and atmosphere of this brewery. My career decision was clear. My first working day was 14 July 1980, when I signed a contract with this company.

I brewed my first batch of Pilsner Urquell when I was 16. This was in 1971, and I helped a coworker in brew set number 1 and 2. My boss, Mr. Sykora, told me, "Try it and I will check you." That was the first time I ever brewed Pilsner Urquell beer. It was very funny. I felt very proud.

Challenges
My current challenge is to ensure and provide our consumers who drink Pilsner Urquell with the same experience as those in our brewery cellars in Pilsner. Pilsner Urquell has a high content of residual extract and hop substances; therefore, it is much more sensitive to poor handling than other beers. It is more easily damaged by poor storage at unsuitable conditions and for longer periods of time. In bottles, it is damaged by light and omnipresent oxygen, which accelerates changes in taste.

In 2005, we founded the trade brewmasters department. We created programs to achieve quality on the market. We check the entire process, from brewery gate to mug or glass, to be sure our consumers have the same experience as those in our brewery cellars. I train the people on our supply chain, our employees, people who transport the beer domestically or internationally, and people in pubs who manipulate and serve the beer. I also train people to properly clean the pipelines and glasses as well as how to serve the beer properly. We train people step-by-step in order to teach them how to maintain the quality and prolong the flavor stability.

Lessons Learned
Beer brewing is a process that is well described and precisely managed. A brewmaster has to learn from his predecessors. I had great teachers; my first teacher was my father. During my studies, I met many interesting people who had a very deep knowledge of brewing. They influenced and trained me, such as Mrs. Basarova, who is known as the Iron Lady of Czech brewery. She is over 80 years old, but she is still active in organizing and training people in university. I gained valuable knowledge and practical experience from many people.

When I started as a young trainee, I had the opportunity to travel across the West Bohemia and visited many small and big breweries. I obtained knowledge and gained enormous experience from brewmasters who worked at these breweries. 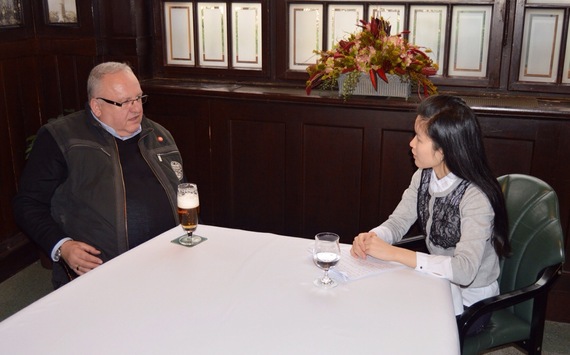 The Making of Original Pilsner Urquell
When I received training from my previous predecessors, they all told me, "Don't make changes in the recipe, the ingredients or the process. Be sure the taste of the beer is the same as before." This is very important, because this is how we reproduce the same Pilsner Urquell that was brewed in the 19th century.

To guarantee that the beer people drink today remains true to the original Pilsner Urquell, we have basic principles that we have used from the beginning and still currently use. These basic principles include our equipment. We use decoction kettles for boiling in the brewhouse and direct-flame heating for mashing. In the first year, heating was done with wood; later, it was with coals, and now we use natural gas. We utilize the decoction mashing process, which causes the sugars to caramelize; this leads to and creates a beautiful, burnished gold color and rich malt complexity.

Josef Groll, our first brewmaster, completed the first batch of brew on 5 October 1842. Five weeks later, on 11 November 1842, the first beer was drunk in the town. The period of time between 5 October and 11 November is approximately 35 days. We now have the same production time.

Pilsner water is very soft and distinctive in quality and it is desirable for making very pale beers. We use water from our own sources. Our sources are 100 meters deep; there is mainly sandstone and there is no mineral salt in the sandstone, so the water is very good when filtered. Great water is very important when making great beers because beer contains more than 90% water.

Since the beginning, we have produced all of our own malt in Pilsner using barley from the same Moravian farms that we've been working with for many years. It's important for us to be able to produce the malt to our exact standards so we can continue to brew Pilsner Urquell in the original way.

To achieve a truly rich and noble taste, we use Saaz hops, which originate from the Zatec region of the Czech Republic. Due to low levels of alpha acids (which provide bitterness to beer when boiled), it's great for aroma.

I have personally drunk this beer legally for 45 years, and I can say that the beer has the same taste. We still have a panel of old brewmasters and hold a meeting every two months to evaluate the beer. This is how we prolong the taste history. We are continuing a tradition that started with the establishment of the brewery in 1842.

My Advice for Aspiring Brewmasters
My advice for aspiring brewmasters is, first and foremost, that they should like beer. It is also necessary to obtain the knowledge and theories that come with practice. Learn how to brew and begin to reduce mistakes. For instance, if you use a higher temperature when brewing you could destroy everything, or if you use a lower temperature you will not achieve the proper products. I started as a trainee, and it took me 10 years to become a brewmaster.

The size of the brewery is not important. What is important is the quality. The quality depends on the people behind the beers. Brewmasters should not only add the ingredients to the beer--such as water, hops or malts--but must also instill their own soul into the beer and leave their imprint on it. This is the way to ensure quality. Don't be in hurry and don't forgo quality--this is the only way that you can be successful.