I'd finally done it. Eighteen months after my mastectomy, I got a tattoo to cover my scar. It transformed me from feeling like a victim to feeling victorious, a badass with a bright branch of cherry blossoms across her chest to protect her. Instead of being imperfect -- with a deflated chest and a divot (a reminder of the reconstructive surgery that failed) -- I was now a piece of living, breathing art.

One of my great joys had been making occasional pilgrimages to a Korean spa in College Point, Queens with a handful of close gal pals. One of my great sadnesses (besides being diagnosed with breast cancer and being afraid I was going to die, that is!) was the thought that I might never be able to handle being in a public bathhouse with dozens of other women who, unlike me, had two ta-tas.

But I felt more ready to cross that "spa" line since getting my tattoo. Weiling Gen "Pistol's" custom-drawn design, I transformed my scar tissue into a symbol of rebirth. With my permission, Gen posted my new tat on Guts'n Glory's Facebook page and I posted it on mine, as well as on Pinterest and "Why We Ink," a page devoted to memorial and survivor tattoos. The response was overwhelmingly positive. (But there is a big difference between baring my chest electronically and doing it in person.)

Since I'm a writer, I wrote about my experience in an essay. Traditional women's magazines all turned it down. One editor even wrote back with a curt: "It's not our style." Fuming, I wanted to tell her that one out of every eight of her readers would be diagnosed with breast cancer. Was that their style?

Eventually, Better After 50 was ballsy enough to publish my essay and post photos. Then, Ravishly reposted the piece. So did Share Cancer Support. Suddenly, my bosom (or lack thereof) was all over the Internet again. But I wasn't embarrassed or ashamed. Instead, I felt even more empowered. I hoped my candor helped others.

But still, my moment of truth was yet to come. Could I be naked with strangers? 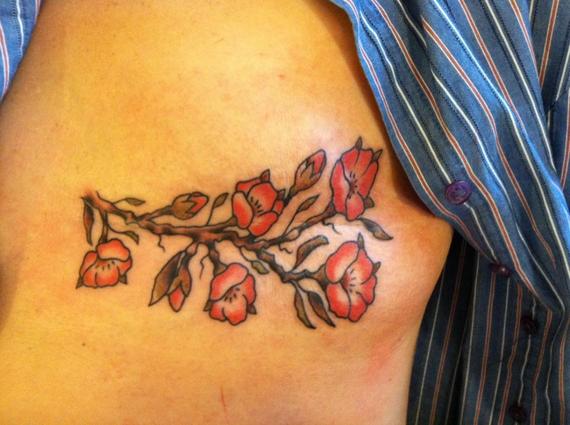 Knowing my trepidation, my friends Nadia and Eila invited me to join them when our mutual friend Liza decided to celebrate her birthday with a spa day. I felt incredibly comfortable with these three women. During my health odyssey, they'd been an undaunting support system: offering songs of healing and hope, coming by with Trader Joe "puckers" when chemotherapy made my mouth feel as dry as ash, lending an empathetic ear at the other end of the tunnel after chemo. I was ready to be naked with them. But with strangers? That was something else entirely.

On a bright fall day, Eila and I drove toward the Whitestone Bridge from our homes in Brooklyn. "I can't wait to see your tattoo," she told me, perhaps sensing my trepidation. After we'd parked, paid and stowed our shoes, we moved toward the spa's communal area where women of all shades and sizes were in various stages of undress.

As we unlocked our lockers with magic wrist bands linked to our credit cards, Eila asked gently, "Are you ready?" I fumbled with my lace bra, hoping my silicone form wouldn't fall out from the left cup. I wasn't exactly ready... yet I was.

I prepared myself for the first unveiling -- showing Eila my tattoo. Taking a deep breath, I unsnapped. Eila leaned in close. I could practically feel her warm breath on the side of my chest, the place where "Lefty" used to be. The place that was protected by a spray of persimmon-shaded flowers. "It's so beautiful," Eila said, her face softening into a grin. And I believed her.

Spa Castle has a strict no-towels policy in the indoor soaking area. In strongly-accented English, their booty guards made no bones about coercing ladies to drop their drapes if they tried to cover up. The same-sex hot tub section was a bathing-suit-free zone. Even the flimsy hand towels they offered left little protection. It was clits all and tits (or, in my case, tit) as far as the eye could see.

Eila and I padded barefoot toward the spa pools. Before immersing ourselves, we rinsed off in adjoining showers that sprung from the black-tiled walls. Due to the extreme heat, I left my glasses behind in the locker because the lenses would be perpetually fogged. This was a blessing in disguise, because if anyone stared at me, my near-sighted self wouldn't be able to tell. So far, so good.

After a quick scrub, Eila and I chose one of the pools in the medium temperature range from the four different heated mineral soaks. Still sans spectacles, I managed to decipher Nadia by her walk. Liza, the birthday girl, was just behind her. All three of my angels of support were finally here. Circling me, they oohed and aahed over the bouquet tattooed across my chest.

I had managed to be naked with strangers and lived to tell the tale.

In the end, no one stared. Well, no more than women usually stare at each other. Especially naked women: comparing and contrasting, and hopefully concluding, like I did, that we're all quite lovely and all so very different. Large-bodied, with pendulous breasts; slender with teacup titties; with nipples big as saucers or pointed like fingertips; mounds that sit way up firm and high or low slung like a string of pearls. Or breast cancer survivors with just one.

We're all beautiful miracles, every last one of us. But especially me.

This story by Catherine Gigante-Brown first appeared on Ravishly.com, an alternative news+culture website for women.

In The Wake Of My Mastectomy, I Got A Tattoo

4 Downsides Of Weight Loss Nobody Ever Tells You About

Confession: I Went On A First Date With A Bigoted Homophobe


18 Books Every Young Woman Should Read