Welcome back, folks! After a brief winter break, "How I Met Your Mother" is back for its final episodes.

In December co-creator Carter Bays announced that the show would end on March 31, which makes these last few episodes the show's elongated swan song.

We've made it through the mad dash of flashbacks, flash forwards, awkward meet-cutes at the Farhampton Inn, a particularly lovely rehearsal dinner episode and some unwanted elderly sex. We've gotten all the way to the second-to-last slap, which in "HIMYM" folklore is a BIG. DEAL. In last night's episode, "Slapsgiving 3: Slappointment in Slapmara," Marshall doles out an epic slap prompted by his seven year slap bet with Barney. "HIMYM" experts will remember each Slapsgiving fondly, from the countdown slap clock to Lily's dad's board game Slap Bet. This episode veered from the usually sentimental slapisode ways and into unchartered territory.

The seventh slap came in the final few moments of the episode, after a l-o-n-g story about how Marshall spent a year in Shanghai (no, he didn't really spend a year in Shanghai) learning the art of the slap of a million exploding suns. In a flashback, Marshall tells Barney of his year in Shanghai (still not really Shanghai) under the teachings of three slap experts -- obviously played by Robin, Lily and Ted. 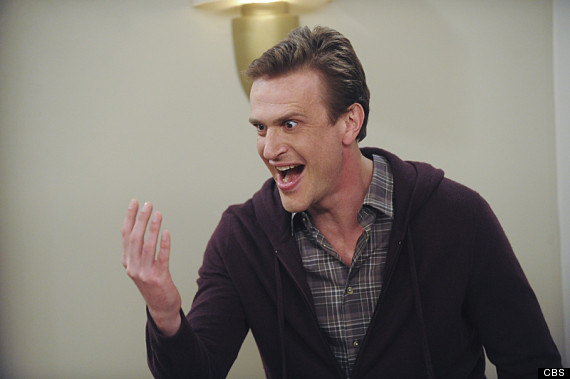 Marshall puts the fear of God in Barney after he "slaps" a jukebox and it collapses. But, we must take a moment to discuss how delightfully awful said special effects were in this scene and in the scene in which Marshall literally slaps the heart out of a man (fake Ted). Great guffaw moments all around.

In the woods behind the Farhampton Inn, Marshall slaps Barney. It's a hearty one, they all agree, accurate and firm. Well played, Marshall, master of slaps. He's got one more left.

Oh yeah, and BOYZ II MEN WAS THERE. I repeat: BOYZ II MEN came out of the woods near the Farhampton Inn and sang "You Just Got Slapped." This actually happened and the whole gang pretended to be backup dancers.

When do you think the final slap will happen? Did "Slapsgiving 3" live up to all your slap-xpectations?