"Last Forever" confirmed our worst fears. The hour-long "How I Met Your Mother" series finale proved the conspiracy theorists right. The mother, whose name we found out was Tracy McConnell, was dead at the end of the episode. By the time Ted told his children the story, she had been dead for six years, victim of a "sickness," during which Ted loved her very, very much.

It was a moment fans saw coming, but the nail in the mother's coffin (sorry, I had to) came after Ted revealed she died. In the final moments, Ted's kids convinced him to call Robin to ask her on a date. It's been six years, they said. It's okay to move on from Mom. Seriously. He then showed up outside her apartment with that blue French horn. About halfway through the finale, folks on Twitter started to notice the hints: Robin and Barney got divorced (we'll come back to this), Robin had a too-cute run-in with Ted and his daughter on the street and she told Lily that Ted was the guy she should have married. It fit together. It was the best, but also very much the worst.

Backing up a bit, the finale raced through the years between Barney and Robin's wedding and present day. Within the first 15 minutes, we found out Barney and Robin got divorced three years after their wedding. Her career as a news anchor took off quickly and she began jet-setting around the world. Barney's blog suffered. They got drunk in Argentina, had a lot of sex, got sober and decided to split up. Robin slowly, and unconsciously, was pushed out of "the gang."

Barney went back to his old ways. There was a Playbook II, which involved "The Mannequin" and "The Jim Nacho." He then embarked on a perfect month, banging 31 girls in 31 days, until number 31 got pregnant and had baby girl Ellie. In a moving scene, Barney said to the baby, "You are the love of my life. Everything I have and everything I am is yours forever."

Lily became pregnant with their third child and she and Marshall finally decided to leave the old apartment. In an epic Halloween/ Goodbye Apartment party, she dressed up as a white latex whale and had one of the most dramatic scenes of the episodes in said outfit. (Major ups to Alyson Hannigan for this one.) At the party, Robin showed up, but clearly hadn't seen the gang in months, if not years. She left in a fit, after seeing everyone together, and broke down "the gang" for Lily. "It's just never going to be how it was," she said. "It can't be. It doesn't have to be a sad thing." And that's true of all relationships. 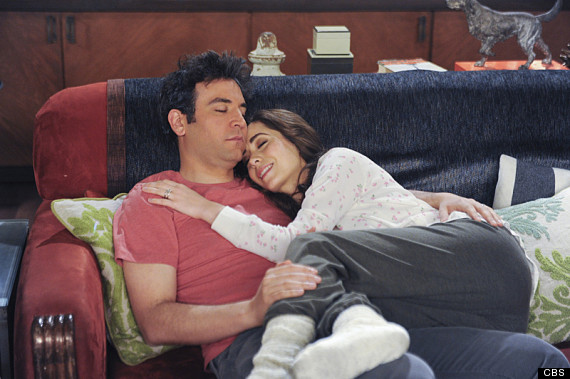 Ted and Tracy waited seven years to get married. There was no rush because an extraordinary, happy life just got in the way. Marriage had been the ultimate goal for Ted all along: Meet the right woman, get married, have kids. Switching up the order, but portraying a committed, loving relationship without the ring right away, rocked. It showed Ted's growth and proved their love wasn't centered around a wedding (though a French castle could have been nice), or one single moment. Instead it was based on millions of little moments, and a life they created with one another.

As series finales go, this one will probably go down as one of the heartbreakers. They killed the mother! I repeat, they killed the mother! After the finale aired, I stopped by a friend's going-away party and left soon after arriving, explaining that I had to finish recapping a very confusing hour of television. When someone asked how the show ended, admitting they hadn't seen an episode in years, I said, "The mother dies." Everyone burst out laughing, as if I had been the victim of a bad joke. My guess is because that's not how "HIMYM" was supposed to end, according to the first few seasons. "That's so f*cked up!" my roommate -- who also hadn't watched the show in years -- yelled at our TV when she saw Cristin Milioti lying in the hospital bed.

But life is cruel, as it has always been to Ted, and Tracy McConnell died.

It wasn't the happy ending we thought we were promised when Carter Bays and Craig Thomas set out to tell the story of how Ted Mosby met his children's mother. To viewers, it was supposed to be a story about finding your one true love in a messy, mysterious city, filled with best burgers and stripper versions of yourself. But instead, it was a story they wanted to tell, one we never see on TV. The whole nine seasons became one long tale about moving on from loss, accepting growth in pain, the reality of friends drifting apart and the negation of "one true loves." Ted didn't have one true love. He had two, maybe more. May we all be so lucky.

But, they never solved the pineapple incident. Just saying.

Some Stray Thoughts ...
Go To Homepage

"How I Met Your Mother" Series Finale