Paging through the red leather diary for the first time gave me goosebumps. Little flakes of red leather from the diary's worn cover sprinkled onto my white bedspread. Every page and entry was magical. I couldn't help but thinking, how did it find its way to me, and why?

Florence's life was one of theater and art, many lovers, writers and poets, including the Italian Count Florence fell for while in Rome when she sailed to Europe in 1936. Names floated on the pages through time: Eva Le Gallienne... George... Nat... Manny... Pearl... Evelyn...

That first night with the diary when I was 22, in 2003, I slipped under the covers and continued to read. I followed Florence's adventures into the night. My lavender-painted room, which I was renting in the Upper West Side apartment of an eccentric older woman, filled with an orange glow from the streetlamp outside my window. Time seemed to do a backbend, like in yoga.

I felt as if we were one, this girl from the'30s and I. Florence wrote on July 3, 1932: Five hours of tennis and glorious happiness--All I want -- is someone to love -- I feel incomplete.

I got out of bed to examine the other items I had found in the steamer trunks in the dumpster alongside the diary, the rose beaded flapper dress, which hung from its wooden trunk hanger like a pale pink ghost. I wrapped myself in the musty glamour of the tangerine bouclé coat with the label sewn into its silk lining, the color of the pearly inside of a shell: "Bergdorf Goodman on the Plaza." I secured its elegant Bakelite button.

I slipped into the flapper dress and quietly danced around my room until beads from its frail fringe started hailing down onto wooden floorboards. I eyed the black satin bathing costume for an hourglass figure. Its straps crisscrossed my back like X-marks-the-spot.

As I stared into my full-length closet mirror, the old kind in two separating layers dotted with black spots like a jumpy old film reel, I couldn't help but wonder: Who was this young woman? Who was Florence Wolfson? Who was I?

As I walked around New York, Florence's diary became my guide. Trying on a dress at Bergdorf's, I caught myself searching my reflection, waiting for Florence to join me. Considering a lipstick at Barney's, I noticed the Nars lipstick, "Flora" between "Orgasm" and "Pillow Talk."

I stopped at La Perla to pass the time before meeting a friend, an actress, and thought of Florence amid lace as light as sea foam, embroideries made by fairy hands. I flipped through color swatches and lost myself in its underworld. The Roaring Twenties. Jazz. The Charleston. Coco Chanel. Garter belts. The'30s evoked Marlene Dietrich. The seducing Blue Angel in corset, stockings and top hat. Just what the dismal times needed.

Florence's words floated down through the city's canyons, and into my mind. Only a few favorite places survived from her New York. One was the Metropolitan Museum of Art, where I often sought rest in the Chinese Garden Court. From the rooftop sculpture garden, I stared at the dreamlike citadel of Manhattan's rooftops. New York is the place of stories, allegory, and metaphor. Like Alice in Wonderland and Dorothy on the road to Oz, Florence was determined to make her way. I discovered the diary, a real-life time machine, which transported me back into Florence's world. Florence once wrote, on the beach, away from her city, Oh, for dear old New York!

Fearlessly and authentically, Florence Wolfson filled the diary's pages, recording her life's adventures over five years, from 1929 to 1934 from 14 to until she turned 19. I learned from a newspaper scrap, which fell out of the diary's pages that Florence had lived on the Upper East Side.

Three years later, I found Florence, miraculously, after receiving a chance call from a private eye. Charles Eric Gordon was like a pulp 1930s character who entered my life wearing a trench coat, pulling a magnifying glass out of his inside lapel. His license plate read "Sleuth3."

Florence, I learned when I finally met her at 90 and reunited her with her red leather diary, was one of a generation of Depression-stamped young men and women who longed to cultivate a creative life. As a 19-year-old Columbia graduate student, Florence hosted a literary salon in her parents' apartment. Among her friends were the young poets, Delmore Schwartz and John Berryman.

Scalloped-edged black and white photographs recreated the half-forgotten world of the sophisticated young Manhattanite who loved "making a sensation" outfitted in clothes designed by her mother, a couture dressmaker with a shop on Madison Avenue, who had come to America alone as a teenager and worked her way up to being a respected business owner, a rare accomplishment in those days. 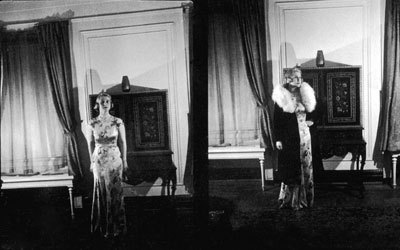 The diarist posing in her mother's designs.

After Florence married, she drifted from her art and admitted she had, later in life, "a country club mentality." As she fingered the pages of the red leather-bound book crumbling in her hands, she reflected on the young woman brought to life so vividly in its pages.

The diary proved how buttoned up our version of the past tends to be. Long before blue jeans entered the scene, the Beatles, Rolling Stones, Woodstock--love was in the air. A sexual revolution was taking place in Florence's 1930s world. If Florence had been born fifty years later, she would have fit right in.

As open as Florence was in her diary, she was with me. That's Florence, a timeless teenager. As I write, she is headed north from her home in Pompano Beach to embark on the book tour. The Red Leather Diary hits bookstores on April 8. Her email from earlier in the day reads:

We're leaving soon--am trying to be calm--but who expected all this at my age? Lv 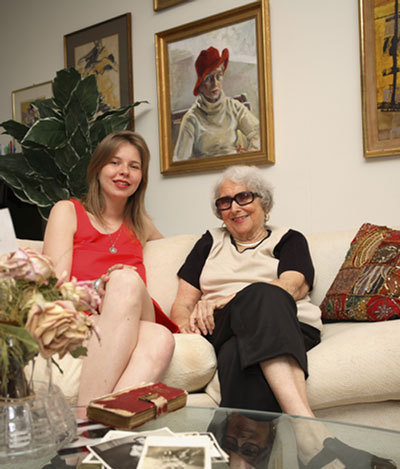