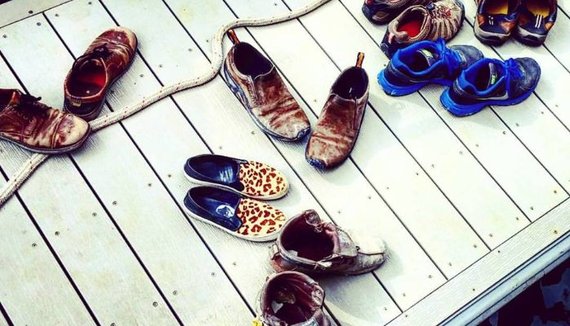 Last November I got fired from my dream job. It happened without warning, about half an hour before the end of the work day.

That morning I had my first "real" boat-building accident. I was trying to grind down a screw. I needed said screw to sit flush with the face of a hinge, so I could attach it to a lid, which would cover a cooler, in the galley of a three million dollar luxury yacht. We didn't have any screws that were quite short enough so I used the disc grinder to take some length off of our shortest screw. The plan worked flawlessly.

But then I needed to grind it down a little more. I concluded that the safest way to go about this would be to put the screw in the hinge and hold onto that, thus protecting my fingers from getting too close to the disc. This ended up backfiring because the hinge got caught and pulled into the machine, along with my right hand. 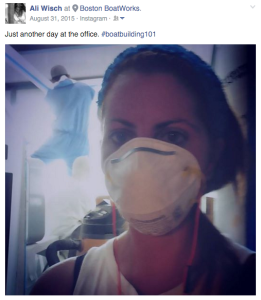 Luckily, I reacted instantly and pulled my hand away. I knew the outcome could be dire. I'd met enough people in boat building with fingers that had fallen prey to various machinery. So I forced myself to look down, just to make sure my finger was still there, and it was. Fortunately the only tangible loss was half of a fingernail and a little bit of skin- all which grew back. The intangible loss was my self-confidence and what I assumed to be some respect from my co-workers.

After the accident I really wanted to go home, but I also really wanted to prove myself. If I worked the rest of the day then maybe they would start to see how hard I was trying. I knew that I wasn't as good as everyone else- far from it. But I wanted to be. Plus, I was a beginner and they knew that. So I pressed on, all the while unaware that in a few hours my boss would ask me if I wanted to talk about "how things were going." I knew that this conversation was coming at some point but I didn't know that it wouldn't, in fact, be a conversation but rather a meeting with my boss, my boss' boss, and the nice lady from HR.

On the elevator ride from the shop floor to the nice offices above my boss tried to make small talk with me. He asked how life aboard was going. I was surprised by his friendly demeanor. Lately I was lucky if he would say hi to me in the morning. I was so caught off guard by the randomness of his question, given the state of our interactions, that I had trouble coming up with a response.

As soon as we walked into the room I knew what was happening. They even had the forethought to put a tissue box on the conference room table.

Meanwhile, I had prepared myself for the conversation I never got to have. My armor, a crumpled copy of my review shoved into my pocket and a handwritten list of ways in which I'd met, if not exceeded, their expectations. But like I said, they didn't bring me in to have a conversation.

So, I sat there while they explained to me why I wasn't a good fit. While they suggested I think about going to boat building school or perhaps, making a career change all together. They made sure to mention that I probably saw this coming and as a token of their appreciation they would allow me to come back to clean my locker out later- so that I wouldn't have to do it in front of my soon to be ex-coworkers. I think the only words I said were thank you. And then I left.

The walk home was only ten minutes long. In fact I had moved earlier that month to be closer to my dream job. I waited until my hands were steady enough to dial my boyfriend. I knew that telling someone else was the first real acknowledgement of what had happened and I didn't want that, but he would be a good person to tell. He responded appropriately, I think. To say that he was angry at them would be an understatement. I, on the other hand was still in a state of shock. Once that subsided I was overcome by an avalanche of fear.

Unable to comprehend bigger questions like what this meant for my future, my relationship, my mental health; I was more concerned with what everyone else would think.

I knew that having to tell people about my failure one by one, with the holidays just around the corner, wouldn't be easy. The shame was overwhelming and the distress, paralyzing. The first idea that came to mind was to cancel all of my holiday plans and hide on my boat for as long as possible until I could secretly sail away and pretend like my whole life had never happened.

Instead, I was in the shower later that night when a thought struck me. Ironically, in an attempt to keep my bandage dry I had my injured half of a finger sticking up in the air like I had just come up with something brilliant, when in fact, I had. I was thinking about a social media post that I made when I got the job.

I received overwhelming support from my friends and family. And while my gut, or my ego maybe, was telling me to hide away for ever, another part was telling me that I needed that support again.

So instead of running away I made another social media post, this time, about my really crappy, horrible, super-bad, day. And it was the best decision I could of made. I no longer had to worry about who knew, who didn't know, or how I would explain it. The cat was out of the bag. By taking control in this way I had an opportunity to view it from an objective standpoint and communicate about it in an honest way that yes, had a downside, but also had an upside.

In the end, it was horrible and beautiful, raw and relatable, but most importantly it was my story to tell. The support that I received after speaking openly about my failure was remarkable. And, I think, it's how I survived.