I came late to motherhood, as I came late to most things, like blooming and general adulthood. You think I'm kidding, but seriously, the craziness of my early 20s went on and on until I essentially spent 20 years being 20, and now that I'm 40, I'm doing what 20-somethings are supposed to do (chasing two preschoolers around).

Not that I have regrets! Well, maybe that one thing. But you can't tell it's me from the camera angle! Anyway, I mostly don't have regrets because all this experience has got to help me be a more effective parent.

I spent a few years as a standup comic, but since my parents are still married, I never really took to it. That's the rule: if your parents are married, but you're funny, you do improv. And indeed, that's where my comedy heart lies. I'm an improv dork.

Improv is kind of like the Borg, if you do it right. The golden state of improvisational comedy is this elusive, nirvanic state called "group mind." When your group is really cooking, it's as if you are all wearing short-wave headphones into which God himself is whispering your cues. You'll never think alone. It's a codependent's dream, an introvert's nightmare.

So I spent years "grouping around" in New York and finally landed on the improv cube-ship, Upright Citizens Brigade Theater, where I took class after class and lingered, constantly, joyfully, as Amy Poehler and Horatio Sanz and Bobby Moynihan came and went. Where did it get me? Not to SNL, boo hoo. But it made me happy and I'm pretty sure imparted skills that -- whaddaya know? -- really come in handy for parenting. 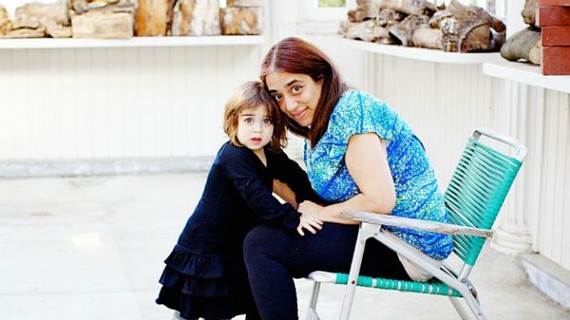 "Yes, And." The most basic tenet of improv is never to deny the reality of the scene, never to say "no" to a suggestion. You say "yes" and see where it takes you. Obviously I can't say "Yes, and a cherry on top!" to, "Can we have ice cream for lunch?", but when my kids start the day by saying, "Can we have a picnic?", "Can I be a doggy today?", "Can I wear my pajamas under my clothes?" ... within reason, my policy is "just go with it," and save those no's for when I really need them. Because you only get a certain number of nos*.

"If this, then what?" A deepening of "yes-and," "ITTW" is the thing you ask yourself as you go through a scene to help you heighten (the stakes, the humor, the improvviness of it all). It keeps things moving. Now: When your kid DOES ask for ice cream for lunch, you can annoyingly take them through, "If you have ice cream for lunch... then what will happen?" It's a live version of, "If You Give a Mouse a Cookie" and it is very distracting. SQUIRREL!

Don't ask questions. Make statements. In a scene, this means you don't waste time dithering like a couple deciding on dinner after seven months of dating ("I dunno, whaddayou want? I dunno, whaddaYOU want?"). Instead of saying, "Is that a wolf howling?" you say, "That howling wolf can mean only one thing!" With kids, this means you say, "Here's your pink stripey dress!" and let them object if they must, rather than standing there with two dresses while the kid stares blankly into the middle distance, slowly twisting her fuchsia pipe cleaner into the shape of a mother's dying soul.

Find the game. This refers to finding the underlying pattern of a scene, the thing you're building on together, and you should be able to do it lighting-fast and imperceptibly. If the scene is the dead parrot sketch, the game is one-upping the explanation of what "dead" means. Boom. For kids, this is all about playful parenting. My daughter came running in, crying about something her sister was doing. "She is playing a game that is fffffff!" she yelled, so angry she temporarily lost the power to speak. "A game that is FFFFF?" I yelled back. "Not FFFFFFF! I'm going to go FFFFFFF her right out of her FFFFFFFF!" And thus we pivoted away from the hurt feelings. HIGH FIVE, SELF. *smak*

*This might not be true. But OMG, what if it is? 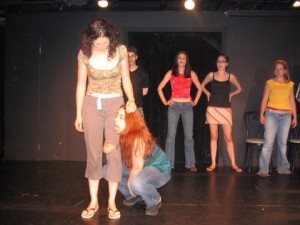 Go with it. In improv, there are no mistakes. There are no do-overs. There are no regrets. In motherhood, even more so, especially when your kids learn to count the number of months between your anniversary and their birthday. Ya dig? No pouting, not for mom, not for kids, not for improvisors.

Be in the moment. In an improv scene, you never want to sit around waiting, or planning, or discussing something that is going to happen. That's wasted time. Every scene takes place the day this new thing happens! This is highly valuable for anyone who has been dragged down a five-year-old's rabbit hole of "...at my next birthday party, I'm gonna...." Being in the moment short-circuits your lingering work angst and inspires you to yell, "Today IS your birthday!" and print out a bunch of cupcake toppers just for the heck of it.

Have an activity. If you want to write a sketch that makes fun of improvisers doing improvisey things, you can have one of them pretending to dribble a basketball and the other pretending to stir pancake batter. That's how ingrained it is into us from day one -- not to be talking heads, always to engage our bodies. I cannot stress enough how valuable this is when you're dealing with kids. Never mind that researchers have found that for certain overstimulated kids, inversion (turning them upside down) can short-circuit a tantrum. Getting up from your desk, from their couch, from the lawn chairs, from anywhere and running dorkily around the yard is sometimes all a body needs.

Raise the stakes. Whatever you do in a scene, it must be the most important thing in the world. Even if you're bored: Be the MOST bored people in the world. But you know what? This is the one thing that doesn't help. Because holy crap -- this isn't a scene in a basement theater in Chelsea. It's actual humans. The stakes are already so freakin' high I might never have done it in the first place if my biological clock hadn't been clanging so loud, I couldn't hear myself think.

Still. It's good that all that training could come in handy, right? Plus, I feel totally justified in bursting into the kids' room at dawn and yelling, "LIVE from SAN FRANCISCO... it's SATURDAY MORNING!"


PHOTOS: All used with courtesy of Amy Keyishian

How 'Orange is the New Black' Stole My Daughter's Innocence
10 Health Mistakes Busy Moms Make
Every Day is a Chance to Screw Up My Kid Less
Opposites Detract: When You and Your Partner's Parenting Styles Don't Mesh