For years now (and especially because of Millennials), people have been carefully scrutinizing what they eat. It's become fanatical.

Whether it's health-related concerns or pure vanity, the search for knowledge about what's in our foods and eliminating certain ingredients or foods altogether has completely overtaken society.

We've had the Atkins, Ornish, Paleo, Vegan, Fertility, Mediterranean, Flexitarian, Biggest Loser, Weight Watchers, Jenny Craig and Mayo Clinic diets. Do any of these certifiably, consistently work on everyone?

Then, there's also the food restrictions. I once dated a woman who had to eat Gluten-free, was peanut-allergic, Lactose-intolerant and strictly Vegetarian. Going out to dinner became no fun. So there are people who for medical reasons cannot eat certain substances.

As we reduce the base number of things we can eat, new discoveries, processing innovation and small business become more important to move humanity forward. Not only first-world humanity ... but also crucially, third-world billions who will literally eat anything without regard to what's in it because of their extreme hunger. 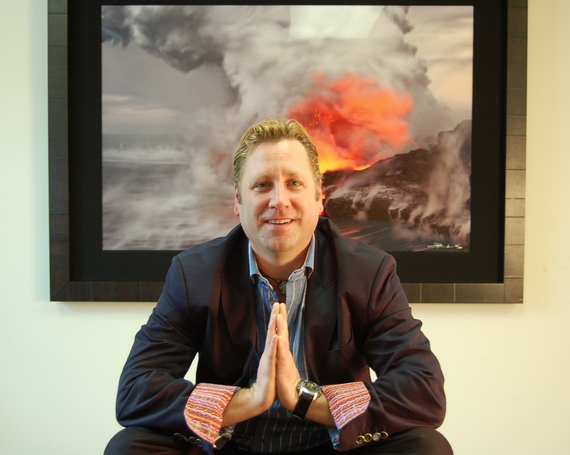 He never thought he'd be in the food business. Supremely well-educated with B.S., JD/MBA and L.L.M. degrees, Janow doesn't come off as an egghead. Quite the opposite, he's down-to-Earth, well-grounded and an engaging conversationalist.

Janow was initially in medical school and wanted to become a doctor, for a while. Rapidly pivoting to four years as an attorney for the giant Cadwalader, Wickersham & Taft, then to an IT/M&A firm and finally an MBO group, Janow was restless.

"Dad told me, 'Pick a job,'" Janow told me laughing. "My father-in-law owned several pet stores in Calabasas, California and in 2002 was developing an animal feed with rice protein." Janow then discovered a way to take the feed from 55% to 65% rice protein.

"I knew that my father-in-law was simply selling this product in his stores; that it was being made elsewhere in a factory," Janow recalled fatefully, "I looked at the back of the bag and saw that the ingredients were made in this country and likely were too expensive." So Janow began to source new overseas providers of the ingredients ... and think.

"Our customers were using so much of it," Janow told me excitedly, "and they were saying it was so good for the animals, I thought, 'maybe it's good for people.'"

This is a real 'Moment of Truth' for any entrepreneur ... the germination of a business opportunity.

Some recognize a moment such as this. Others lose it to the ages, oblivious.

"There's not enough protein in the world; it's why people are starving," Janow said mournfully. It would be this problem that Janow worked to solve.

In 2004, Janow attended his 15th high school reunion and this precipitated a move to Los Angeles. "I was living in LA working with my parents," Janow recalled, "then my son was born premature and my mother fired me."

Looking back now, Janow is glad his Mom let him go. Without this difficulty, Janow may not have started Axiom Foods in January, 2005 in Santa Monica.

Now, Axiom Foods has more than 40 full-time employees, over $52 million in annual revenues and a bright future.

But how did Janow and Axiom Foods get there? It wasn't easy.

Apparently, there's a much healthier core inside your average piece of rice. This is what Janow discovered at the suggestion of the aforementioned big customers Old Mother Hubbard and Nestle Purina: brown rice protein is healthier and safer for living creatures, including humans. Janow then extended his newfound ingredient into a product for human consumption. This was the key innovative activity.

But Janow and his company were struggling.

In early 2005, Janow and the nascent Axiom had some hurdles to clear. There was taking his rice protein product from 'feed grade' to 'food grade' and the human consumption market. There was the bureaucracy, expense and pain of getting a Certificate of Analysis (2009) and FDA approval (2010); no easy tasks which have undermined and completely derailed many small enterprises with great potential.

A fateful and fortunate coincidence of timing for Janow occurred in 2007-2008: the entire global pet food industry went into chaos mode. Melamine, an ingredient not approved by the FDA but in widespread use in China, was killing dogs and cats around the world. This organic additive is also related to a pesticide, cyromazine. An immediate FDA pet food recall was followed up closely with reports of humans, mainly children in China becoming sick through milk with Melamine added.

Janow then knew, and knew completely that his rice-protein alternative for humans was the best and only way to go. With rice protein the ideal alternative to Melamine, Janow and Axiom went almost overnight from near-bankruptcy to a high-potential revenue enterprise. 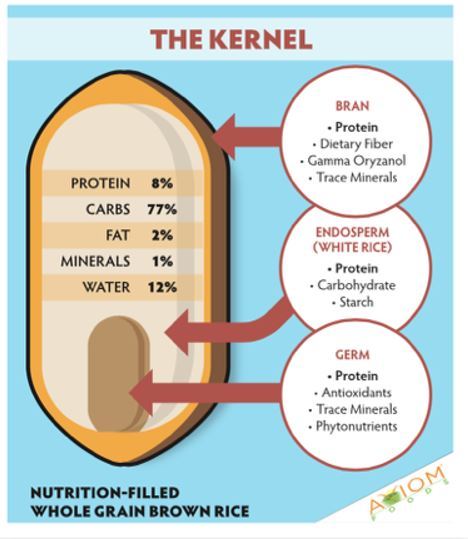 The diagram above shows that it is Janow's process of getting to the Germ or the rice kernel and to a smaller ingredient, the endosperm of the kernel which provide the 'oomph' of Janow's "Growing Naturals" Oryzatein® brown rice powder protein mix.

And rice protein has it all over animal protein. 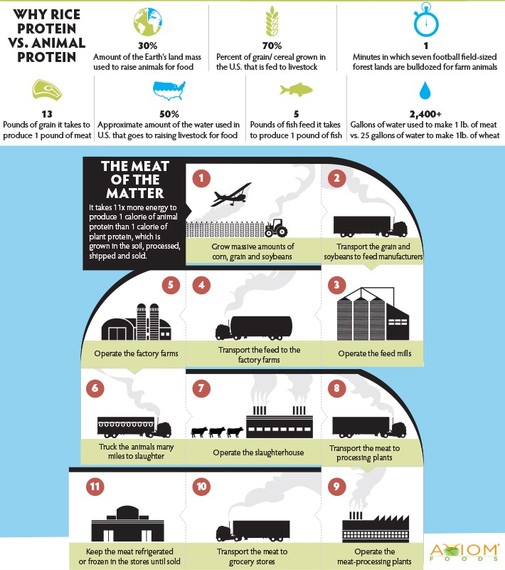 As the chart above clearly shows, the supply-chain for meat is perverted by too many steps. It's too costly, too convoluted and too rife with "pound of flesh" middlemen. There's got to be a better way to generate healthy, nutritious food. 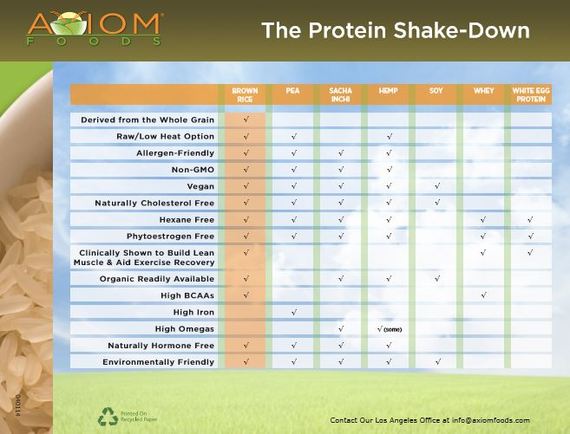 I've often heard how unhealthy white anything--bread, flour, rice, sugar, etc.--are for us. It never really had me hesitating, though. Turns out, white rice is particularly devoid of health benefits. 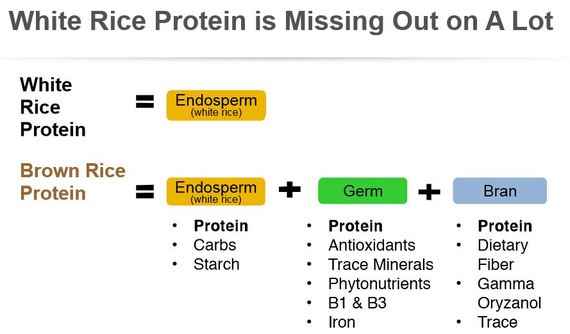 I'd never known precisely how important protein is to the human body. 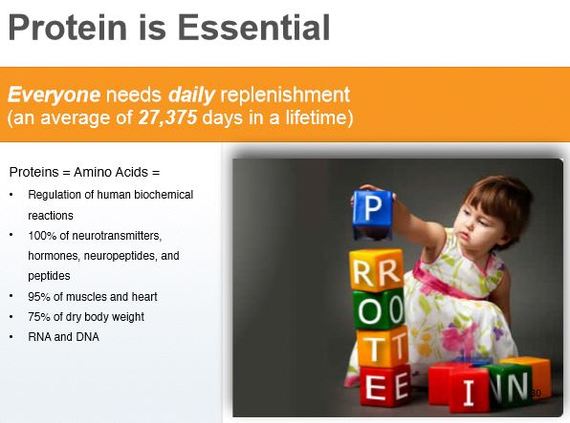 Creating a new brand; their own powder base for healthful drinks, "Growing Naturals," Axiom Foods has become the leading supplier of rice protein, and increasingly, pea protein to other health-food manufacturers. This has proved an excellent two-pronged, sales strategy for Janow and Axiom. 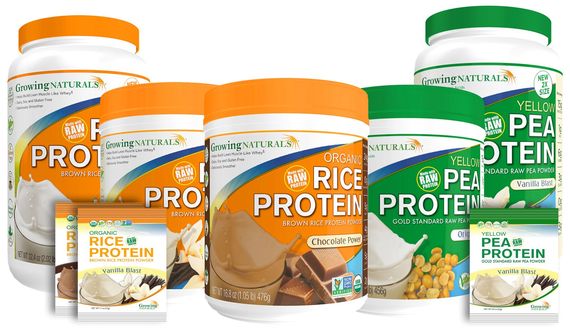 Axiom's proprietary rice and pea protein ingredients are inside numerous products available at healthy retail giants like GNC and Vitamin Shoppe, as is their own product pictured above.

For me, these powders have always seemed to taste funny, a bit like milk of magnesia. Janow's don't.

Piggybacking on the phenomenal success of powdered, Whey-based, shake mixes like METRx, Janow seems to have timed his patented entry into this segment perfectly. An alternative was required. 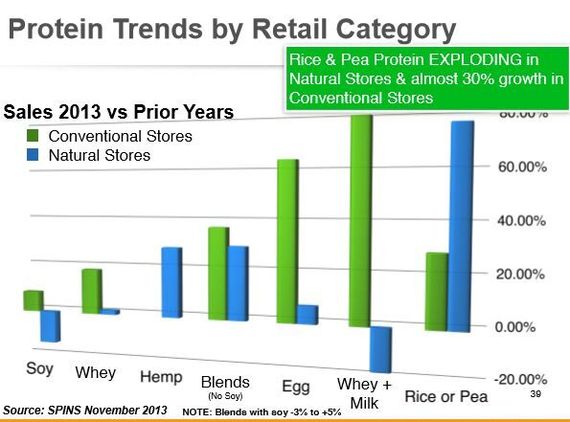 Janow and Axiom are blessed that their business is "growing triple digits since 2009." This would be partly because of the soaring retail numbers and consumer demand in the graphic above ... BUT also, because David Janow created, innovated something completely new in the food world that was purposely healthy.

Added to this strong growth is an announcement this month by the FDA that they have approved Janow and Axiom Foods for a GRAS (Generally Recognized as Safe) classification for both its clinically-studied Oryzatein®, brown rice protein ingredient and their Vegotein, pea protein.

Janow projects 2016 revenue of $85 to 95 million; he's built and scaled Axiom Foods in all the right ways. "We're profitable and completely self-funded," Janow said proudly. "In five to 10 years," Janow further predicted, "I will have five to seven more factories built and running at $200 million in revenue each year."

I guess we'll all have to continue our close scrutiny of labels in order to ensure we get the healthy products we're seeking and our money's worth.

The process of innovation however, continues to fuel progress for humanity. It's people like Janow that are the igniters of all forward movement. Without somebody wondering, "Is there a better way?" we'd still be starting fires with two sticks.

Janow's early worries that there's not enough protein in the world are the reason for his mission. "I want to be able to change the world," he told me altruistically, "when I'm gone, I want people to say there goes the 'plant billionaire.'" Not a bad way to be remembered.