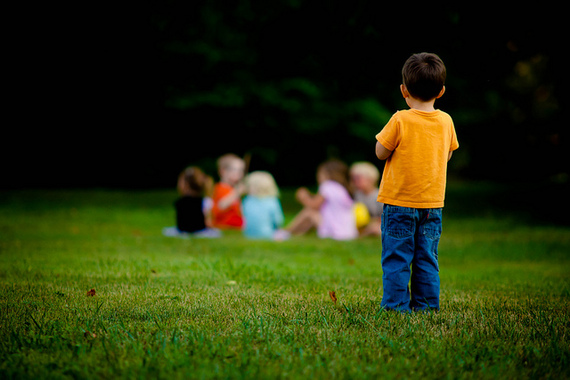 This article is for non-Muslims and Muslims alike; for non-Muslims that are curious to know how the cousins of such an atrocious act are feeling, and for those Muslims needing to put these deep, painful, and confusing emotions into words.

It's hard to see history being made when you're in it, but know that you are in it. The attacks in Paris on Friday the 13th of November, 2015 will be known as the first attack by ISIS on Western soil; and the December 2nd San Bernardino attack marking the first on American soil. Both of these tragedies have evoked a variety of powerful emotions for many in the Western world. For Muslims of the West, however, there is a unique combination of emotions squeezing the pit of every stomach.

It's a combination of feelings that ranges somewhere from fear and rejection, to nausea and dejection. And the rhetoric from a certain Donald Trump, from banning Muslims from coming to America to requiring them to carry special ID cards, is really not doing much to ameliorate these feelings; particularly because of the surprising number of Americans that support such radical and un-American ideals.

As a therapist-in-training, I can't help but compare this experience like the feeling of having a family member who is an undiagnosed schizophrenic. Say it is a brother. This is your brother who you've grown up with, and everyone knows that you're part of the same family. You grew up together, and were taught the same things and lived relatively similar lives growing up together. You love your parents, he loves your parents, and your parents love you both; and you both love each other.

But then one day, you notice him starting to act differently. He grows distant, from both you and your parents. Then he really starts to act differently, from being completely absent while speaking to him, to violent explosions of anger towards you and your parents. Then he starts to say crazy things, about hurting himself and hurting you. Things that your ears can't believe they're hearing. This is now how he sees the world, and his actions are not like the brother that you once knew. Yet no matter what you do, he is your brother.

What now? Do you push him away, knowing he will always be a part of your family no matter how much you may want to not be associated to him? Or do you acknowledge he is your brother, albeit with a distorted picture of reality? And most importantly, how do you help him when you can barely talk to him?

This is the dilemma of normal Muslims and their radical Muslim cousins.

We, normal Muslims, know what we believe. We've learned it from birth, and many of us have internalized it deeply and love our way of life to the fullest. And knowing this, we know that what our cousins, these radical Muslims, are doing is an utterly gross misinterpretation of our way of life that we cherish. Trust me, we know this (and to be honest, most of us are too tired to care anymore whatever else anyone tells you).

Yet at the same time, we can't deny that probably 90% or more of what our psychotic cousins believe is the same as what we believe. They believe in one Creator and the same final Messenger, they pray (ostensibly), they fast, they give charity (again, ostensibly) and they read the same words of God, i.e. the Qur'an. Technically speaking, we really can't deny that they're Muslim.

So where are we then? Well, they're part of our religious family, and we can't really hide that. It just also happens to be that they have a deeply sad and distorted reality that allows them to justify such horrible acts as blowing yourself up in order to kill innocent men, women, and children (both of which, suicide and murdering of civilians, are well-known by normal Muslims to be strictly outlawed in Islam). Honestly, their moral conscience and value of human life is twisted to the point of being clinically diagnosed with a severe mental disorder, at least in my book. But would anyone really disagree?

Understanding this, you might be in a better position to understand how we normal Muslims may be feeling. But rather than spell it out in words, I'll share one last metaphor that will hopefully do a much better job than I can:

How would you feel if you had a schizophrenic brother that you just found out walked into an elementary school and shot to death 20 kids and 6 adults before shooting himself in the head? That's right, your brother.

Would you be ashamed? Probably. Guilty? Somewhat, yeah of course. Why? You're probably not too sure. Maybe you could have done more? Regret I'm sure is in there somewhere. Fear of showing your face in public is probably growing pretty quickly too. Do you think we'll judge you? Should we judge you?

Should I stop trusting you? Maybe I know you're not really a part of it, but I'm not sure. Should we arrest you for not doing more? Should we kick you out of our country because you share the same genes and we think you might think just like your brother did? Maybe tracking you is a more reasonable option? Should I hate you because your brother killed my brother? Shouldn't you feel worse about what your brother did? Shouldn't you feel pain and guilt for this? What the hell did you and your family do that made him do this!