Fresh powder is the Holy Grail of snowboarding -- but the next best thing is sweet, smooth corduroy. Carving turns on a perfectly groomed trail under deep blue skies is one of the best experiences on the hill. Did you ever think about what really goes into the grooming of the trails on your favorite ski hill? Read on to learn some things that you might not know about preparing the buttery smooth snow surface that's so fun to carve. 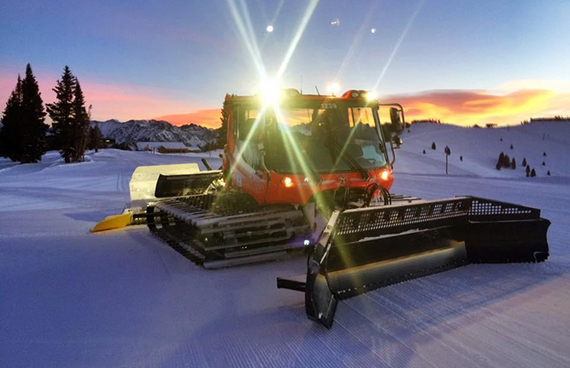 1. The Night Shift
When you show up in the morning and click into your skis, you might not realize that a whole team of employees has been working all night to prepare the slopes. Most ski areas start grooming operations right after the lifts shut down to the public. At Okemo Mountain in Vermont, the snow surface crew works in two eight-hour shifts: 4:00 p.m. to midnight, and midnight to 8:00 a.m. These two shifts allow the central Vermont ski area to groom 550 acres of terrain each night of the season, nearly 90 percent of their skiable terrain. If a resort has night skiing, then the time available to conduct grooming operations is compressed between the closing of night skiing and opening of the lifts the next morning.

2. Pursuit of Perfection
The grooming team is dedicated to producing the best surface they can. Sometimes, this can mean grooming trails over again if the weather changes and the snow "sets up," or freezes into rock-hard boilerplate when the temperature drops.

Greg Fisher, General Manager of Mad River Mountain in Ohio commented, "If the temperature drops from above freezing to below freezing after a trail has been groomed, it will become quite hard. Those are situations where if we can wait until the temperature changes, we'll do so. Otherwise, we'll re-groom the trail."

Using the tiller on the snowcat can help to break up the hard snow ("similar to the way a farmer tills his field," says Okemo's Director of Public Relations, Bonnie MacPherson) and create a softer surface for skiing and snowboarding.

3. Terrain Parks
Next time you're grinding a rail or throwing a dinner roll off the halfpipe, tip your helmet to the groomers and the terrain park crew. A safe, well-groomed and well-maintained terrain park is a time-consuming and difficult proposition.

"Continual and consistent maintenance of the terrain park is extremely important to ensure quality conditions and the safety of skiers and snowboarders, which is always the highest priority," says Mike Cutler, Mountain Operations Manager at Crystal Mountain in Michigan. It takes a very skilled and experienced cat driver to sculpt and create the right flow through a terrain park. Greg Fisher notes that, "We have dedicated cat drivers assigned just to the terrain parks to ensure that jumps, transitions to rails, and placement of features are correct." 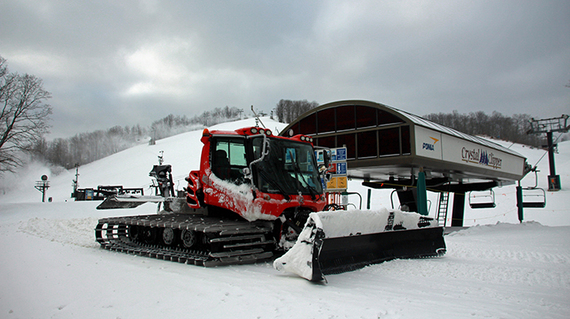 4. Noon Groom
Occasionally, the grooming crew will touch up a trail in the middle of the day, though such an endeavor can be tricky. Circumstances that might necessitate grooming in the middle of the day include re-opening a trail after a race, extended late night sessions (Mad River Mountain is open until 3am some weekends), during busy holiday seasons, or for weather factors such as heavy snowfall.

If a trail is to be groomed while the rest of the hill is open to the public, the ski patrol closes the trail so the cat drivers can safely make their grooming passes on the slope. However, "it can be challenging for patrol to keep a crowd of people behind the ropes, and word travels quickly around the mountain when we do midday grooming," says MacPherson. The competition for first tracks on a noon groom can be as intense as when patrol drops the ropes on a powder day! 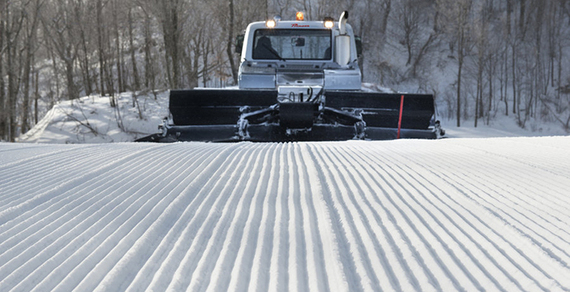 5. Toys for Boys (and Girls!)
The most fun part about grooming snow? The grooming machine itself. Okemo uses the Prinoth BR500, affectionately called "The Beast" by the resort's mountain operations staff. "It's a very big and powerful piece of equipment that is fun to operate and has a pretty comfortable cab," remarks Art Farrington, Okemo's Grooming Shift Supervisor.

Another enjoyable part of grooming is the pride that the staff takes in preparing a snow surface for customers to enjoy. "It's satisfying to look over a freshly groomed trail first thing in the morning to see a beautiful carpet of corduroy," comments Fisher. Finally, the "peacefulness, beauty and solitude," of working at night is part of the job that many on the grooming staff enjoy, according to Kim Jochl, Marketing and Public Relations Director for Sugar Mountain in North Carolina.

6. An Investment for the Customer
Every person your writer contacted for this article agreed that the thing most skiers and snowboarders probably don't realize about grooming is how expensive it is - both the snowcats themselves and the time and expense in running the grooming operations.

The cost of a snowcat starts at $300,000 per cat, and the manpower and maintenance expenses that accumulate on a daily basis really add up over the course of a season. However, it's an investment in the experience for the customer, and one that the mountain operations staff takes seriously. "Skiers and snowboarders expect nice corduroy at first chair. We need to deliver every day and we have crew here that does an exceptional job," says Crystal's Mike Cutler. 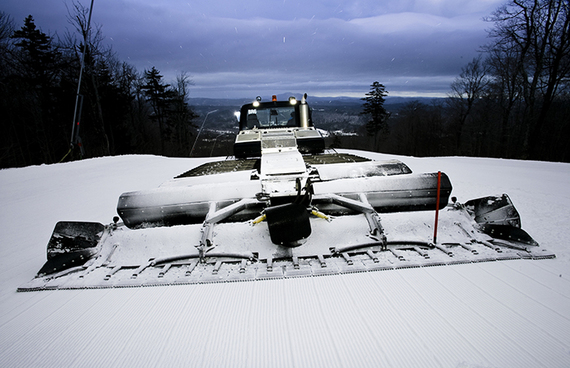 It's easy to tell the ski areas that are passionate about providing the finest groomed trails for their customers. Just head out to the slopes and see for yourself. The ones that do grooming the best -- well, the evidence is right under your feet.