I truly believe Jennifer Lopez's greatest contribution to this world will be the way she embraced and flaunted her phat ass. I am dead serious about that and I say it with the utmost admiration and reverence.

Remember when she first came out and she did this Vanity Fair shoot in the corseted vintage?

I remember being awestruck by this image and thinking, Who is this girl? And I'm not even a curvy chick so she wasn't repping for me. But it meant something to me and I'm not even sure I knew what at the time. This image, and others like it, changed women's lives. Seriously.

Because J. Lo was not one of these women who was modestly embracing her curves like, say, Kate Winslet. Nor was she an overweight woman putting on a good show of acceptance like Star Jones trying to convince everyone that she was fine with being 300 pounds as she wheezed through an entire episode of The View. Even Gabby Sidibe, and readers of my blog know I'm Team Gabby all the way, isn't saying she wants to be the size she is. She's saying she accepts it and loves herself because that's who she is and she's not going to go through life hating herself.

Well, J. Lo has always been the bad bitch whose message was clear: I'm the shit. I know it and you better fucking know it too. Love me or leave me alone.

All praise to Madonna, the ambitious hypersexualized icon who has promoted her sexuality with surgical precision and managed to stay relevant for 20 years. But let's keep it real, sex is her brand, few think she is sexy. Not so of J. Lo!

She was the Sex Symbol, the chick who became a prize to the hottest dudes in the game, the chick who showed up on red carpets in body-hugging Legers and generously served up backshots, the chick who put out synthetic Ja Rule collabos and generic rom-coms that she hustled to #1 through sheer force of ass.

She was the dark-haired, pale-skinned okay-looking back-up dancer on In Living Color and Yo! MTV raps who transformed herself into a bronzed, honey-haired A-list glamour girl and sex symbol right before our eyes.

She was the chick who showed up at the Grammys in the Versace dress that everybody talked about for weeks, the dress we will all remember twenty years from now, and reduced Puffy to nothing more than forgettable arm candy.

She was the It Chick who went from being a rap mogul's moll to snagging a 6-carat Harry Winston pink diamond from the whitest Ken Doll Hollywood had to offer and when things went hella wrong, she extricated herself and went home to papi who she knew could hold her down since he was as successful and paid in his world as she was in hers. And hold her down he has.

I know there are plenty of women who say, "I don't like J. Lo because she's a diva!" to which I say, "Is she?" Or is that what we've been brainwashed to think she is because she's the bitch who didn't know her place? And even if we agree to say she's a "diva", which is what we'll call her or Barbra Streisand or Madonna but never Madge's volatile ex Sean Penn, my response is, "So what?"

To be a superstar on that level, you have to be what the layperson would term "a diva". It's a prerequisite of the job. You wanna be the good girl and everybody's bestie? Become a kindergarten teacher and let the divas build their empires. 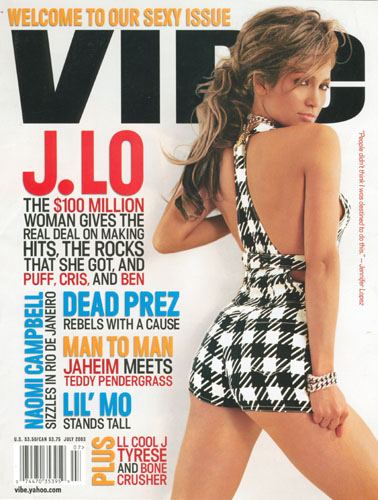 From what we know, J. Lo only has two close friends. Her sister and Leah Remini, an admitted ballbuster who didn't just play one on TV. This makes perfect sense. To think people should pay to see your face 70 feet high on a movie screen, to think people should pay to download your tunes or fill a stadium to hear you sing pop songs or ask you to scribble your name on a slip of paper, you have to have a healthy ego. Beyonce has it, Jennifer Garner has it, Sandra Bullock has it, Reese Witherspoon has it. You don't make $20 million a picture or get on the Forbes Richest List by chance. You get there by being ravenously ambitious and wanting it more than everyone else.

But when you're a woman you have to pretend you don't want it. You have to pretend it just miraculously happened. All of those A-list America's Sweethearts avoid the diva label because they're better at hiding their ambition and playing the "I'm just so lucky to be here" game. They're better actresses than J. Lo and some of the best acting they do is for Jay Leno.

Or, in Beyonce's case, you invent an alter ego onto whom you shunt all your ambition and sexual aggression, allowing you to giggle and coo through interviews. Which is all good if that strategy gets you win after win but how fascinating that her husband, who gave himself the name of a God, stands on the same stages and his only "strategy" is to say, "I'm the baddest richest nigga out here and you will all worship me for it". And we all bow down to Hov, as told - Corporate America included.

What's the worst that we've ever heard about La Diva Lopez? That she wants white candles in her hotel room? Charlie Sheen bangs hookers for sport, whether married or not, and still makes $22 million a year to star in Two and A Half Men. John Edwards cheated on his terminally ill wife while he was running for president then went on television and denied paternity of the love child he knew was his. Eddie Murphy had a child with Mel B, aka Scary Spice, who he refuses to acknowledge and still gets $20 million plus a cut of the gross to star in family movies as the lovable dad. And we want to stone J. Lo for allegedly being a high-maintenance diva? Let her have her fucking candles!

Not to take anything away from her as an ambitious woman or the actress we all loved in Selena (what happened to her?) but That @$$ has played an integral role in making her who she is. Because she leveraged it for all its worth. No, it was never insured for millions but, according to this article, she found that story very funny. I bet. What a flattering rumor!

And what a unique distinction! It's one thing to win a Grammy or even an Oscar, but imagine knowing you made a whole generation of women feel better about their bodies? Because of J. Lo there are millions of bootylicious women who stopped wearing baggy jeans and started wearing tight ones. That doesn't just mean something -- it means a whole helluva lot. 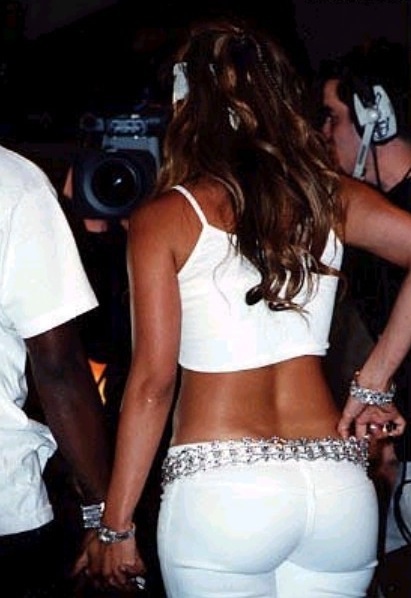 Black and Latino people always appreciated a healthy badonk but before J. Lo, white folks weren't trying to get ass implants. Before J. Lo, mainstream media was not giving props to the junk in anyone's trunk. Before J. Lo, there were not Eye Candy chicks making a living off their (faux) asses. Before J. Lo companies were not selling butt pads in one-stop booty shops.

J. Lo became a global superstar and created an Ass Industry. And this is Latina Jenny from the South Bronx block whose parents wanted nothing more than for her to be... a paralegal.

Because she's been A-list for so long some might say, "Well yeah, she had attitude because she's gorgeous so it was easy for her to say/do/be that." First of all, we know what she looked like in the In Living Color days so even her marketable attractiveness is her own well-crafted creation so she deserves props for that. Secondly, this shit looks easy now -- for Jessica Alba, for Zoe Saldana, star of The Highest Grossing Movie of All-Time -- because Jennifer Lopez made it easier for them. But there were (and still are) plenty of chicks -- black, white, Latina -- who would have whipped themselves into a self-hating frenzy trying to work that ass and those curves off in an attempt to fit the Hollywood mold. J. Lo wasn't that chick. And because of her, the next chick doesn't have to be either.

Without J. Lo, Kim Kardashian would never be as popular as she is. This we know. Because KK doesn't have any albums or movies to plug. All she's got is ass. Which she's riding all the way to the bank. And she knows who made that possible which is why she gives props to her ass mentor whenever she can. But fuck a smile, Kimmy, you should be giving J. Lo 15% of your assets!

I've thought of the Meaning of J. Lo's Ass quite often (yes, it's true) and I've wanted to post about her for some time because she is a quintessential FEMINISTA. She's as ambitious and ballsy (conscious word choice) as they come but she's also a girly girl. An A-list star who is also a wife and a mommy. The kind of woman who loves to dress up, giggles easily and is always getting married or engaged because she's in love with love. But at the same time, I wouldn't want to cross her. That's FEMINISTA.

Reading this article in UK Daily Mail, during her press tour for The Back-up Plan, where she gives the "down low on her famous derriere" was what finally provoked my J. Lo manifesta. She is still looking FEMfab at 41, after having twins, so brava to her. But what a bittersweet irony that the famous derriere that helped propel her to pop cultural icon status is the thing she has to dish about now that her acting career is hanging by a thread. It's a sad commentary on either how limited the space is for women in Hollywood or her management -- or both -- that someone with her star wattage can't come back after taking a few years off. Especially unsettling when she took that time off to have kids after spending her entire adult life building a career. I wouldn't presume to understand all that goes into crafting and maintaining the kind of success she's had but anyone can see that she needs to do something to get back on track and not have blogs writing stories like this. And this. And this.

And as a longtime FEM admirer, I hate seeing that brash Bronx chick who always marched to her own beat, flaunting that ass every step of the way, scrambling now to stay relevant. That "Louboutins" performance at the award show when she fell? The fact that she's even putting out an album at this point and the first single is called Louboutins? That catsuit she wore on New Year's Eve which got her on the cover of the New York Post but reeked of desperation?

Time to reboot, mami, and not in Louboutins this time.

I admit I have cracked on J. Lo a-plenty because she's an easy target but honestly I would love to see this FEM get her groove back. And maybe the shots I've taken at J. Lo are what turned this intended-to-be short post into a long one. I think I needed to release the FEM guilt I feel for not having a sista's back. Especially when I know we live in a world that is more accepting of so many of us because of hers.