Penn State's Head Football Coach, James Franklin, was named the 2016 Big Ten Coach of the Year earlier this week. Franklin steered the storied football program to an improbable 10-2 regular season, a Big Ten East Division title, and a spot in Saturday's Big Ten Championship Game against Wisconsin - a remarkable achievement considering the crippling NCAA sanctions that have overshadowed the program during recent seasons.

A spot in the College Football Playoff potentially awaits the team as well - a feat viewed by many as unthinkable given what the program has been through. The 2016 storyline for Franklin and Penn State surprised so many that ESPN College Gameday Analyst, Kirk Herbstreit, called Penn State the "college football story of the year." 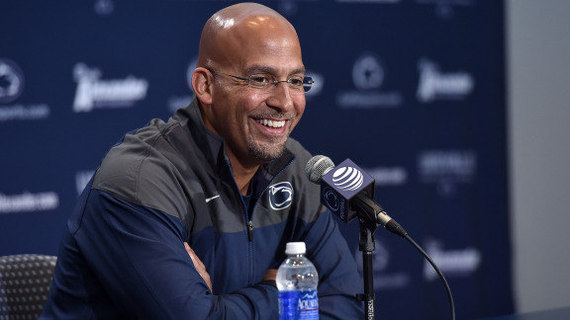 As I reflect on what James Franklin and Penn State have accomplished, I am reminded that Franklin's predecessor Bill O'Brien was named 2012 Big Ten Coach of the Year just four years ago. O'Brien was recognized largely for guiding the program through its darkest days, keeping the team together, and achieving a level of success on the field that, similarly, was viewed as virtually impossible.

O'Brien and Franklin will forever share a place in Penn State history - both as Big Ten Coach of the Year recipients but also as leaders who inherited a set of circumstances ripe with immeasurable challenges and achieved exceptional success.

There are many lessons that leaders in business, community, and sports can learn from Bill O'Brien and James Franklin.

Bill O'Brien and James Franklin were both remarkably successful at keeping the team together and attracting top talent to Penn State despite the unprecedented sanctions levied by the NCAA.

"O'Brien came along when Penn State needed a strong willed fighter who had to re-recruit his team and then keep them together" says Steve Jones, the legendary radio voice of Penn State football. "He brought a style of offense that was difficult for the Big Ten to adjust to," Jones continued.

When O'Brien left Penn State to become head coach of the NFL's Houston Texans, Penn State hired James Franklin - and he has proven to be the right person for the job. Franklin has shown an ability to not only attract great talent, but to attract the right talent. Franklin hired Joe Moorhead as offensive coordinator because Moorhead's style of offense fit the players Penn State had recruited.

Bill O'Brien brought a unique attention to detail and degree of focus that enabled him to implement a pro-style offense at Penn State - quickly. To accomplish this, he needed buy-in and commitment to detail from his players.

James Franklin came with a tremendous amount of positive energy, discipline, and progressive thinking. He had a long term plan and, according to Jones, "never panicked." This plan included creating a vision, establishing a culture, and patiently executing on the plan. He stuck to his vision and did not seek short-term success at the expense of the long-term objective.

Like leaders of any organization, college football coaches have many stakeholders - university administration, players (and their parents), alumni, donors, and more. O'Brien and Franklin both are articulate and exceptional communicators. I have attended events where each respectively presented their vision for the program and their planned approach - it was clear, direct, and easy to understand their core values.

As a proud Penn State alumni and an ongoing student of leadership, I was emotional this past Saturday during the final moments of Penn State's win over Michigan State that secured the Big Ten East Division title. My mind raced thinking about all of the individuals that have had a hand in Penn State's recovery - there are too many to name but two names stood out in particular.

Thank you, Bill O'Brien and James Franklin - for bringing Penn State football back and, most importantly, showing us what can be achieved when businesses, teams, and communities work together, stay focused, and believe that anything is possible.