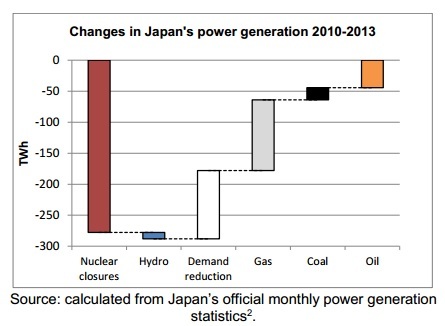 After the Tohoku earthquake three years ago in March 2011, Japan was in a seemingly impossible situation. A tremendous amount of conventional generation capacity, including the entire nuclear fleet, was unavailable and the country faced the risk of power cuts during summer consumption peaks. But miraculously, or seemingly so, in just a few short weeks Japan managed to avert the rolling power cuts that many believed inevitable. Even more impressive, they have turned these emergency measures into lasting solutions. So how'd they do it without forcing people back to the stone age? Japan overcame this daunting task by tapping the cheapest and most widely available source of energy we have -- energy efficiency and energy savings.

Much of the electricity savings were initially driven by a popular movement known as "Setsuden." This movement emerged to encourage people and companies to save electricity and prevent rolling power cuts. Simple measures such as increasing temperatures in homes and offices, "thinning" lighting by removing some of the bulbs and tubes, shutting down big screens and exterior lighting -- and even electric toilet seats, a Japanese peculiarity, enabled Japan to dramatically reduce power demand almost overnight (albeit at the cost of a small amount of personal comfort). In addition, to these measures the dress code in offices was eased to reduce the need for AC and both large and small companies were audited to identify savings potential.

These temporary measures have proven to have long term impact. They've dramatically increased the awareness of energy use and energy efficiency, with large companies running high-profile lasting programs. As a result, power consumption never rebounded despite GDP growth, as energy conscious practices became ingrained. More importantly, there is huge potential for technical measures to reduce energy usage even further -- a resource that has only begun to be tapped into.

What's more surprising than Japan's impressive energy savings is just how far off the very serious energy punditry was on the impact this would have on the nation. Aside from worrying that the sky would fall, this punditry made dire predictions about the need to replace the nuclear fleet with "cheap coal" (a myth we debunked here). Of course through a combination of common sense energy savings measures that begun as temporary behavioral changes, they've instead turned to permanent efficiency gains. In the process, the Japanese people, and its business community, proved the punditry wrong.

The key lesson from the Japanese experience, the one pundits failed to appreciate, is that coal plant construction is simply too slow to be relevant in the modern world where resiliency is highly valued. To cope with rapid loss of generation capacity, Japan needed fast, nimble and modular 21st century solutions. That means efficiency and clean energy. Despite major hurdles to deploying these solutions, due to a complete absence of renewable energy policies prior to Fukushima, solar power surged in 2013 blowing away earlier predictions. In fact, Japan invested the most money in solar power of any country in 2013 and this investment will grow rapidly in the coming years.

In contrast, coal power projects proposed in the wake of Fukushima are still sitting on the drawing board. By the time they are online their output will be rendered obsolete due to the rapidly dropping price of renewable energy. Worse, these investments lock Japan into a volatile international coal market. Japan need look no further than India's recent imported coal debacle -- Tata Mundra -- for a warning of what that market can do to energy security.

At the end of the day energy security is important, but aligning energy investments with the need to address climate is an even more pressing concern. Replacing half of the nuclear fleet with efficiency and the other half with fossils (mostly gas) is of course not enough for an advanced country like Japan. As global greenhouse gas emissions need to peak urgently, Japan must begin reducing its emissions. The easiest and most important step it can take is giving up on the illusion of the need for new coal plants. Because after all, the efficiency gains and promising developments with renewable energy show that Japan can be a leader in 21st century energy solutions.