Best selling novelist and children's book author, Judith Viorst, well know for the children's Alexander series, gave me a wonderful gift recently. Actually, Alexander played a hand in this gift giving as well, though neither knows it. None-the-less, a gift they did give and a wonderful one at that.

A few years ago Alexander, now grown with a family of his own, asked if he could move back into his parent's home for a couple of months during a home renovation. Considering his history with his mother, he really should have known what would happen. As a little boy who hated his railroad train pajamas, lima beans and plain white sneakers, Alexander had always proved fodder for his mother's writing. The first Alexander book in 1972, Alexander and the Terrible, Horrible, No Good, Very Bad Day was followed by Alexander Who Used to Be Rich Last Sunday and Alexander Who's Not (Do you hear me? I mean it!) Going to Move. Then, just months after Alexander and his family of five moved out, a fourth Alexander book came out, Alexander and the Wonderful, Marvelous, Excellent, Terrific Ninety Days. 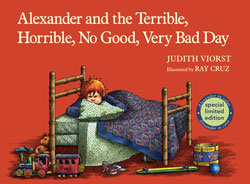 An immediate fan of the laugh-out-loud-funny Alexander books that I read daily to my children during their pre-school years, I am thrilled with this latest book. Thrilled, because what Viorst learned from her ninety-day intergenerational experience is enlightening - a gift, in fact, to all 21st century parents, mothers especially. Why? Because Judith with her Compulsive, Over Anxious, Type-A, Raised Three Children (without a Nanny) While Writing Best Selling Books Personality actually proclaimed in a recent talk, "it was easier to raise children when I was raising children."

Oh Hallelujah and say Amen! And I had thought I was going crazy.

Viorst's declaration, I'll repeat it as an ego-boost to parents everywhere, "it was easier to raise children when I was raising children" (I do love the way that sounds!), stemmed from her three month study of the crew she lovingly calls, "The Alexander Five." The group consists of Alexander and his wife and their three children, who at the time were five years, 24 months and four months. Her study complete, Viorst came to a number of conclusions about child rearing in our electronically motivated, kids-come-first, safety conscious world.

1) The Car: When Viorst was raising her children in the early 70s, she piled eight or nine kids into her small station wagon without thinking it could be dangerous, without concerns for car seats, seat belts or head rests. They climbed in on their own and then, doors shut, she shifted into drive and took off. Fast forward 40 years and Viorst is exhausted: 90-days of buckling and strapping her grandchildren then unstrapping and unbuckling them and then doing it all over again for the return trip. She says, it nearly did her in. "Do you have a clue of how easy it used to be to just leave and go back home again? I acknowledge that the locking and loading into the car with all the belts and buckles is a necessity, but it used to be so easy."

2) The Playpen: According to Viorst the banishment of the playpen is tragic. As she recalled this product with great affection, there may have actually been a tear in her eye. "I'm trying to start a campaign," she said, "a bring-back-the-playpen-movement."

Those who have never used a playpen -- and I include myself in this group -- have no idea why it is such a lifesaver. Not one of my three children ever experienced time in a playpen. But when Viorst explained all the things a parent could do by simply plopping a baby or toddler into a playpen, I listened in awe thinking about how different my life would have been had I invested in a playpen rather than all the other baby items I had purchased. The baby backpack for example. I actually used to cook with "the baby" (number one, two or three) strapped into the backpack on my back. I'd coo and point out his or her reflection in the window over the sink, all the while trying to chop and mix and measure. It was madness, yet at the time I had congratulated myself on my ingenuity. After all, I was able to cook dinner and the baby never once cried. Genius.

Now, reflecting on Viorst's poetic descriptions of the playpen I think how much sane time I could have added to my life had I purchased a playpen. Just think, a parent with a playpen can go to the bathroom alone, read the paper, work on the computer, drink a cup of coffee, even make a bed all alone. Not to mention the added bonus: without any effort at all on my part, with a playpen I would have been encouraging my children, actually teaching them, to figure out how to make themselves happy rather than relying on me.

Pumped by her bring-back-the-playpen movement, Viorst says she has even written campaign slogans: "Free to pee, not you, just me" and songs: "Where have all the play pens gone." While I did, without a doubt, wonder how wonderfully different my life could have been in my children's early years, I must admit I squirmed a little uncomfortably in my seat. After all, isn't the "good mother" supposed to carry her baby everywhere she goes? Isn't the mother suffering from Carpal Tunnel Syndrome the most extraordinary mother of all, replete with a badge of honor in the shape of the blue Velcro wrist straps she wears until the pain goes away or until her child goes to college?

"Where on earth," Viorst asks, "did that idea come from?" After all, when she was a young mother 40 years ago, putting a baby down was never tantamount to child neglect. Yet four decades later, mothers "wear their babies."

So where did this concept come from? Viorst has a theory. Read on ...

3) Raising the Bar: The answer is in "the bar," says Viorst. Not the alcoholic beverage bar (although not a bad idea), but the bar that divides the mother who works in the home from the one who works outside of the home. The pressure on each is extreme. The working mother, guilty that she has been away from her child for hours at a time, compensates with the much written about "floor time," having been told that quality is more important than quantity. So at the end of a long, exhausting workday, she works at playing with her child.

The at home mother who does not lack time, suffers her own pangs of guilt for having given up her career to stay at home. Thus, she feels obliged to prove, actually to justify her decision, by becoming the absolute best mother in the universe. And so the bar is raised and raised some more and raised to such astronomical heights that today's mothers ends up in a Catch 22 even Joseph Heller could not have imagined. Quite different from Viorst's child rearing years when there were two overriding themes: "A happy mother makes for a happy child" and "A good enough mother is good enough."

"You're going to screw up," says Viorst, "but you're going to get another chance and a chance after that and another after that. Little people don't get scarred over one or two words. I think parents are putting too much pressure on themselves." Those words are so soothing, they feel like a massage!

4) Explanation Society: Viorst is overwhelmed by all the explanations that parents today feel obliged to give their children. She says explaining why was not a rampant theme for parents when she was raising her three boys. Her generation of parents "felt allowed to be more Fascistic. We were 'benevolent dictators.' We could respond with 'because I said so,' and 'that's because we're the grown ups and you're the kids,' and that was reason enough," Viorst says. Today, too many parents feel that they need to carefully explain their decisions to their children, decisions such as "why it's not such a really good idea to draw on the living room wall with Mommy's lipstick or why a kid should consider taking his foot off a child's face." Viorst says a parent should be able to say, "enough now," and be done with it.

So why the difference? Are we a generation of parental explainers because when we were kids we got sick of being told, 'because I said so'? Actually, Viorst theorizes that our present day "Explanation Society" stems from the fast-changing times, a pace that leaves "kids growing up faster and demanding answers immediately." When she was a parent "we didn't have to be so detailed with our replies" partly because the questions weren't so complicated. When children are exposed to a more perilous world, one riddled with pedophilia, AIDS, drugs, suicide bombs, sex -- in other words too much information -- parents have a whole lot more explaining to do and explanations become a way of life.

And so there you have it, the gift. Thank you, Juidth Viorst, for seeing through the new fangled gadgets that profess to make parenting easier and for realizing that it may actually be harder. Thanks for helping me realize that it's not that I failed to be as good a mother as my own mother was, but that we raised (are raising) our children in different worlds.