This article originally appeared on Musings on Motherhood and Midlife

Corporate American might have been trying to screw me out of what was rightfully mine, but I had a secret weapon on my side -- my father. 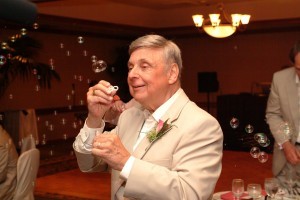 Back when I was in college at Boston University, during the summer of my junior year, I had an internship at a public relations firm (I majored in communications, with a minor in public relations). It was a hip, fun agency with cosmetic and skincare clients; and I'm not ashamed to admit it, I had a huge crush on the handsome son of the owner, which made going to work every day a lot of fun.

What was extra special about this internship was that it was a paid internship and I relished the $150 a week I made, and felt very rewarded for my hard work, which entailed phone calls, direct mail assembly, curating media materials, assembling press kits, composing thank you notes, collecting and filing clips and even attending brainstorming sessions (which I found really exciting).

I felt I was in my element, and in my customary way of totally immersing myself in an experience I lived and breathed for this internship. Then they asked me to attend a baseball game client event. Why this happened, I have no idea... not any more, but I do know it was over 90 degrees that day and I was out in the hot sun.

If you know me, you know that I can't tolerate the hot sun for more than a few hours. So what happened? Instead of getting soft drinks and water for the client, and acting as a gopher, I found myself in the midst of heat stroke, feeling nauseous with my head between my legs. My employers quickly moved me out of the sun, and gave me ice to suck on, but were visibly annoyed that I was useless for the rest of the day. I was annoyed at myself, too but I was also quite ill.

The next week, I noticed a bit of a chill in the air. Then, I went to the copy room and found a piece of paper lying around that had just been copied. It welcomed the newest intern starting the following week, and clearly stated that it was an internship for credit, not for pay. I felt like I had just been punched in the stomach, and knew that I was looking at my replacement. I folded up the announcement, placed it in my purse, and went on with my day with a feeling of dread. The next day, the vice president I reported to, called me into her office and told me that they were unable to continue paying me for the internship, so they were very sorry but they were no longer going to be able to continue my employment there.

She saw how upset I was, and said if I needed a moment to collect my thoughts that would be fine. I went into a conference room and called my dad.

"Daddy, they are letting me go. I know it's because they are getting another intern that they don't have to pay, but they don't know I know that."

This is the advice he gave to me. "Estelle, calm down. Listen to me. Don't tell them that you know that they are getting another intern. Go back in and tell her that you are upset, but you understand and would like her to give you a reference so you can get another job. Make sure she gives it to you now. Then go around and tell everyone goodbye, and say that you are leaving because of 'financial' reasons. Let them wonder what you mean when you say that. We'll talk more about it when you get home tonight."

I followed his advice, and secured a glowing reference from the vice president, who undoubtedly felt guilt stricken by the decision to replace me. Then I went home and fell apart. I was inconsolable at the loss of this job, that I was so dedicated toward, that had meant everything to me. Plus it was mid-July, and I had about six weeks left before I'd be heading back to school; what would I do with myself? How would I get another job I loved, like the one I had lost?

I threw myself on my bed, sobbing in agony. My dad quietly entered my room and told me this: "Estelle, stop crying honey. Stop crying. Don't worry. We're going to sue them. We're going to take them to small claims court for the $900 they owed you to finish out the summer."

With those words, my dad gave me hope. Hope that I would be vindicated. That this experience wouldn't be for naught.

When we got to the court a few weeks later, the vice president and her husband, a high-powered attorney, looked thoroughly annoyed that they had to sacrifice their time and energy to deal with me.

I didn't have a lawyer representing me, I had my dad. He told me to tell the judge my story, and I did. I emphasized how much I loved the job and how devastated I was when I lost it. How I had turned down another paying internship to take that one (I had a letter to that effect).

Finally, they said that I was shirking my responsibilities that Saturday when I was at the client baseball game, and my dad had a letter from my doctor saying that I had suffered from heat stroke. They looked shocked, confused, and totally blown away by our well-thought-out and well-supported case. The judge asked all parties one final question. If he rules in favor of one or the other, would we be willing to split the money in half? They immediately said no. I wanted to say no, but my dad said, "Estelle, say yes -- show that you're fair," so I did, no questions asked. That sealed it for the judge.

I won the case and a few weeks later (while at my extremely tedious, and never-to-be-repeated again job in shipping at a local warehouse) a check from the public relations company in the amount of $900 came in the mail. Justice had been served. And more importantly, I had learned a valuable lesson about standing up for myself.