There's a change in the winds at some of the larger brands as they try to shift from telling their story in paid media to engaging users and customers.

Social media has come on fast, and there's no doubt that its left some folks a bit disoriented.

Kodak has been surprisingly nimble in adopting social media practices, in no small part due to the work of Chief Marketing Officer Jeffrey Hayzlett.

The CMO lends his South Dakota sensibilities and entrepreneurial history to Kodak as the shift from film to digital opens new opportunities for the Rochester-based image and printing company. 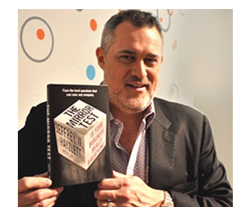 Hayzlett's story starts with a failed attempt to corner the commercial pheasant market. Really -- you can't make this stuff up. He explains, "I am one of the biggest ambassadors for the state of South Dakota and one of the biggest cash crops that we have is pheasant hunting. So why not start a pheasant farm? I was letting my heart drive my business decisions, rather than my head, and that's when people have big problems. I tried to corner the market on pheasant farming, until I realized there was not one."

Lesson learned? Temper your passion with data. Hayzlett says lots of "C" level execs believe their own PR. "We get these entourages of people around us who tell us what's in the press release is true, and it's not, and so it's good to have that."

For some marketing execs, the world is moving too fast, so they'll wait it out till the new standards develop. But not Kodak. Hayzlett says, "I'm about speed. I have a program inside of Kodak that's called F.A.S.T. It means speed, right? Even if we screw up, let's do it faster. Social media is nothing but a tool. I look at social media like a fax machine. It's just a different way of me telling the world what I'm doing, or what's going on. Getting my message out."

But Hayzlett isn't saying that social media replaces advertising. In fact, he says it's less selling, and more connecting. He explains: " You don't just vomit up information and sell, sell, sell. But there are some things that you can do; contests and some other things that get people attracted to it from a brand prospective. And really build community. So it's not about building eyes and ears, it's about building hearts and minds. And I think that's what's really good. If your business isn't doing this, then you're really screwing up. I think you're making a big, big mistake."

In part channeling his experience at Kodak, and in part connecting with his career experience in business building, Hayzlett has written a book out this week, The Mirror Test. The book is 110% Hayzlett, full of stories and real life examples of how he leads his life as a marketer, business builder, and human dynamo.

One story begins in line at a McDonalds drive through: "So I was a customer, I went to McDonald's. I yelled into the little box of what I wanted. And I pulled up to the first window, I gave them my money -- that's a contract, I pull up to the second window and nothing's there. And they said: 'Well, Sir. If you move right over here -- park over here, we'll bring it out to you.' Well, that's like purgatory. You know, it's hell over there. Parking purgatory. And I just turned back to the person and said: 'No. I'll wait.' And I rolled my window up."

Minutes passed as the line backed up, with Hayzlett waiting for his burgers. Finally, the assistant manager tapped on his window: "He says: 'Sir, if you don't mind pulling up... We have other orders.' I said: 'No, I don't mind waiting.' And I rolled my window back up. I've made this contract with them. This is what they've promised. This is a fast-food place, I expect it fast, you know, and so forth."

As Hayzlett sees it, a contract is a contract. And FAST means fast. He explained it to the McDonalds manger this way: "'Look, you didn't offer me free fries. You didn't offer me hash-browns, you didn't offer me a little chocolatey-shake, or minty shake. Or something, maybe I would like. So no, I think I'll wait.' So then they rushed to get my order. Now I know when I go through there, my order comes out pretty doggone quick."

This kind of story is woven through The Mirror Test -- real-world fables about businesses that need to do more than make empty promises. "I sit down with my team and I say: "This is what I expect. Are you gonna deliver?" And if they say that they are, then I expect that to be delivered. It comes with trust and trust is something that we grant sincerity for, but then there's reliability and competency. I think that they were very competent in taking my order, and I trusted that they were going to deliver it."

The web speeds all this up for brands. But they ignore it at their peril.

"At Kodak, our complaints used to be like 40-some percent of our internet traffic. You know, before, cause that's just the way it works. Now it's less than 7 because we integrated with this and said 'Okay, when someone says 'f you and your f-ing product, you f-ing suck'. Okay, that's someone who has a problem. I wanna hear that. I wanna know that person. And I wanna reach out to them and say 'what's your problem?'. I call it the R.O.I., return on ignoring. So, if you ignore these people, these conversations are going on with or without you. I'd much rather be engaged with them."

Today, brands are having a conversation with their public, and sometimes those conversations aren't all warm and fuzzy. There's no doubt that all this change doesn't come easy, and given his outgoing nature you can imagine that from time to time the folks at Kodak might wish if he were, ehm, a bit less 'social.' Hayzlett tells one story this way: "I've had in the corporate world my public relations, community relations people walk up to me and say Jeff, I don't think this is appropriate that you wrote "Bite Me" to this guy. I look at them and I go, well that's who I am. The guy said something very offensive, he had no right to say it, I'm sorry. They say well please be nicer, so now I write "Please Bite Me".

How Kodak Got Its Mojo Back

There's no doubt that there's good news at Kodak these days. First quarter profits of 119 million dollars may not have wowed Wall Street, but it certainly bodes well for the digital transformation underway at a company whose revenues were primarily film just a mere five years ago. For Hayzlett - the 'mojo' is about getting the brand re-aligned with the passion of capturing emotions and sharing them. "It's just we've finally been able to change the mood," says Hayzlett. "If you change the mood in any business, you can be successful. That's my opinion. Or at least if you're not successful, you're having fun just going down. So at least do that. You know? And I think most companies, their best days are ahead of them not behind them. And if you think of it from that perspective, you can do different things."

The Fortune 500 CMO says the secret sauce is in sharing: ideas, conversations, even company secrets. "When we developed a social media policy in the company, I said, "'Share 'em.' Some folks thought those were internal documents. I said 'share 'em,'" said Hayzlett. "It's like a nuclear secret or something, or state secret from the United States Government, or Chinese Government? No, it's just a bunch of stuff about blogging, and Facebook, and Twitter. You know it's something we do. If we share it with people, then they'll talk about us and they'll say this is great, and look what they've done and these guys are leaders. I say, hey lets share, Lets be creative. Lets be innovative. Lets have some fun."

Hayzlett's book, The Mirror Test, is almost a social media experiment for the author. He's tweeting, speaking, blogging, and Facebooking the message of the book all across the social media universe. Working hard to be authentic, even if it puts him at odds with his image as a big time CMO from time to time. "Somebody said 'I bought your book and it's so exciting I'm buying it again for other people.' And he said 'I'm stoked', remembers Hayzlett. So I said, 'Not only am I stoked, I just wet myself.' Somebody wrote back you shouldn't tweet that. Well that's me, that's who I am. So what you see reflective of a major CMO of a major company is that I'm just me. So why not be me and I think if you're anything else than that, I think quite frankly online, and Twitter, and Facebook, and social media, you're uncovered pretty quick."

You can view the video of this entire interview on CurationNation.org