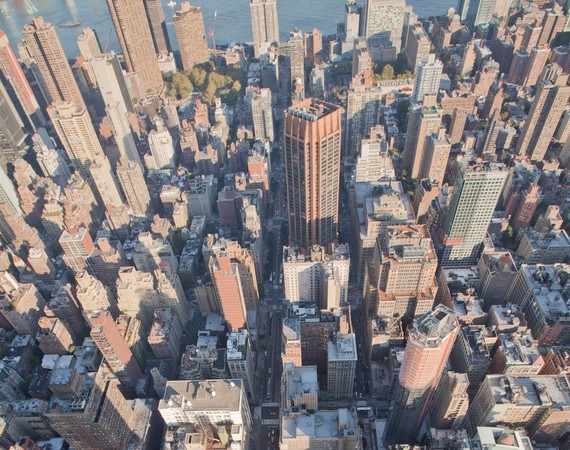 Sustainable urbanization isn't a term that rolls off the tongue. Say it three times fast and you'll see what I mean. But if you care about food waste like I do, it's definitely a term you should know.

Sustainable urbanization is so intimately tied to food waste that you can't talk about one without the other. If we don't get it right, we might miss the most sustainable opportunity to feed our growing planet. In fact, getting the food we already grow and produce today onto people's plates instead of the one-third or more that's lost or thrown away could feed everyone that suffers from hunger.

But What Happens as Urbanization Continues at a Historic Pace?
The world's population has grown to more than 7 billion today and is on a trajectory to surpass 9 billion by 2050. Cities, in particular, are absorbing this growth and experiencing rapid change. Today, about half of the world's population lives in an urban area; by 2050, two-thirds is expected to do so. That's called "urbanization," and we've never seen this happen before.

Urbanization represents an unprecedented transformation that brings with it significant challenges, including increased demands on the environment and natural resources. Bigger cities will require more buildings -- and buildings already consume 40% of the world's energy. As the world's population increases and urban centers grow, so too will the need for travel between them to connect our cultures and economies. Keep in mind that 80% of today's population has never set foot on an airplane. Fortunately, technologies are in place to help meet our sustainability goals in buildings and transportation but are not widely adopted for our food supply.

As more people move to cities, they move farther away from their food sources. This challenge has yet to be recognized on a global scale. It can be difficult to grow our own food in an urban environment. So getting greater amounts of fresh, nutrient-rich food to large urban areas -- while minimizing spoilage in transit -- becomes essential. This is where sustainability plays an important role in securing the future of food for all of us.

What's So Different About a City?
There's a confluence of issues and scale humanity has not seen before. At a basic level, when people move from rural areas to cities, there are just as many mouths to feed but fewer people producing food. When 180,000 people move to cities every day, the balance shifts quickly and dramatically. At the same time, the overall population is expected to grow by almost 35% in just 35 years.

Sustain the Cold Chain
The transport of perishable products across the globe -- the global "cold chain" -- may not come up in your everyday conversation, especially if you live in a developed country like the United States. But we live today in a global food system and supply chains are growing longer and longer. At the same time, less than 10% of the world's perishable foods are refrigerated, meaning more food loss occurs as supply chains extend to feed our cities.

Healthy cities naturally embrace locally produced foods and robust linkages between rural and urban settings. They place a premium on nutritious produce, some of which can be grown in urban gardens, but much of which is dependent on being brought into our cities via an effective cold chain. As the cold chain becomes more sustainable with technologies that lower greenhouse gas emissions, and expands to regions that need it most, we can reduce food waste, which means we can feed more people and reduce food waste's expansive carbon footprint.

And here's why the cold chain is the key to sustainable urbanization: We grow and produce enough food to feed 10 billion people, 3 billion more than inhabit our planet today. Yet, only about 6 billion people are getting enough food to eat. That 40% inefficiency is in reality our greatest opportunity. The enormous amount of food we waste every day is the hidden source that can sustainably feed our growing and urbanizing planet. Let's recognize it as the resource it can be.