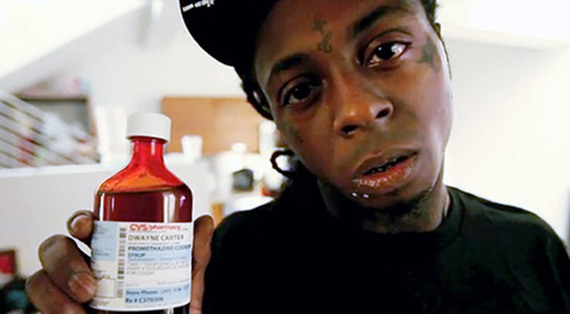 "I don't care if it was heroin in my cup, it's in MY cup" said Lil Wayne in a 2009 interview for Behind the Music. Lil Wayne was being confronted about his abusive use of "lean" also known as codeine; to a Lil Wayne fan, it's apparent that Wayne abuses lean, to others they think it's what makes him, him. Lean has defined his career from it's humble beginnings, in a perplexing way, Wayne doesn't see lean as poisonous nor dangerous. He has been dependent on it for years, stating in his song "I Feel Like Dying" how he felt without it,Jumpin' off a mountain into a sea of codeine/I'm at the top of the top but still I climb/And if I should ever fall the ground will then turn to wine/Pop-pop, pop-pop I feel like flyin'/Then I feel like fryin' then I feel like dyin'.

The seizure he suffered last night, two times is part of a series of seizures he has suffered throughout the years, due to lean--most notably in 2009 and 2013. Lean is killing Hip-hop literally with legends like DJ Screw and Pimp C dying from this deadly drug known as syrup,dirty Sprite,purple and an abundance of other street names. When mixed with alcohol and other drugs, lean is deadly. Rappers like Future praise this drink not realizing he is influencing a herd of followers to consume it. Who knew one drink could kill Hip-hop.

In 2007, Hip-Hop legend Pimp C died. He was ½ of UGK along with Bun B. UGK has been active since the 90's and are responsible for bringing southern Hip-hop to the forefront. Respectively without them, southern Hip-hop would not have gotten a wider scope as it now does. They're responsible for Paul Wall and Mike Jones--just to name a few amongst a long list. They made 'riding dirty' a popular phrase long before Chamillionaire made it a chart success, and ironically they made lean apart of southern Hip-hop culture. UGK doesn't get the credit they deserve when spoken about in rap circles, we at times look at the Biggie's and the Tupac's but UGK had a massive hand in globalizing southern music. In 1993, they released their album Super Tight which made the Billboard top 200, a feat at the time made exclusively to east coast or west coast rappers who were dominating the charts. Think Biggie, Tupac, Dr.Dre and Snoop Dogg. Their third album Riding Dirty would go on to peak at #15. After their third album, UGK decided to take a break. They returned back in 2000 with the smash hit "Big Pimpin" with Jay-Z, this east coast meets dirty south record was the song of the summer. A nice laid back song to start any party. It put UGK on the map and to the forefront. It would be 7 years before they saw another hit, and 7 years before heaven and hell collided. In 2007, International Player's Anthem was released and it immediately became a classic; it featured southern pioneers Outkast. The song was nominated for a Grammy and was ranked #10 on Rolling Stone's best songs of 2007. Surely, it was a time to celebrate for UGK, this song is still a favorite for many people. Celebration came to a halt later that year in December when Pimp C died of an overdose due to lean. Suddenly the world stopped, at just age 33 Pimp C was found dead; UGK still had a lot to accomplish in the rap world and beyond. UGK has influenced many people in Hip-hop from Drake to Big Sean and Big K.R.I.T who makes it a priority to always show love to UGK. Recently Pimp C was featured on "Faithful, a song on Drake's Views album. This featured has created renewed interest in Pimp C to a new audience. Pimp C left a great legacy behind as a southern Hip-hop pioneer.

One of the most popular DJ techniques in Hip hop is chopped and screwed. Both professionals and amateur DJ usually screw their music. This style can be attributed to the screw king himself, DJ Screw. "The Originator" as many called him. Created in Houston, Texas, screw music didn't see success until 2005. 5 years after the death of DJ Screw. On November 13,2000 DJ Screw was found dead in his Houston recording studio. As coincidence would have it, he died from a mix of codeine and other drugs. DJ Screw did not see world-wide fame, only posthumously. Screw is a legend in Houston. Screw music saw its rise in 2004, when many of DJ Screw's crew rose to prominence---one of the members of the crew was UGK. While many of his crew members grew to acquire major label success, Screw remained underground and only known to Houston. Until 2004's "Still Tripping" a collaboration between Texas natives Mike Jones and Slim Thug-- this song saw chart success and put screw music on the map.

Present day, screw music has been popular in Hip-hop and beyond with artist like Juicy J, Justin Timberlake, A$AP Rocky, Justin Bieber and as always, Drake who has an affinity for Houston culture. They have all sampled this Houston sound. DJ Screw's slowed down sound has vastly surpassed its humble beginnings in Houston. We still have many of his tapes but if he was still alive, he could have created even more music. "A lot of what we're doing in hip-hop is just our version of what other people have already done, but he's one of the few people in hip-hop culture who could say that he created something that never existed before him." Said Bun B in an interview with Billboard. Rapper straw Da Truth calls DJ Screw "the backbone of the south" without him, a lot of rappers from Texas wouldn't have had careers.

Due to lean, that part of Hip-hop died, although screw lives forever, much of the sound died with DJ Screw.
A$AP Yams wasn't a rapper, nor a DJ. He was Yams and that in itself was good enough for everyone. He didn't need to do the extras. He was a friend, a guide and a real cool dude. Yams was apart of the collective A$AP, a group composed of A$AP Rocky and A$AP Ferg. Both these artist have seen international success as rappers. The A$AP collective is more than just music, they're culture. Rocky has became a staple in fashion, having covers in Vogue and even walking Paris runway shows. Who is behind of all of this exactly? It was Yams.Without Yams, A$AP would not have seen the success it has seen.he was responsible for the approach and the look. He decided to mix high fashion with southern rap with a bit of a New York appeal. That formula has resulted in hundreds of thousands of records sold. Yams studied the game, and worked quietly. He was more known for his outlandishly funny tweets and just being a carefree guy. Many didn't notice his hard work ethic, at just sixteen he landed an internship with Diplomat Records. At this time he was also managing artist and sold mixtapes. He has dreams of building his own brand. And at seventeen, he inked his vision down, literally by getting a tattoo that said A$AP, he wanted to put his vision into stone by writing it. As destiny would have it, it worked. To develop Rocky, he scoured every hip-hop scene to cleverly mesh all of it into one, sounds from different regions. Much of the success he saw could be attributed to social media such as Tumblr, where he showcased up and coming rappers for the hipster underground. Through all of his success, Yams still had dreams of becoming an executive like Dame and Irv. On January 28,2015; it was released that Yams had died due to lean and xanax at just the age of 26. "He always had a struggle with drugs," A$ap Rocky said. "That was his thing." Lean is addictive and deadly. But why do so many artist still glorify it?

Future has made a career on promoting lean; with mixtapes such as Dirty Sprite 1 and 2. It seems like lean is the blueprint for his career-- many even credit lean for the popularity of his music. On "Slave Master," a song from Dirty Sprite 2, Future says, "Long live ASAP Yams, I'm on that codeine right now." A haunting parallel to ASAP Yam's death.Future talks about the drug poetically with such clarity and admiration. You can commonly hear him saying many times in his music, "i'm in love with that dirty". We can conclude he loves lean more than anything. Future openly raps about his dangerous addiction, but some how we ignore it when it's rapped over fire beats. In turn this creates this notion that lean is harmless.In an interview after the death of Pimp C, Bun B of UGK said,"Anyone out there thinking about sippin' syrup or currently abusing syrup, [you] may want to take very a good look at yourself, a long look at yourself." He continued, "I think it's gonna start affecting the personal lives of a lot of artists."Lean has become apart of Hip-hop culture and it doesn't seem like it will be going anywhere soon. We keep losing legends, as we lose legends new artist spring up and continue to promote the use of this drug. Lil Wayne is a living legend that we might one day lose to this drug. We talk about sipping lean but when it comes to the deaths from lean how come we don't acknowledge that? Rappers continue to sip from styrofoam cups until they either pass or pass out. Lean is a bigger issue in Hip-hop-- we need to address it before it kills Hip-hop even more.