WASHINGTON -- The federal government could save as much $13.7 billion annually if it were to legalize marijuana, according to a paper by Harvard economist Jeffrey Miron.

More than half of the savings, $7.7 billion, would come from not having to enforce the current prohibitions against the drug, while an additional $6 billion per year would come from taxing marijuana at rates similar to tobacco and alcohol. Since the paper was first published in 2005, more than 300 economists, including three Nobel laureates, have signed a petition to call attention to the work and initiate a debate among people on both sides of the issue.

"At a minimum, this debate will force advocates of current policy to show that prohibition has benefits sufficient to justify the cost to taxpayers, foregone tax revenues, and numerous ancillary consequences that result from marijuana prohibition," the petition says.

While the savings are still minimal when compared to a $1.3 trillion federal deficit, many public officials have used an economic argument to promote pot legalization, including Democratic State Assemblyman Tom Ammiano from California, who in 2009 argued that legalization would provide billions of dollars in much-needed revenue to the state. Known as Proposition 19, the ballot proposition ultimately went down to defeat in 2010.

Miron, for his part, says the savings are the least of the arguments for legalization, since the government has no clear reason to want to reduce marijuana consumption in the first place. "If you take that as a given," he told HuffPost, "that they're spending money to accomplish something you shouldn't have wanted to accomplish in the first place -- then that's pretty idiotic. 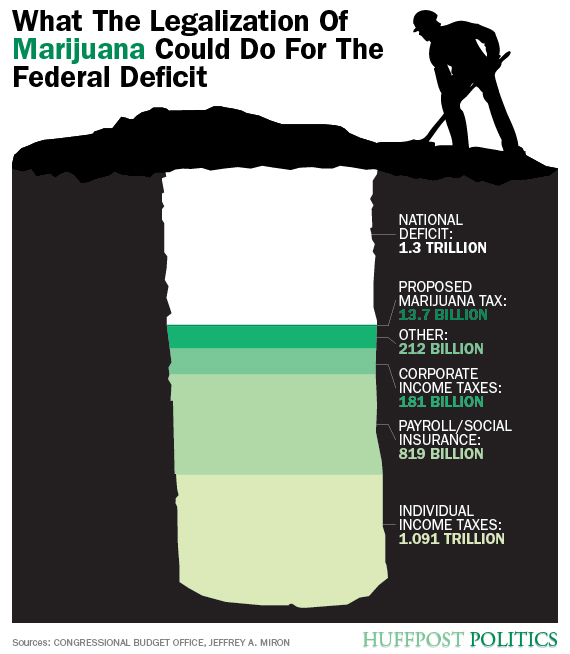