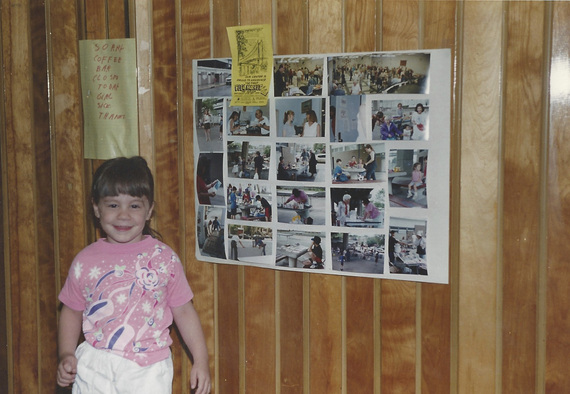 There are very few things I remember from my childhood.

One being the time my 6-year-old self, with both doe eyes fixed on the television, took a long-winded sip from my mother's lukewarm Coors Light instead of my own Happy Meal Sprite. (Why she had a straw in her beer is something neither of us ever figured out.)

Apparently I wasn't a fan.

Another, the scarring moment 4-year-old me plummeted to the ground off a set of presumably high-end, Bermudian monkey bars. Later in life, my mother would say with a straight face, "I can't believe that's all you remember from that fucking trip."

Apparently it was a nice one.

A third, in elementary school, when my mother confiscated my brand new Looney Tunes pencil case after discovering that I'd reported her to D.A.R.E. informants because she smoked Marlboros, not marijuana.

Apparently those little baggies were for buttons.

One of the hardest parts about losing both parents has been losing the memories that went with them. The stories I would ask to hear over and over again at 13, but couldn't care less about come high school because I was a hormonal monster with a Myspace to manage.

The little things that only they took note of and either, A. never told me or, B. told me so long ago that it's been excommunicated to the dark chamber of my brain where Math B is stored.

The ones I'm interested in now more than ever.

A good friend of mine just started a blog called "From Russia, With Sarcasm." In it, she plans to detail every thoughtful/embarrassing/life-molding moment from her immigrant childhood (and her parents' coinciding immigrant parenthood) -- a conquest, I admit, I am equal parts fond and jealous of.

Sure, there are the anecdotes that stuck -- like how, to keep this pint-sized human off the couch, my mother would simply lay down the vacuum (a household object, I'm told, I was terribly afraid of), or how, come hell or high water, I would try and stick my tiny hands in the VCR (a household object I apparently was not).

Though, there will always be gaps.

There will always be gray areas because there will always be stories, whether proclaimed at dinner parties or published for the world to see, that haven't been properly fact checked -- some filled with unintentionally stretched versions of the truth (was Mom a Grateful-Deadhead or did I dream that?) and others with sentences that could always be better.

Sentences that would benefit from said little things.

Take this piece, for example.

When did Mom first learn I was paralyzed by the vacuum?

Was I alarmed by any other inanimate objects?

Did I shriek in fear or lay fetal on the floor?

For a writer, these details (or the lack thereof) can make or break a good piece. And, for someone still grieving, the missing pieces are just another reminder of how real a loss is.

So, like us writers usually do, we improvise (just like us grievers do with things like inherited debt and all that dreadful funeral paperwork we never knew existed).

It was probably an accident, and she probably laugh-cried.

I was definitely wary of the George Foreman grill.

If I was then, like I am now, fetal. Definitely fetal.

It's all any of us can ever do.

More:
healthy livingHumorwritingpersonaldeath and dying
Newsletter Sign Up
The essential guide to taking care of your mind and body
Subscribe to HuffPost’s wellness email
Successfully Subscribed!
Wellness delivered to your inbox