The traces of ancient corn farms could reveal how many people lived in a legendary Maya city, a new study suggests.

The pyramid-filled Maya site of Tikal in Guatemala is one of the largest archaeological complexes in Central America. The vast city-state had a long run, flourishing from roughly 600 B.C. until A.D. 900 when the Maya civilization mysteriously collapsed. A group of scientists recently revisited the site, not to hunt for lost treasures or artifacts, but to look for clues in the soil chemistry that might reveal the population of Tikal in its prime.

"Dirt analysis may not be as sexy as digging up a jade mask from a former Maya king, but now we can answer more questions about the regular people that made up this ancient civilization," study researcher Chris Balzotti, a graduate student at Brigham Young University (BYU), said in a statement. [See Images of the Expedition to Tikal]

Estimates vary, but there were thought to be between 30,000 and 60,000, or possibly up to 100,000 people living in Tikal at its height. Feeding that many people would have required a robust system of agriculture. 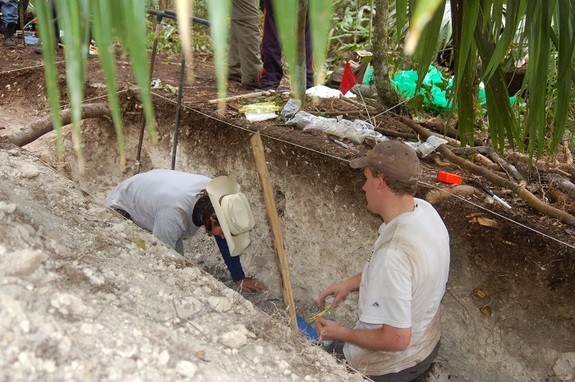 To investigate where the Maya did their heaviest farming around Tikal, Balzotti and fellow researchers looked for signatures of corn in the carbon isotopes (carbon atoms with different molecular weights) of 185 soil cores. Then, they used satellite imagery to map the areas that produced the most crops for the Maya.

Many archeologists have assumed the Maya primarily grew corn, or maize, on the hillsides around Tikal, much like the region's modern inhabitants do. But the BYU-led team found little maize residue in the fertile upland soils. Instead, the farming hotspots seemed to reside in the deep soil zones near the wetlands, called bajos.

"Our soil analysis is finding that Mayas did not grow maize heavily on the hillsides, but rather along the borders of the low-lying wetlands called bajos," BYU soil scientist Richard Terry said in a statement. "Knowing where they grew corn gives us a clearer picture about their civilization unknown until now."

That information could help archaeologists make better estimates for how many people Tikal could have supported, the researchers say.

The findings also shed light on how the Maya managed their rain forests. Scientists have disagreed about whether the Maya cleared the forests for agriculture or grew crops beneath the canopy. The BYU team found evidence that the ancient people practiced a mixture of both.

The research is detailed in the International Journal of Remote Sensing.

How Many Mayans Were There? Tikal Corn Farms May Reveal Population Of Ancient City
Maya Ruins