Palo Alto-based systems analyst John Felleman, a student of electoral college quirks, has created a statistical scenario wherein a candidate is rejected by 78% of voters and still gains the Oval Office (see table 1, below).

"Granted, the vote distributions are a bit far-fetched," Felleman says. "But even more believable scenarios show how you can win the presidency by exploiting the electoral college."

Felleman shows (in table 2) how, with just 47% of the popular vote, John McCain could very well collect 271 electoral votes and win next Tuesday (victory requires a minimum of 270). Felleman has used current polling numbers with three plausible variables:

Such an outcome would hardly be unprecedented. Remember Richard Nixon's demolition of Hubert Humphrey in 1968, 301 electoral votes to 191? In that election Nixon received 511,944 more popular votes than Humphrey, a margin of victory of less than one percent.

And then there was 2000, where (in the event you're new to Earth) the winning candidate received 543,816 less popular votes than the loser.

1969's proposed Bay-Celler Amendment required the winning team to garner at least 40% of the popular vote. The measure died at the hands of small-state conservatives--Democrats as well as Republicans--who felt it would truncate their states' influence.

Had the founding fathers been equipped with PDAs with algorithmic calculation features to account for trends in modern population density and political dynamics, perhaps the Constitution would have offered a more balanced solution.

There's no time like the present to reflect on a system that allows a candidate to gain office regardless of the popular will.

The Huffington Post is officially open to proposed alternatives. 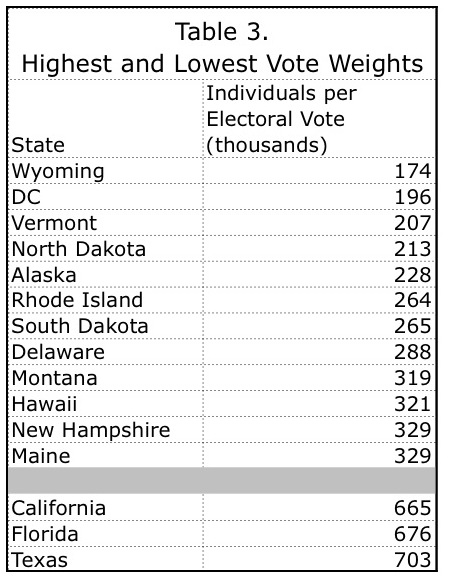