Now that Donald and Melania Trump are moving into The White House, our next first lady is sounding more confident and relaxed than during the presidential campaign. In her first post-election interview with Lesley Stahl on 60 Minutes, Melania Trump said she will be fine, "I will stay true to myself."

When Melania Trump first entered the political arena, I was like many Americans. In July, I was appalled by her plagiarism of Michelle Obama's 2008 Democratic National Convention speech. I didn't think someone who lives in an "ivory tower" could represent the future of American women--our hopes and dreams--with any sense of real purpose.

But doubters must now become optimists. 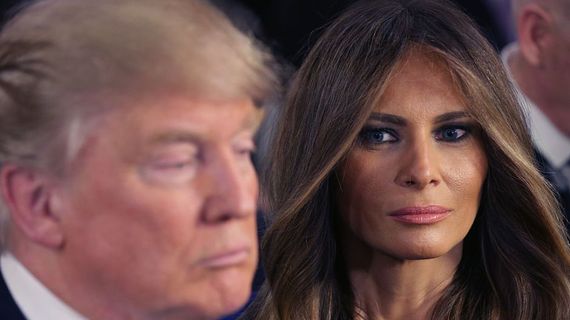 Melania Trump will be our next first lady and she has a coveted opportunity to make a difference. It's fair to say that the handful of women who may legitimately put "FLOTUS" on their resumes have more potential power to affect real change than any female celebrity or monarch in the world, regardless of their popularity on social media. Change in gender equality in the workplace and society. Change that supports our eternal quest to balance marriage, motherhood, and professional progress in a man's world.

Somehow the female form, especially when it's model-perfect like Melania's, can't be ignored. The body either brings attention to women's beauty or keeps us stuck in a singularly sexist world. The trick for women is to use their sexuality strategically, and oh boy, we do.

Remember the 1958 photo of actress Sophia Loren casting a disapproving eye at Jayne Mansfield's exposed breasts at a Beverly Hills party? Loren told Vanity Fair that she was worried Mansfield's nipples would fall out of the low cut dress. Curious factoid: Mansfield was featured in a pinup magazine, "Jayne Mansfield for President: The White House or Bust" in 1964, once listed on eBay for $99.99.

Then there was Jennifer Lopez in her famous green Versace silk chiffon dress at the 2000 Grammy Awards. That dress probably launched the now ubiquitous use of "boob tape." And today, you see plunging necklines diving down to the belly on every red carpet.

In the '60s women burned their bras to feel empowered and equal. And guess what? Men were just fine with the braless look. Last year, Playboy eliminated nude photos; the move was not a show of respect for women but to disrupt its outdated business model, according to Fortune.

The voters see nude photos of Mrs. Trump and they appear more scintillating than scandalous. I teased on Facebook whether Melania will be able to wear high neck collars for the next four years. But why should she?

Women have learned that we can celebrate our bodies instead of covering them up. The question is, how do we use that female prowess to gain power and a voice not measured solely by physical appearance? How do we become more than sex objects, be taken serious, and ultimately, create a better world?

Ironically, dressing smart may be the precursor to gaining a reputation as being smart, valuable and perhaps, a new kind of Washington heavyweight. The New York Times recently recounted the list of top designers and magazine editors who had planned on a Hillary Clinton administration--Diane von Furstenberg, Tory Burch, Marc Jacobs, Elie Tahari, and Ralph Lauren. Plus, Vogue editor Anna Wintour and W magazine's Stefano Tonchi.

On election night when Melania wore a Ralph Lauren white jumpsuit baring one shoulder, her sleek statuesque image said volumes: I will be tasteful but exercise the beauty of being a woman.

No doubt, fashion gazers will be closely scrutinizing the first lady's choices over the next four years. Work it, Melania!

Don't be fooled, Melania is smarter than we give her credit for and while Trump may be a hot head, Melania has calculated her ascent very carefully. So far her formal interviews have been less than impressive but she is no dummy. She made her way to the United States and inserted herself into a life of luxury and privilege. Now she can help women embrace their beauty, sexuality, and intellect if she lets America (and people around the globe) hear her genuine voice.

Up to now, Melania voice has sounded more like Donald's echo. We only hear his rhetoric. We only see her as a former model and an entitled businessman's wife. As an ambitious human being, Melania also harbors a keen third dimension and now she inherited one of the world's most powerful platforms.

This is about Melania taking a risk and making her voice resonate throughout the land with authenticity, conviction, and what's good for women and men nationwide.

In my career as a broadcast journalist, physical looks mattered. If the news director needed to see a face of a certain color or gender, the quality of one's work might take a backseat in the hiring process. We can't necessarily change others' opinions and approaches but in any setting, we all have the power to demonstrate our value and choose how we will apply our gifts to make the world a better place.

Melania says she wants to combat cyberbullying. What does that encompass? It's more than a slogan. It's about creating an America where people of all cultures and religious persuasions fight for their beliefs while respecting those who differ.

Create a true and inclusive dialogue and you've got this, Melania. Don't listen to the advisers. Don't listen to The Donald. Listen to your heart. It's always worked for me because you can always trust and rely on yourself, especially in a place like Washington D.C.

The good news: Melania may already know that. She told Stahl, "I'm very strong and um--tough and confident. And I will listen myself and I will do what is right and what feels to my heart."