When undergoing my first beauty-related social experiment, I noticed that guys had a lot to say about my appearance. Whether it be asking about my health or wondering if my makeup was intended for weekend partying, the dudes that I encountered made their opinions known when it came to my face. Most of the comments made towards me were made out of good-intentioned concern, but nonetheless it struck me as intriguing that men (and everyone, really) had so much to say about the way that I look. This interesting development inspired me to further my research into the social perception of beauty. If they felt so comfortable approaching me about my looks in a platonic setting, how might guys react to my different levels of makeup when engaging in a potentially romantic scenario?

To gauge the different reactions to makeup by guys in romantic scenarios, I decided to sign up for Tinder. Having dated my boyfriend for many years now, I've never had to brave the frightening world of Internet dating... I had no clue what I was getting into! I had a friend show me the ropes before creating three nearly identical accounts, only changing their respective photos to match "no makeup," "average makeup," and "heavy makeup."

As many of you know, on Tinder you cannot view any reciprocated likes (matches) until you indicate your interest in that person by swiping to the right. So, when planning my experiment, I decided to swipe right for the first 100 suggested matches per account, then allow one hour afterward to see what kind of messages and matches it turned up. I then counted the reciprocated likes, messages and ages of my matches to see any general trends when it came to my level of cosmetic "enhancement."

I chose the most normal no makeup photos from my Facebook profile, then set out to see how guys reacted to me. Once I started seeing the messages roll in, it was surprising to me how friendly they were; guys asked me how my day was going, what my favorite movie was and told me that I had a nice smile. A lot of the messages mentioned that I was "cool," or "cute." They mostly seemed focused on my interests, personality and everyday experiences. 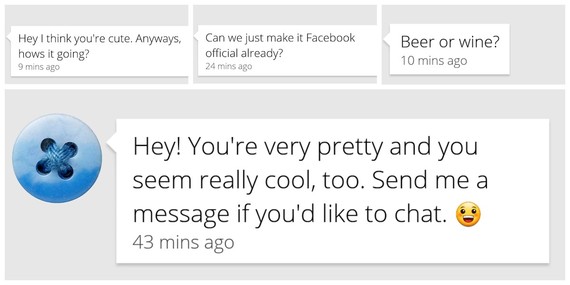 I chose normal Facebook photos of me in regular makeup for this account, keeping all of my information the same as what was on my no-makeup account. For this portion of the experiment, however, I had a completely different experience. The first message that rolled in during the hour was so graphic that it made me (and my friends) squirm, and many of the subsequent messages that I received were more focused on my appearance than I'd gotten without makeup. There were still plenty of nice guys who asked how I was doing, but there was an overwhelming shift into telling me that I was good-looking and wanting to meet up right away.

As with the previous accounts, I chose the most normal Facebook photos in which I was wearing heavy makeup. Since full, Beyoncé-style dark eyes are not a typical part of my beauty regimen, this meant that my heavy makeup photos each showed me in a different color of lipstick with enhanced eyebrows. The most surprising development in this portion of the Tinder experiment was how many men complimented my style and makeup. There were fewer comments on my appearance in this portion of the experiment than during the regular makeup, and the guys were certainly more civil. I had expected that because this was the account in which I was most made up, and this portion of the experiment was also taking place latest in the day, guys would be more pushy and graphic in their approach. I was pleasantly surprised with the outcome. 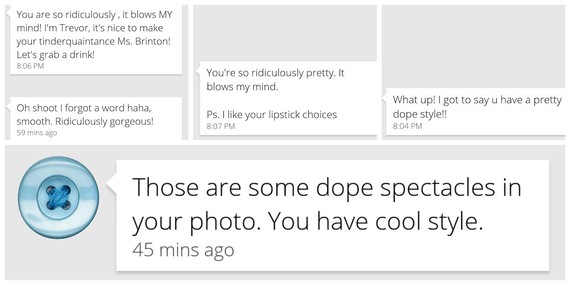 This experiment really opened my eyes to a lot of things. Internet dating/hook-ups are a whole new world to me, and I doubt I’ll ever partake in the scene again -- I’m in a happy relationship, and I encountered far too many incorrect uses of “your” to ever feel comfortable picking a potential partner online. Despite my reservations about the entire concept, however, the guys on Tinder surprised me. More men flocked to a bare-faced girl than a heavily made up one, yet they seemed most aggressively interested in a face adorned in average levels of makeup. Their language seemed to reflect what they thought of the woman behind the makeup, treating my bare-faced account as a friend before a hook-up. While it’s unfortunate to me that many of these men treated a woman as more sexualized because of her cosmetics, their cordiality in most of the messages was refreshing. While the negative standouts among these Tinder-dudes seemed to possess an antiquated mindset that a woman’s makeup/clothing reflects her sexual willingness, most of the other guys seemed as respectable in their pursuit of a date as one can, given that the app exists to judge based on appearances.