When Larry Ellison, Bob Miner, and Ed Oates founded Oracle in 1977 their impetus for creating a company was relatively simple: they wanted to take advantage of a technology in the marketplace that no one was else was commercializing. No one could have guessed that the relational database prototype they developed, and the company they formed around it, would change the landscape of business computing forever.

Nearly 40 decades later companies who are heavily invested in Enterprise Software are taking a huge share of worldwide software revenue as a whole, which Gartner, Inc. totaled to be at $407.3 billion back in 2013. The chart below, taken from that same study, shows the top 10 software companies by revenue. 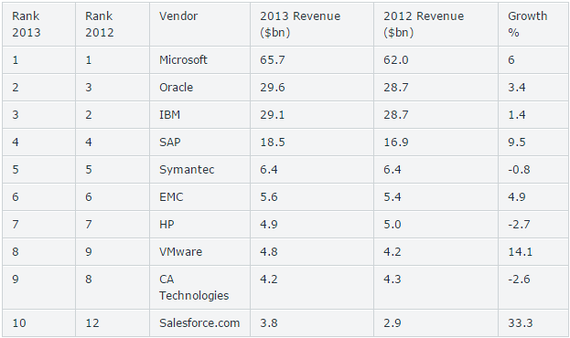 Care to take a guess at what common trait can be found in each of these companies, besides, of course, the sky scraper sized shadows they cast over the tech industry? Each of them was founded before 2000, which also means that the key individuals at the helm of every behemoth company on Gartner's list is either a product of the Baby Boomer Generation, or of Generation X. What's more is that the office spaces of these companies are undoubtedly starting to overflow with another generation of workers, the Millennials. Just one look at Kleiner Perkins Caufield & Byers workforce infographic--taken from last month's internet trends conference (the slide show of which can be found here) tells a pretty solid story of where the country's work force is headed. 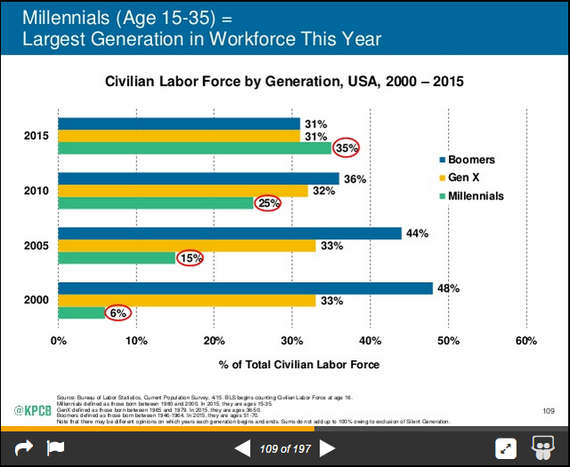 However, while the rate at which Millennials are taking over the work force is a compelling story in and of itself, a more telling statement, which Merrill Lynch published in their most recent Thematic Investing Report (which can be found by heading to Business Insider and clicking on the link), is that technology is the number one entry point for investors wanting to tailor their investing strategy to Millennial themes (the report gives a detailed list of 8 possible entry points total). This should come as no surprise. What is surprising, however, is the types of changes that we're seeing in Enterprise Software Engineering that are directly related to Millennial influence.

But before diving into the changes that we're seeing today, let's briefly go back to the founding of Oracle. Relational database software was originally created because Ellison and the rest of Oracle's founders saw an opening in the market that no one else was taking advantage of. In other words, Oracle was founded on the basis that databases could be more effective and more user friendly than the hierarchical and network databases that were previously being used to store customer data. Similarly, Salesforce.com, the youngest company on Gartner's top 10 list, didn't invent CRM Software, but they were the first Enterprise Software developers to operate entirely on the Cloud. The common lightning rod between companies like Oracle, Salesforce, and most other Enterprise Software businesses is the question of, "how can we make existing technologies better."
Enter the Millennial generation. A key driver in tech companies either created by or largely run by Millennials is not a question of how to make existing technologies better, it's a question of how to make the next big thing that people want to use.

With the advent of deeper communication channels brought to us by social media, large corporations have become much more transparent to their consumer base--and as a result businesses are under a greater amount of pressure to deliver products that align with their constituents' expectations and beliefs. In his recent Wired article about how Millennials are changing product development for Mathieu Turpault writes:

"What most of the analysts I've read don't get is that millennials are the first generation to truly live by its own set of consumer and business rules. As consumers, they expect the brands they follow to share their principles (much as Gen X and Boomers did before them). But as entrepreneurs, they're also able to deliver on it."

And herein lies what I believe to be the biggest way in which millennials are impacting the Enterprise Software Business. Historically, and justifiably, enterprise software hasn't been a sexy vehicle for anyone to drive. If company's like Google and Apple are Teslas, then company's like Oracle and Salesforce are Priuses. They get the job done, they make our lives better in the process, but at the end of the day, no one goes home and day dreams about how they can rev the engine of a cloud based computing system--well, most people don't anyways.

But that's precisely where things are changing. With Google and Apple making bigger strides to compete with Microsoft in the Enterprise space, and with companies like Slack (which recently reached a 2.8 billion dollar valuation) showing consumers and investors alike that workplace software can adopt the same types of fun and innovative modes of social communication that people use in their personal lives, we're seeing just the beginnings of how the Enterprise Software Business will be perceived in the years to come, and Millennials are the key drivers behind this growth.