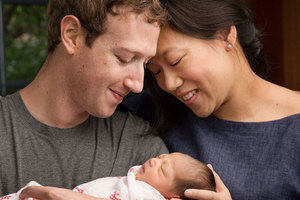 This week, famed Millennials and dual-career couple Dr. Priscilla Chan and Mark Zuckerberg did three extraordinary things. First, Priscilla gave birth to the couple's first child, daughter Max. Second, Mark began a two-month paternity leave which is highly unusual, to say the least, for the CEO of a blockbuster Silicon Valley company. And third, Chan and Zuckerberg committed to giving away 99% of their Facebook stock over their lifetime, currently valued at $45 billion.

I suppose looked at in order, each action might be seen as more extraordinary than the last ... many couples have children, very few CEO's take a two-month paternity leave, and virtually no one has ever given away such a sum. But I find newborns one of life's great miracles. (And having three Millennial children who aren't great at holding on to their money, I might be inclined at rank ordering these extraordinary acts differently than most.) However one ranks them, all are life changing for the Chan-Zuckerbergs and a reflection of the changing values that young people bring to the workplace. After all, this is the generation of dual-career couples, hands-on dads, and socially conscious young people, right?

In March of this year, I published a piece called Is it Time to Retire "Millennials"? questioning many of the stereotypes attached to this generation. I wondered how many of the assertions made about this group would pass the muster of rigorous research. So, we embarked on a new research study, with support from KPMG, to better understand this cohort. The research was conducted at five large US-based companies involved in the insurance, banking and financial services sectors. 1,100 Millennial-aged men and women participated.

We asked participants questions related to how they managed their careers: How do they search for their jobs? How do they define success? What are employers doing to assist young people in their development? What organizational characteristics are most likely to increase employee work-effort, retention and satisfaction?

There were many interesting findings, but here are some of the key takeaways:

Millennials are ambitious, and are willing to work for success. Career growth opportunities are rated at the very top of criteria for the selection of an employer. In our sample, 82% of young men and 71% of young women would like to advance to a position with greater influence on policy decisions and 74% of men and 67% of women expressed a strong desire to advance to a position in senior management in their very large companies. And they were willing to do the work to attain these positions. 82% wanted to take on increasingly challenging tasks and 80% said they are willing to put in a great deal of extra effort to help their employer be more successful.

... But not at the expense of their lives outside of work. The importance of "life over work" was reinforced by study participants. The majority (66%) clearly felt that their lives outside of work were much more important to their sense of identity than their careers. 23% of participants indicated that life and work were equally important. Although a very high percentage of respondents want to advance up the career ladder, only 20% were willing to pursue this goal at the expense of time with their families and their personal lives.

Job loyalty still exists. Much has made of employee loyalty being a "thing of the past" and not a value held by most Millennials. The majority (60%) of the young adults said that they plan to stay in their jobs for some time and at a rate of more than 2-1, study participants believed that staying with their employers was a better advancement strategy than leaving their organizations.

Solid career navigation skills lead to greater job satisfaction. Participants who rated themselves higher on career navigation skills (e.g. they know what is important to them in their career, they know what skills they possess, they are able to set clear career goals and communicate those effectively) were more satisfied with their jobs. Those who were more satisfied with their jobs scored higher on work-effort and intention to stay with their employers, and also were happier with their lives overall.

Gender roles are continuing to shift. While the young men in our study were slightly more ambitious for advancement than the young women, the differences across gender are definitely diminishing. Perhaps one of the largest (and most surprising) gender differences we observed in the study was in response to the question, "Would you consider being an at-home parent if your spouse's income was adequate?" 51% of men indicated they would consider the stay-at-home option compared to 44% of women.

This is consistent with our prior research on "The New Dad" which indicates that today's fathers want to spend more time with their children, right from birth. It sounds like Mr. Zuckerberg won't be lacking for male company during his paternity leave! We hope that more companies will offer parental leave benefits as it is clear that both Millennial men and women place priority on their family and personal time and define success based on their ability to achieve work-life balance.


Dr. Brad Harrington is the Executive Director of the Boston College Center for Work & Family and a research professor in the Carroll School of Management at Boston College.