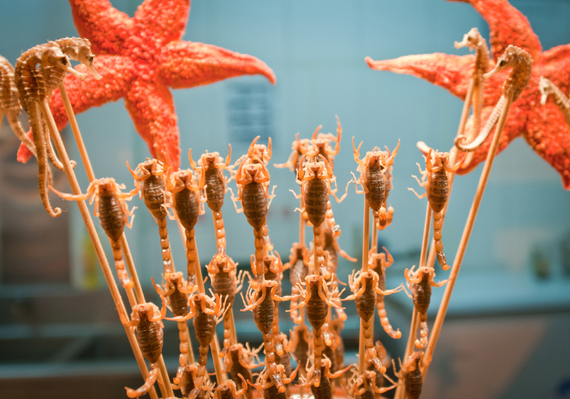 Would you like to try a fried scorpion on a stick? Take a moment and explore your initial gut reaction? Did you say to yourself, "Hum sounds interesting," or "No way!"

I recently went to China to celebrate a friend's 40th birthday, the amazing, adventurous Dr. Eric. For one week, Dr. Eric lead a group of eight Americans out of their comfort zone to mindfully experience an array of the unfamiliar (come back to read my upcoming series of articles about this trip to China!).

The group headed to what is known as a night market in Beijing, China. On first glance, the market appeared to be a crowded, lively bizarre lined with rows and rows of food stands. Step a little closer and you find an array of items that aren't traditionally labeled as food such as scorpions, snakes, silk worm cocoons, star fish, and sea horses. Yes. People eat this. It's safe to say that the items for sale were creatures that make most Americans on first blush say, "Ick!"

Our mission: to find scorpions, a delicacy in China. Scorpions can be cooked in many different ways -- roasted, fried, grilled or even consumed live. Fried scorpions have generally only popped up in the U.S. as shock value items at state fairs (scorpions have been voted Travel & Leisure's Strangest State Fair Snacks). Scorpions have stingers that aren't removed but are not poisonous when exposed to heat (double yickes!). Who knew their legs would be still moving even when skewered on a stick? It's pretty safe to say that Americans generally do not like to see their food move a second or two before they eat it.

Out of eight Americans, how many were willing to try the scorpion? Four. Watch the video showing four of our brave participants and see their candid responses. You'll notice uncomfortable giggles, grimacing, a little bit of trepidation and a whole lot of surprise. Can you guess what a scorpion would taste like? They answer this question hands down.

How willing are you to try a new food? Are you the first to say, "yes" to a new and exotic meal -- one from a different culture, a new fruit, or an unfamiliar spice. Even buying a different brand of your favorite cereal can feel wild and crazy sometimes. Maybe you stick close to your tried and true favorites, no deviation.

Most people are unlikely to try new things. In fact, we generally eat a limited scope of foods on a daily basis. Research indicates that we often tend to choose foods based on habits to minimize the cognitive effort we have to put into it. In our own antidotal discussion, everyone admitted to some repetitive food habits -- a brown sugar Pop Tart every morning, drinking out of a favorite coffee mug, snacking on Cliff bars daily at work, or grocery shopping every Thursday morning at Costco. Let's face it, we are creatures of habit. The new sounds exciting but it is actually more difficult than one would imagine to do something different.

Okay, so maybe eating a scorpion might be a little too much to ask of you. This is completely understandable. Why do we need to take a shot at novel foods? It's easy to get stuck in a habit or rut. When trying to change your eating, doing the same thing over and over again can make you spin your wheels. Also, diversity in your food palate exposes you to more vitamins and minerals that you may be missing if you only stick to a few of your favorite foods. For example, if you don't normally eat dairy, you might unknowingly be missing a healthy dose of vitamin D, which helps your bones. Also, vitamin D deficits have been linked to depression. Finally, it's just fun. There are some mindful tips that can help you to start eating new foods, whatever they maybe.

1) Be open minded. Each of the scorpion eaters had to seriously suspend their judgment. Too often we say "no" based on cognitive reasons. Basically, you think you won't like it. You've made your judgment before you've even tried it. Maybe you've have done the same thing with broccoli. You didn't like broccoli as a child so you won't even try it now. Make a deal with yourself. Decide after you've tried a new food. If you don't like it, don't touch it again. At least you've made a truly informed decision.

2) Open Up to Enjoyment: Before you try something new, remind yourself that you may actually like it. Change is hard. Even trying a new food can make you squirm a little and put on the emotional breaks. Actively and intentionally remind yourself that you might enjoy it. Even if you don't like the taste, you might enjoy the little high of excitement you might get from doing something outside the box. Sometimes we don't "like" something just because it is unfamiliar. Remember it can take approximately 20 exposures before acquiring a taste for a new food.

3) Close Your Eyes. Melissa, in the video, closed her eyes naturally. This action appeared to heighten the experience and the sensation. If you are going to eat something new, try out this technique. Close your eyes to help you fully experience the taste without mixing in visual cues that may steer you in a different direction. Consider that guacamole's greenish-brown color may not look very appealing to most but it tastes fantastic. Also, blind dining is a trendy new way restaurants are helping people experience more pleasure from food.

4) Let the Experience Linger: Melissa stated that she didn't swallow the scorpion at once. She kept it in her mouth for a moment. Often, we pop food into our mouths and swallow immediately. Let it loiter for a moment to get the full sensation.

5) Compare: We naturally compare what is foreign to what is known. In the video, the bystanders suggest options for comparison (ex. maybe the scorpion tasted like crickets, popcorn, or chicken). We know our experience often in relationship to others that are familiar. Take a moment and note how this new food is like and unlike things you have tried in the past. This can help you to establish whether it's worth eating again.

The next time you encounter a new food, try to do it mindfully. Be open minded, jump in and embrace new things. Even if you don't try a scorpion, feel free to try a healthy new snack or a new fruit. Eating something new can be one step toward helping you spring you out of old food ruts and unhealthy habits. Thank you to the brave participants for showing us the art of mindfully eating a scorpion!

Dr. Susan Albers is a psychologist and author of the new book, EatQ! She has been a guest on Dr. Oz and is frequently quoted in Shape magazine, Prevention, Fitness etc. www.eatq.com