Although the United States population has grown by 120 million people in the past fifty-odd years, today's new homes are selling at just half the pace they were in 1963.

Home sales are being dragged down by the weakness of the labor market and the number of Americans who have grown too discouraged to look for work, economists say. In previous recoveries, the housing market has sometimes buoyed the economy, creating new jobs and driving economic growth. This time, however, the housing market is now lagging behind.

Over at Mish's Global Economic Trend Analysis, a new chart helps bring employment into the housing story by comparing the ratio of annual new home sales to the size of the civilian labor force. See the chart below.

The point is simple: while the working age population is steadily rising, the size of the labor force is actually shrinking. And those Americans who have grown so discouraged that they have given up looking for work -- around 4.9 million as of last month -- are unlikely to be in the market for a house.

With construction for new homes all but coming to a halt in February, Americans are on track to buy fewer new homes than in any year since the government began keeping data almost a half-century ago.

Mish lays out the problems, as he sees it:

• Those not in the labor force are not looking

• Those unemployed are not looking

• Those afraid of losing their job are not looking

• Those in a house and underwater are not looking

• Those facing retirement may be looking to sell or downsize

• Mortgage standards are much tighter for those who are looking

Economists, however, are hard pressed to tie down the exact relationship between a slumping housing market and a weak labor market.

"It's very hard to zero-in in that way," said Bank of America-Merrill Lynch economist Michelle Meyer. "But one of the major components for why housing demand has remained very soft is because the labor market is very weak. And until we see that really changing, housing sales will continue to be soft."

The more significant problem, for Meyer, is how these two factors taken together -- housing and unemployment -- indicate an economy still in trouble.

"When you think about new home sales, and housing specifically, that obviously ties to what share of Americans are participating in the labor force," Meyer said. "But you can't really say that because the labor force shrunk by X amount there is this many fewer homes needed. To me, it's more of a signal that the fact that the labor force is weak. And that at this point in the recovery, people are still leaving the labor force -- that signals to me that the fundamentals are soft." 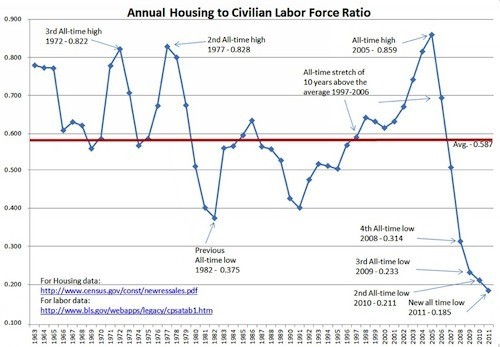