The most exclusive seat in New Orleans isn't at Commander's Palace, Cochon or Cafe du Monde. It's not at a table at all. It's on a pedestal up the front steps and to the left inside the Roosevelt Hotel at 123 Baronne Street. That's Mister Mike's seat. 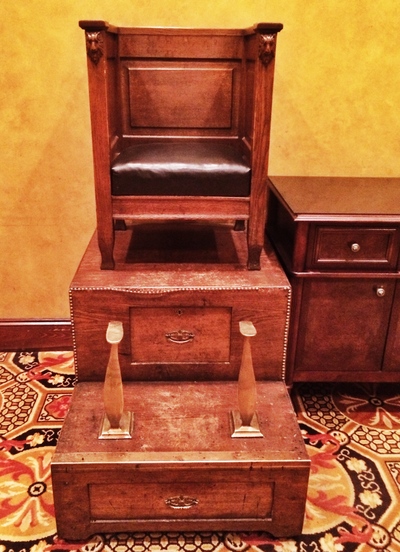 For visitors to the city, Mister Mike's hands may be more significant to their Cajun experience than Drew Brees'. Mister Mike is a 78-year-old shoe shiner, and until the summer of 2012 he'd never been out of Louisiana. He wanted to go to Hawaii, but his wife, Miss Carolyn, wanted to go to New York City.

A year earlier, a certain A-list celebrity (we'll call him Joey) spent months shooting a film in town, which meant multiple daily trips past Mister Mike's seat. Others have made the same walk without an acknowledgement, "but he was different," Mister Mike told me during black and brown shines on the Saturday afternoon of NBA All-Star Weekend.

After speaking with this star's manager to confirm this story, I agreed to not disclose his identity, and while the story may be better if you knew who it was, it's also nice to wonder.

"He would wave on his way out the door and then we started talking before he'd go to church... very nice man. I didn't know who he was, but I just enjoyed talking to him," Mister Mike recalled.

One day their chat turned to travel and Mister Mike didn't have much to contribute other than the dream of going to Hawaii. "Just like that, he said 'I'll send you to Hawaii. When do you want to go?'" Still not knowing anything but the first name of the man he was speaking with, but completely trusting him anyway, Mister Mike said he needed his wife of 28 years for that answer.

"The next day, when he stopped over here before leaving the hotel, I told him that my wife wanted to go to New York over the summer and he said that he'd take care of it."

Having lived in New York for nine years and hearing my share of nonsense, I couldn't believe that he trusted the offer.

Later that day, Mister Mike went to the store to get a film that I can't reveal in order to protect the name of his new friend. "The guy in the movie store said, 'Mike, you know he's shooting a movie here in town?' I looked at the cover and there he was... How about that?"

They saw each other the next day and Mister Mike apologized to him for not knowing who he was, to which the actor, as expected, shrugged and seemed to appreciate the anonymity. A few weeks after the film wrapped, Mister Mike got called to the front desk of The Roosevelt and received an envelope with his trip to New York City inside.

One night they went to a steakhouse where a reservation was made and the bill was already handled, just like everything else was that week. "That was the only time we ate in a restaurant there. We just went to the market around the corner from the hotel, got some food and ate in that park," he told me.

"Yes sir, that's the one that was next to the hotel."

And nobody goes to New York City without shopping, Mister Mike and Miss Carolyn included. "I did want to take the train places, but we had the limousine, so we told him where we wanted to go shopping. My wife got lots of fancy dresses, and everything was paid for... all those fancy dresses."

I assumed the limo took them to the stores on 5th Avenue that have the fancy dresses, so I asked which ones they went to.

"Walmart," Mister Mike replied. "Boy did she do well in there." 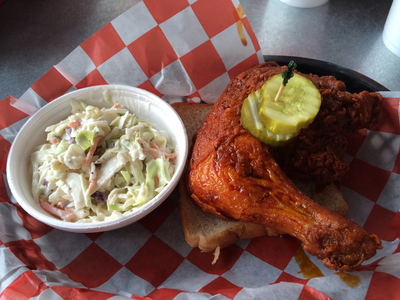 You've never had fried chicken like this, unless you've been to Hattie B's or Prince's. The skin is thicker and crispier than typical fried chicken and the cayenne pepper is the star. It's marinated in buttermilk and the thick cayenne sauce somehow makes its way into the chicken, making for flavorful and tender bites even if the skin doesn't make it onto your fork, or fingers. The small portion is still a sizable one with a leg and thigh on top of a piece of white bread that soaks up all the good stuff. The coleslaw was creamier than I usually like, but it worked here because of the balance with the cayenne and I did pour some of the vinegar from the black eyed pea salad into it. We ate upon arrival in Nashville at 11 and didn't eat again until dinner at 8. I suggest the same thing for your trip to Music City.