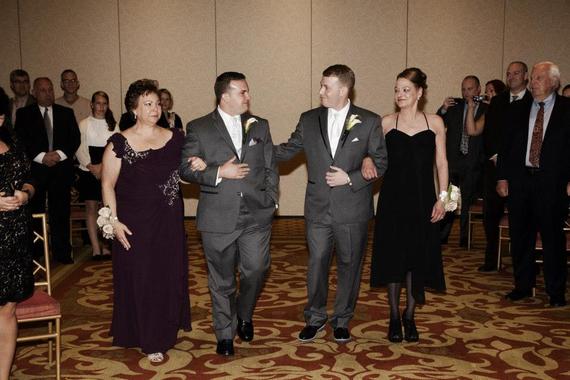 I am sitting at the Barnes and Noble just a stone's throw from New York's Lincoln Center, listening to Broadway star Kerry Butler singing songs for her album release, "Faith, Trust, & Pixie Dust." She is singing beautifully, in great voice, showcasing her vocals and her ability to connect with an audience. My heart rises, falls, swells, one song after another. And in the row of seats in front of me, Tina Fey's baby won't shut up.

The landscape of the world has changed in ways both large and small, since May 2008. We had a Bush in the White House then, now we have an Obama. The Iron Man movie had just come out, now we're looking back at countless sequels and side stories. In 2008, I could legally marry in only two states; now it is 37, as well as Washington, D.C.

But it was on May 15, 2008 that I realized I could actually become a father someday, that it might all work out.

Reflecting on that evening feels like a moment suspended in time for me. When I realized that I was sitting near Tina Fey, I reverted back to boyhood delight; I was and still am a huge fan of 30 Rock so to be near one of the brightest and snarkiest minds in the game was a real treat.

Tina was there with her daughter Alice, supporting Kerry, who I gathered was a family friend. "When can we see Aunt Kerry? Where's Aunt Kerry?" Tina ran her fingers through her daughter's hair and quietly said, "Soon honey, soon." Tina's daughter was so happy when 'Aunt Kerry' came out and sang, clapping loudly after each song. It was all very lovely, truly.

After her performance, Kerry was greeted with a big hug from her daughter, Segi. Watching this interaction, this moment not intended for me to see or share, was intimately personal. It was a mother and daughter, sharing love, in the most natural and beautiful way imaginable, in a hug.

Kerry's "Faith, Trust, & Pixie Dust" album was recorded based on songs Kerry liked to sing to Segi, to enjoy the world of Disney together. Their hug was devoid of celebrity, of stardom, of songs, but full of love. For her daughter, she wasn't "Kerry Butler," she was "Mommy."

I'm cautious in labeling someone "just a mother," because I think it belies the fullness of the maternal experience.

But when I tell you that I was able to see Kerry Butler as "just a mother," I mean that I was able to strip away all the celebrity, the stage doors, the autographs, and see that she was a woman who went through life in the same way we all do, day to day, and minute to minute. Even celebrities have families, and have to work hard for those families.What resonated most with me was this: Kerry Butler is an adoptive mother, having adopted her two daughters from Ethiopia.

So, adoption happens. It works. And it saves more than just the child, it makes a woman a mother, makes a man a father, makes a family whole.

Yes, adoption happens to families like Angelina Jolie and Brad Pitt, but it also happens to people like Kerry Butler, to normal people who go grocery shopping and have friends that call them "Aunt Kerry" and sing sparkly songs about love and a magical mouse who will accept you for who you are, no matter what you or your family looks like. It hit me, I could be a father. I could make it happen, for me.

But, I've learned, there's a giant chasm to cross between realizing that adoption is a possibility, and actually getting on the road to bringing a baby home. In the time that followed that moment of clarity in the Barnes & Noble back in 2008, several stars have aligned to make the present day, 2015, the right time to move forward in starting our family.

We've won marriage equality in New York and New Jersey, and I've met and married a man with whom I want to spend all of the time from sunrise to sunset to sunrise. 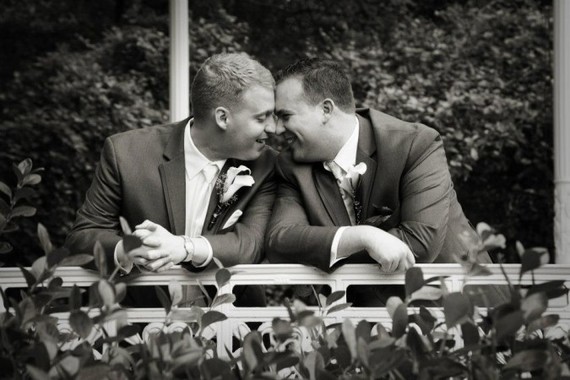 Marriage equality is so crucial, because it not only extends the full rights and benefits of marriage, equally to its participants, but it also creates the strongest foundation from which legal rights and protections can flow. That means that any child of ours is given the maximum amount of protections and coverage through our union, the same as everyone else. Not more rights, or better rights, or separate rights, but equal rights.

We've settled into our professional and personal lives in a very comfortable and supported place, and our jobs offer us the ability to think about family planning. I wrote an article for The Huffington Post more than a year ago, talking about my readiness to be a father, to start on the road to first-time parenthood.

Shortly after the release of the article, I was contacted by the team at GaysWithKids with a unique proposition. In short, we agreed that it was important to create a roadmap, of sorts, for other gay dads to potentially follow. I decided to open the doors to our lives, and write about our adoption process, step by step, in real time. And maybe not just for gay couples, maybe for all couples. It was something that had not yet been done, to follow a couple's dreams of fatherhood all the way through to its natural conclusion.

I have seen the ways in which opening our lives to the public eye has changed hearts and minds about the GLBT community; it has been, I believe, the key to winning marriage equality in so many places. I agreed, and joined the writing staff at GaysWithKids. You can read more about our specific road to parenthood, with its own set of ups and downs here.

But on this road to parenthood, we'd be foolish to ignore the ways in which mothers have left their mark on us. I did a comedic piece about the lessons that gay dads can learn from TV moms, designed to create some laughs during what has been a difficult adoption process.

My husband has learned about perseverance, determination, and courage from his mother. I've learned about compromise, patience, and hard work from my mom.

There are hundreds, thousands, millions of moments that we steal in our lives from the world around us, moments that mothers don't realize they're sharing. A hug in a Barnes & Noble, a hand through the hair of an impatient child, tiny moments that fly away from you as soon as they're done, tiny wispy moments.

As mothers, you aren't just teaching your children. You're teaching fathers, and dads-to-be, and dads-in-waiting. Men like me, like my husband, men that neither I nor you will ever meet, men in faraway places and men around the block, who have everything to offer a child. So please, if you don't mind, keep teaching.

We need your inspiration when the road is bumpy, when the trek is difficult, when the days are long. You never know when we are watching, furiously scribbling mental notes on how to tie a braid, swaddle and soothe a crying baby, convince a child that it's his idea to finish his broccoli.

Or simply learning the easiest and fastest ways to tell a child that he or she is loved. Love teaches us all, even when you think no one is watching.

After all, it's a small, small world. 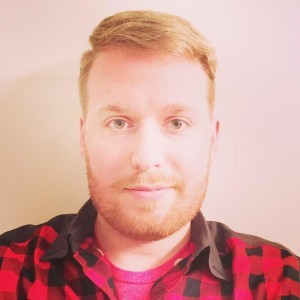 This article was originally published in The Naughty Mommy Blog, a site geared towards Moms with attitude. For more information, give them a follow on Facebook and Twitter.

And to follow on Anthony and Dominic's road to becoming first-time-dads, read exclusively here.