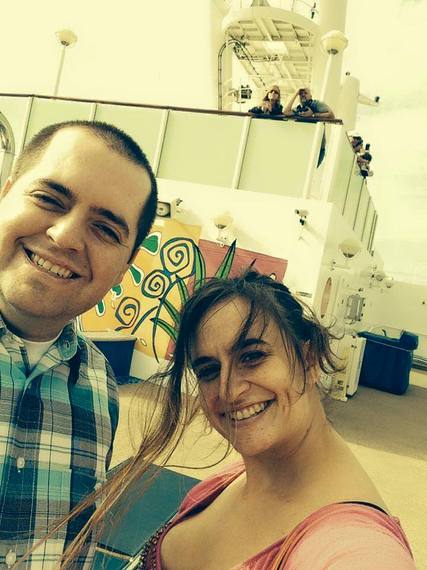 (Harry Fisher along with his sister, Heather, during a happier time.)

"[I] Just wanted to post a picture of Harry and I when we were...happy. Harry died alone, having never had any relationship of any kind as far as I know. He believed in the Mormon religion wholeheartedly and...I can only imagine how lonely he must've been and how much inner struggle he must've gone through to try to change himself before accepting a life of solitude & then choosing no life at all."

Those were the words written by Heather Fisher, sister of Harry Fisher, on a Facebook page that serve as a memorial to Harry's life. Harry, a 28-year-old openly gay active Latter-day Saint from Salt Lake City, ended his life on February 13. While Harry had been out to close friends and family for some time, he had come out publicly on social media only a month prior to his death.

The Church of Jesus Christ of Latter-day Saint's recent assault on its LGBT members provides a problematic backdrop to the tragedy of Harry's story.

Last November, the church enacted a worldwide policy that mandates church discipline (the process that precedes excommunication) for all LGBT members married to someone of their same gender; it also bans children of LGBT individuals from certain saving rites, including baptism, until those children turn 18 years old -- and only then if they publicly disavow the relationship of their LGBT parents.

Although the new policy provoked thousands of straight and LGBT Mormons to officially resign from the church and untold others to walk away or diminish their involvement, the leadership of the church has persistently doubled down.

While many Mormons obediently (if quietly and little grudgingly) support church leaders, some vulnerable LGBT members are seeing no other way out than to take their own lives. In late January, church-owned Deseret News reported that there were claims of 32 LGBT Mormon youth taking their own lives; the group Mama Dragons (an organization of LDS mothers of young LGBT members) now report that figure may be as high as 43.

Well-informed initial reports suggested that the essence of the policy had been dictated by the seriously ailing prophet Thomas S. Monson and imposed, unvetted, on the governing quorums of the church, and could be "adjusted" as it was incorporated in the Handbook of Instructions for local leaders. Such hopes were dashed in January when Elder Russell M. Nelson, the president of the Quorum of Twelve Apostles and next in line to be president of the entire church, pronounced it a revelation from God, which gave it almost doctrinal status.

The doubling-down continued a month later as Apostle David A. Bednar declared, "There are no homosexual members of the church. We are not defined by sexual attraction. We are not defined by sexual behavior. We are sons and daughters of God. And all of us have different challenges in the flesh." Bednar, just 63-years-old, will likely someday be the president and prophet of the church, a calling that is currently based on seniority and endures until death.

Just a week earlier Elder Dallin Oaks, a senior apostle and respected jurist, responded pointedly to accusations from the distraught parents of suicide victims that only God can judge whether the church policy and its leaders should be held accountable for the suicides.

While it's difficult to know exactly what triggered the deaths, the tragic circumstantial linkages between the hastily formed policy and intemperate endorsements are easy enough to see. They merge to create a kind of toxic soup for vulnerable LGBT Mormon youth -- one that increases despair and risk for potential negative health and mental health outcomes.

What dismays many is that Mormon leadership have had the opportunity to become informed and educated about the risk factors for LGBT youth -- and they have chosen not to act. Latter-day Saint officials were given access to rigorous research done by the Family Acceptance Project as early as 2008.

This evidence based research is the only research of its kind to be listed as a best practice by the American Foundation for Suicide Prevention, and clearly outlines the behaviors that put LGBT youth at high risk for negative health and mental health outcomes, including depression and suicide. Rejection (such as denying LGBT individuals exist) ranks high on the list of behaviors that increase risk for youth.

In 2012 the Family Acceptance Project released an LDS version of their research booklet that helps Mormon parents understand and apply the life-saving research to their LGBT kids in a way that aligns with Mormon doctrine. This booklet, available for download at no cost -- like the preceding research in 2008 -- was largely ignored by both LDS leaders and those who work at the highest levels of the church's social services organizations.

The one exception is a short article that appeared in the Deseret News in January, on the heels of the reported suicides.

That has not prevented rank and file Mormons from reaching out to at-risk LGBT members. Responding to Elder Bednar's remarks that LGBT people don't exist. One group is planning a protest gathering at the church semi-annual general conference in April to underscore the fact that LGBT Mormons do exist and that careless language can cause real harm.

Chatrooms and online groups supporting LGBT Mormons and their families have sprung to life. Others are posting personal messages: "If you are struggling because of the LDS Church position on LGBT members, you can call me anytime. You are loved. You are needed."

Prominent Mormon blogs are abuzz. Rational Faiths dedicated a portal on its homepage to the "LGBTQ Mormon Crisis." It includes scholarly articles aimed at helping local leaders understand the severity of the suicide crisis.

Many are predicting that the church's latest attack on the LGBT community will, just like the misguided involvement in Proposition 8, do more to create understanding and inclusion of LGBT members than any grass roots initiative that could be organized. There is a growing sentiment that leadership is clinging desperately to notions that, in the eyes of many Mormons, are not only inaccurate, but un-Christlike.

As optimistic as all that is, it doesn't do much for Harry Fisher or those like him.

"Harry and those like him feel like there is something wrong with them," Heather Fisher told me in a conversation. "They try to change themselves to please the Church... We need to remind people to love their kids for who they are...and we need to love one another unconditionally, like Christ commanded. I think we've forgotten that."