Studies show that 10 to 15 percent of women develop postpartum depression. I was one of them. In retrospect, I'm abashed that it took us a few months to realize that what I was going through was worse than the garden-variety not sleeping enough. I wrote a poem during each week of those early months, a practice which I continued through our son's first year. When I reread those early poems now, I wonder how I could have managed the clarity to write those lines without the self-awareness to see that I wasn't okay.

In week one, I wrote "El Shaddai (Nursing Poem)," which asked whether God was overwhelmed when Her milk first came in. In week two I wrote "Newborn Sestina." What better form for the endless repetition of caring for a newborn than the sestina with its neverending re-use of end-words? The words I chose were form, dark, change, new, needs, all. In week three came "Night Feeding," drawing on Psalms to cry out that "as a hind longs for water / my soul longs for sleep..." And then there's "Besieged:"

Seven weeks in
I am rubble, strafed
by a round-cheeked pilot
who attacks at random
with his air-siren wail...

There was wonder. Of course there was wonder. But there was also a kind of bleakness I had never experienced before. And because I was caught-up in depressive thinking, I assumed this was just what it was like to become a mother. Becoming a mother is de-centering. You're no longer the center of your own universe, no longer the person who determines what you do and when. I figured that I had traded my old life for this new one, and that I would never be the same. 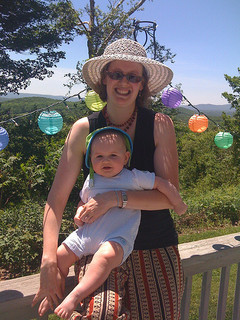 My family pushed me to consider getting help for the depression. And I did, and life turned around. The whole journey of our first year is chronicled in Waiting to Unfold (Phoenicia, 2013), and when I give readings from that poetry collection now I marvel both that any of us survived those first months -- and at how much growth and transformation that one first year contained. "You," I wrote as that year ended, "are the joy I never knew I didn't have." ("One Year")

The changes enacted by motherhood are everywhere in me. I experience other children differently. I pray differently. I read books differently. I encounter television shows differently. I engage with the news differently. I respond to natural disasters and to news of trauma differently. And although I've regained almost all of the autonomy which I mourned during those early months -- I can come and go during the day; I shower without anyone needing me; I have the spaciousness to write poems on all kinds of subjects; I sleep at night -- I'm still not the center of my own universe. Not in the same way that I was.

This is not to say that my entire life orbits around our son. That wouldn't be healthy for either one of us. But his presence in the world and in my life has subtly changed the way I experience everything. Motherhood has changed me down to the cellular level. I accept that, as metaphor. I'm increasingly coming to recognize that it's true medically and spiritually, too.

Postpartum depression is long behind me, but my emotional and psychological landscape has forever changed. Maybe it's a function of my endocrine system, those floods of pregnancy and postpartum hormones. Maybe it's brain chemistry. The cause doesn't really matter. Here's what I know: now that I have experienced serious depression and anxiety, I'm always aware that I could be back there. Having trod that ground once means my psyche knows the way to return.

For instance: there was a week, this past fall, when I experienced three nights of unexpected and rare insomnia. I was up in the night for hours, unable to count on the sleep which has always been my easiest release. Panicked, tearful, my chest gripped by the iron fist of anxiety I had forgotten that I had forgotten, I emailed a mothers' email list to which I belong. Help, I said. I can't sleep and I don't know what's happening or why it's hitting me so hard.

One of the other moms shared the term she'd coined: Post-Traumatic Sleep Disorder. For those of us who suffered postpartum depression, who thought we'd lost ourselves entirely in the trenches of a battle we didn't expect to be fighting, lack of sleep can be a kind of trigger. It reminds us of those early days, and our panic escalates.

As I read her words, recognition flooded in. A few nights without sleep, and I clicked right back to where I'd been when our son was new, when sleep was nowhere to be had, when I thought I would never feel good again. No wonder I was overreacting to something many people experience all the time. I wasn't just reacting to these few nights, I was reacting to the whole newborn experience all over again. Inhabiting it again, with all that it entailed.

The insomnia is conquered, for the moment, thanks to good fortune and a doctor's smart suggestions. But some fear remains. It may take a while to dissipate. The capacity for heightened sadness remains, too. Elizabeth Stone famously wrote that "Making the decision to have a child... is to decide forever to have your heart go walking around outside your body." Not only because I wish I could protect my own child from sorrow and pain, but because I wish I could protect everyone's children. And I can't.

For a congregational rabbi, this sharp and impossible yearning seems at first blush not necessarily helpful. This doesn't help me hold it together when I'm preparing for a funeral -- or when I'm getting ready for Hebrew school. But in my first year of rabbinic school, when I learned hospital chaplaincy for nine months, one of my older colleagues told me that becoming a parent someday would be the greatest theological education I would ever know. I think this yearning is part of what he was talking about.

One of Jewish tradition's deepest metaphors for God is God-as-parent. We sing Avinu Malkeinu, "Our Father, Our King" -- intertwining a sense of God as majestic judge with a sense of God as the parent who cradles us in love. Every mezuzah bears the letter shin, for the name El Shaddai, which seems to come from a root meaning "breasts." God is the breasted one, the one Who yearns to feed us. "Even more than the calf wants to suckle, the cow wants to give milk," said the sages of the Talmud. It's a metaphor for prayer (even more than we want to ask for blessings, God yearns to give them) which became clear to me in a whole new way when I was a nursing mom.

I think this impossible yearning is part of what we mean when we call God our mother, our father, our parent. The love I feel for my child is a microcosm of the love which God feels for us. And my anxious yearning to protect my child, to protect everyone's child, is a scant shadow of what God must feel in gazing upon we creatures of free will and dangerous choices. Becoming a parent has changed the way I think about God. 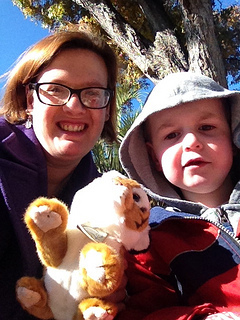 That's one of the reasons why I wouldn't trade this life for the one I knew before, the one without antidepressants, the one where I sometimes stayed up until two in the morning just because it was fun, the one where I got to make all the choices about what I would do and when and how. The one where I could travel the world without feeling the pangs of separation. The one where I could minister to sick children as a hospital chaplain without relating intimately to what their parents must be enduring too.

I can no longer imagine my life without Duplo trains and 4-year-old-humor. Without the gliding rocker where we used to nurse and nurse and nurse as the long night unfolded -- and where now we still rock a bit before bed, his long gangly body tucked into mine, all elbows and knees. The expanded capacity to feel anguish is linked with an expanded capacity to feel love. Love for our child; love for everyone's children. I began to glimpse that during our first neverending year:

Daily I expand how much I can love
your toes, your cough, your raised eyebrow.
It feels dangerous, prying my chest open
to make room for everything that's new
and you're in the world now, the risks
as numerous as the stars in the sky,
but with fear come delights, too --
your face smeared with prunes
almost too luminous for me to bear... ("Mother Psalm 4")

Someday our son will be old enough to read these poems. I don't know what he'll make of any of this. But I hope he'll know that he is worth every minute, every sleepless night, every tear. That he changed me in ways I would never seek to un-do. That the luminous quality of this parental love has given me a glimpse of the aching, tender heart of God.