A miniature, depressed, wobbling mummy hides in a patch of high grass. His targets, bliss with ignorance, continue pushing their troops forward. The mummy knows patience well and as his targets group together, he sees an opportunity. The mummy rallies his teammates, issuing a barrage of 'pings' on the enemy units and in the blink of an eye flashes into the center of his enemies. Casting out his bandages the mummy entangles and roots his enemies in place -- a perfect opener that wins his team an important fight and secures a sweet victory.

Lauri "Cyanide" Happonen, a founding member and former jungler for the professional eSports organization Fnatic, is at the steering wheel of this little mummy. To those who are unfamiliar with the multiplayer online battle arena (MOBA) League of Legends, this may seem confusing. You may be thinking, "Why would anyone want to watch someone else play a video game?" However, for about 2,500 live spectators, Cyanide's gameplay equates to their idea of entertainment. 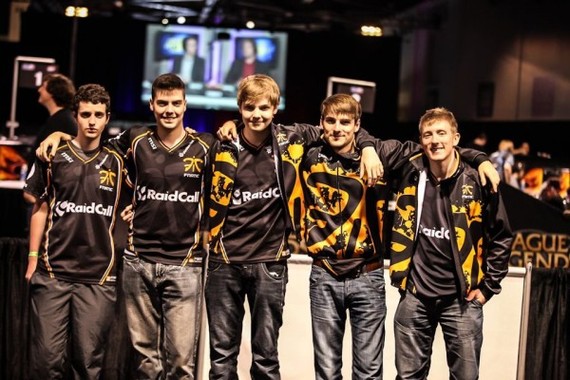 Image via SK Gaming - Cyanide in the middle

Cyanide, a Season 1 World Champion and now retired player from the professional League of Legends scene, still streams himself playing the game on Twitch.tv, a live-streaming video platform that was purchased by Amazon in September 2014 for $970 million. To date, Cyanide has had over 9.5 million collective views on his Twitch channel and currently over 150,000 people follow him, meaning they each receive an email notification the second he starts broadcasting. On Twitter there are around 5,700 tweets per second and important information can easily be drowned in a sea of tweets from all the people we follow. On Twitch, those email notifications create a direct link to the streamer's live broadcast.

As one of the most well-known European players, Cyanide has been able to leverage his clout and focus on streaming and making YouTube videos as income generators. In the past three months, Cyanide has created eight tutorial-style videos on YouTube, totaling over 900,000 views and has amassed over 40,000 subscribers.

But how do these social figures translate monetarily? Can video gamers actually make money from broadcasting themselves playing?

While most streamers and professional eSports players shroud their earnings, a handful of streamers are fairly transparent about their streaming income. For instance, 23-year-old Michael Santana -- better known as "Imaqtpie" -- has reported over $8,000 from streaming in just one month. As one of the most popular streamers on Twitch, his broadcasts often net anywhere from 18,000-40,000 live viewers and his channel has seen over 83 million collective views.

On Twitch, streamers have multiple avenues to increase their profits. Let's start with the basics. Twitch streamers need to apply to become a verified Twitch Partner which earns them a share of the revenue they generate from broadcasting and allows viewers to pay a monthly $4.99 subscription fee to the streamer. Subscription fees grant viewers additional perks such as emoticons in chat, their username broadcast on the live stream, and access to subscriber-only chat mode.

Becoming a Twitch Partner is no easy task. As a pre-requisite the streamer must have an average concurrent viewership of 500+ people and broadcast at least three times per week. That's a massive hurdle. A random sample showed that only 34 out of the 900+ League of Legends broadcasts pulled over 500 concurrent viewers. Out of those 34, only half were seeing over 1,000 concurrent viewers which has a direct impact on the amount streamers can make from showing advertisements.

Twitch takes into account an estimate for the number of viewers using ad-blocking extensions and produces an "effective cost per 1000 impressions" (eCPM). Streamers earn better eCPM the longer they stick with the partner program and the larger their viewership grows. Starting off, partnered streamers can expect an eCPM in the range of $0.70-$1.40. The more popular streamers pull in from a $1.00 - $2.50 range. The standard subscriber rate of $4.99/month starts off on a 50/50 split between Twitch and the streamer, but is open to scaling with their viewership and streamers can earn up to 60/40 -- about $3.00 per subscriber.

The streamer decides when they run advertisements, giving them more control over their revenue and brand. If a streamer with 2,000 concurrent viewers and $1.00 eCPM runs three commercials per hour and streams for eight hours a day, five days a week, they can earn about $240 a week or $960 a month from advertising revenue. However, a popular streamer with 20,000 concurrent viewers and $2.00 eCPM on the same schedule would make $40/hour or $1600/week or $6400/month.

And advertisements are only one revenue path. 100 subscribers would equate to $250 extra per month for new Twtich Partners, while those on the 60/40 plan could net $3000 extra per month from 1000 dedicated subscribers. Subscribing to a channel is a way for viewers to help support the streamers they enjoy and almost every streamer has a donate button via PayPal. Many streamers will have a leaderboard showcasing their highest monthly donations, with some receiving thousands in donations per month.

Aside from advertisements and subscribers, streamers have three more options to pull in money. Sponsorships are one of the primary contributing factors to streaming revenue. They either partner up with the eSports organization as a whole -- such as the eSports team -- or the individual streamer. These sponsorships fluctuate greatly and as a result are more of an unknown variable that adds on to streamer incomes. As an example, the League of Legends team "Team Dignitas" stated their first sponsorship was for $18,000 but have grown to accumulate over $1.6 million in 2014.

Streamers also have a digital space below their broadcast to include information, links, and other media. For example, Imaqtpie has a donation button, sponsorship links and images, and affiliate links to Amazon: 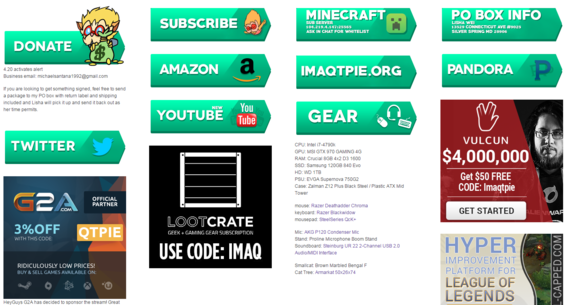 Amazon's affiliate program offers 4 percent on anything purchased within 24 hours and scales up to 8.5 percent depending on how much monthly traffic you can send them. If 100 people per month purchase $500 worth of gaming gear listed on his channel page, Imaqtpie would earn $3,250 per month just from Amazon's affiliate program. Similarly, the gaming marketplace G2A offers their own referral program that specifically favors the gaming industry and offers three ways for streamers to make money of their links.

The fifth and final way streamers turn their time into dollars is by compiling some of their footage from streaming into videos to host on their YouTube channel, where they earn money based on YouTube's advertisement model. Under this model, streamers can make an average of $0.90 CPM for video banner ads and an average of $6.50 for pre-roll video ads. 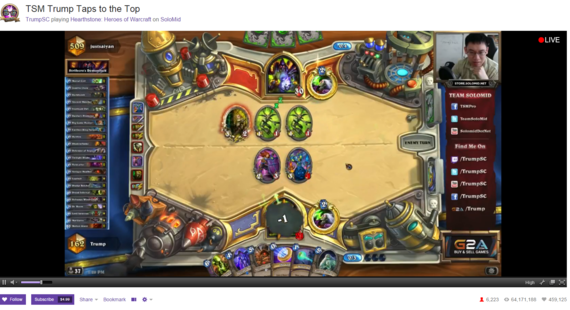 Jeffery Shih, aka "Trump," is one of the most popular streamers in the gaming niche, notorious for his Hearthstone videos. In an interview with Forbes, Trump explains that top streamers easily make $100,000 and more annually, also confirming that sponsorships make up a big part of this income. Some players also offer coaching lessons for a premium, with reports of $1,500 per month for private StarCraft II lessons. But reaching this level is no easy task and requires years of building a following, developing an on-camera personality, and above all else, being consistent.

Just as Lebron James fans love watching highlight reels, the same goes for fans of professional eSports players. The entertainment factor is there; drama is devoured, rivalries sprout left and right, play-makers are revered as gods, and ultimately it's the fans who will decide the longevity of eSports and the viability of streaming video games as a career path.