Credit is playing an increasingly important economic role in Americans' lives these days, and according to a recent study, your credit history can be a major factor in what you pay for home insurance.

For the second year in a row, a Quadrant Information Services study, commissioned by insuranceQuotes, examined the average impact your credit-based insurance score has on what you pay for home insurance. The study found that if you have a fair -- or median -- credit score, you may pay 32 percent more for home insurance on average than someone with excellent credit. That's up from a 29 percent increase in 2014. 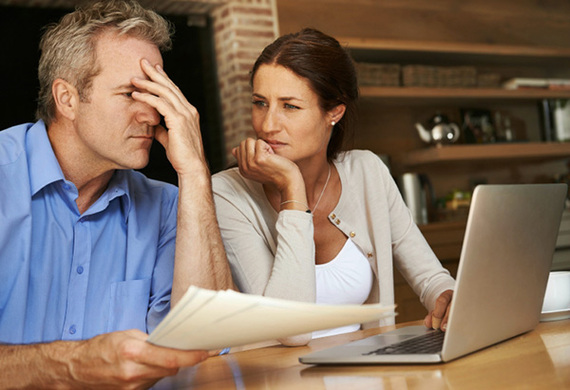 Also see: If you have poor credit, you may pay nearly double for home insurance (2014 study)

But if you have poor credit, rather than excellent credit, your premium may increase by an average of 100 percent (up from 91 percent in 2014).

Many consumers aren't aware their credit history is being used this way in most states. According to a 2007 survey conducted by consumer advocacy organization Consumer Federation of America, just 57 percent of respondents were aware their credit could affect what they pay for home insurance.

A credit-based insurance score is different from the credit score you may be used to seeing when applying for a loan or a new credit card.

According to Lamont Boyd, insurance underwriting expert at FICO, your credit-based insurance score is derived from a combination of factors in your credit reports and is used to help insurers better determine the likelihood you will file a future claim.

According to FICO, about 90 percent of home insurers use credit-based insurance scores in states where it's allowed. (California, Maryland and Massachusetts don't allow the use of credit in setting home insurance rates.)

According to Boyd, the foundation of credit-based insurance scoring has been steadily gaining traction as a rating factor since it was first introduced in the early 1990s, when FICO conducted numerous studies with insurers across the country to determine whether there is a statistical correlation between a person's credit and the likelihood he or she will file an insurance claim.

"It has been proven statistically time and time again that the way someone manages his or her credit correlates very strongly to whether or not they will have a future homeowner loss," Boyd says. "Not that every insurer uses this data the same way. They all have their unique models. But the underlying principle is the same across the board."

Your credit-based insurance report is created using financial data collected by the major credit bureaus such as Equifax, Experian or TransUnion. The data may include:

"I've been talking to actuaries about this topic over the last few days, and it's quite remarkable how effective these scores are at predicting losses," says Jim Lynch, chief actuary with the nonprofit Insurance Information Institute. "The higher credit score, the better the person's credit and the less likely they are to incur claims. And the worse the score, the more likely they are to file a claim in the future."

How much credit affects your home insurance rate

The insuranceQuotes study reviewed three tiers of credit: excellent, fair and poor. How these tiers impact your home insurance premium varies widely from state to state.

The following five states showed the greatest average premium increase if you have fair credit as opposed to excellent credit.

The premium increase you see when your credit drops from excellent to poor is even more dramatic. Here are the top five states with the biggest increases.

Again, Lynch maintains that because of the different ways credit-based insurance scoring is used by various companies, the score will play a disproportionately more significant role in some states compared to others.

In Boyd's opinion, these state-by-state differences indicate "the competitive nature of the insurance marketplace."

In other words, insurance companies in certain states may weigh credit-based insurance scores less heavily in order to be more competitive with pricing.

"Insurance companies want to write as much business as they can, and it's clear to me that in certain states they want to be more careful about how they price various risks," Boyd says.

On the whole, the data indicate that in a majority of states credit is becoming more of a rating factor, especially for homeowners with poor credit.

"And that's because its value as a predictive figure is becoming more and more widely known," says Lynch.

Also see: CLUE report: The secret report that affects what you pay for insurance

Not everyone is a fan of credit-based insurance scoring. In fact, its harshest critics argue that using someone's credit history to determine risk is unfair and irrelevant.

For instance, Amy Bach, executive director of San Francisco-based nonprofit United Policyholders, has long maintained that credit scoring primarily hurts low- to moderate-income earners, since they are the ones with typically lower credit scores.

"The damage that leads to many home insurance claims is often random, sudden and accidental -- things like break-ins, slip and falls, or weather events," Bach says. "There is no way an individual's credit score has a causal connection to those events."

Lynch disagrees, and stresses that the predictive value of someone's credit score is no different than other factors commonly used in setting insurance premiums. He contends auto insurers use similar price-setting methods.

"By the same standard of fairness, people with poor credit records should pay more than people with excellent credit," Lynch says. "The data is just as strong, perhaps stronger. Credit information is an excellent predictor of future losses."

How to improve your credit and credit-based insurance score

No matter your stance on the credit-rating issue, consumers can improve their credit-based insurance scores the same way they can boost their regular credit score. A few tips include: