In Illinois, the Illinois State Highway Toll Authority controls the highways that do not receive any federal funding but are paid for through tolls charged of users. Illinoisans are notoriously not very fond of these toll roads, with the tolls costing between $0.30 and $3.80 per trip, which can add up when drivers must make round trips involving several toll roads. Illinoisans do not have to pay the most out of any states' residents when using toll roads, but they certainly don't pay the least, either.

Illinois has five roads that fall under that category (four interstates and one non-interstate) run by the Illinois State Highway Toll Authority (ISHTA), including the Ronald Reagan Memorial Tollway (I-88) and the Tri-State Tollway (I-294). The Chicago Skyway is operated by the Skyway Concession Company. There also are toll bridges and tunnels in Illinois. Other states may have multiple tolling authorities, such as California, and some, such as Kansas, have only one tolling authority. Several roads in Texas and northern states such as Minnesota, New York and Michigan are international toll highways connecting the U.S. to Canada and Mexico.

In Illinois, there are 10 total toll roads (including tunnels, bridges, interstates and non-interstates) that comprise nearly 377 miles of road, according to the U.S.Department of Transportation (USDOT). The state's average median toll payment for passenger vehicles is $2.05, according to information from the National Conference of State Legislatures. This means that Illinoisans themselves pay for the organizational operations and infrastructure upkeep and development of these roads directly, by paying for driving on them, instead of the state receiving money from the U.S. federal government to pay for them.

Illinois is tied for the seventh-highest number of toll roads out of all the states that have any toll ways with Delaware and Oklahoma. Texas has 66 toll roads, the highest of any state, and Ohio, Kansas, Maine, Florida, North Carolina, Rhode Island, Alaska, Iowa and Missouri all have only one. Illinois has the sixth-highest toll way mileage of any state with toll roads. The state with the longest toll way system is Pennsylvania with 630.74 miles and the shortest is Missouri with just over half a mile of toll roads. Illinois has the 18th-highest average median toll for states where information was available. The state with the most expensive average median toll is Alaska at $12.00, and the least was Georgia with a $0.50 average median toll.

The Illinois Tollway, under ISHTA and the office of the Inspector General, runs most of Illinois' toll roads. According to their website, the fees that users pay to drive on the Illinois Tollway are used to pay for services such as Illinois State Police, I-PASS customer service, and the maintenance of and construction on the roads.

A promise was made that once the bonds used to build the original 187 miles of the Illinois Tollway were paid off, the roads would become freeways. The promise was well-intentioned, but shortsighted. The Illinois Tollway is a user-fee system and receives no state or federal funds for maintenance and operations, so tolls are necessary...Unfortunately, there is no such thing as a "free" road. Without the Illinois Tollway, the state would need to raise the gas tax by about 9 cents a gallon statewide to pay for maintenance and operation of existing Tollway roads - or 11-12 cents a gallon if the tax was only applied to the Tollway's 12-county service area. To fund the infrastructure improvements included in this capital plan, the state would need to raise the gas tax by more than 20 cents a gallon.

The I-PASS and E-ZPASS programs allow for users of the Illinois Tollway to drive at a continuous pace without having to stop to pay the tolls in cash. Indicators are attached to car windshields and toll booths keep track of who has driven where when. Drivers are billed for their toll usage later and can receive a fine of $75 for unpaid tolls and further penalties of $20 if fines continue to go unpaid, according to the Illinois Tollway website. Generally, pass users must drive through specific lanes to keep the flow of traffic moving.

There are a total of 5,880.66 miles of toll roads throughout the United States, most of which are highways and/or bridges and tunnels operated by the transportation authorities of the states through which they run, some of which are part of the national interstate system. Twenty-two states do not have any toll highways (though some of those have toll bridges or tunnels), including Iowa, Michigan, Missouri, Wisconsin and Kentucky. Thirty-one states (including the District of Columbia and Puerto Rico have highway tolls.)

Check out the list of all states' (with toll ways) toll road information at Reboot Illinois to see which residents of which states pay more or less than Illinois in tolls. 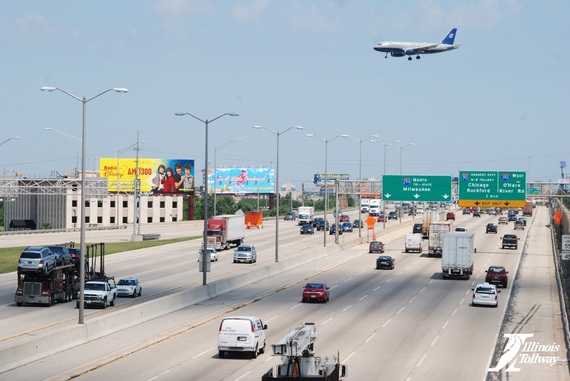